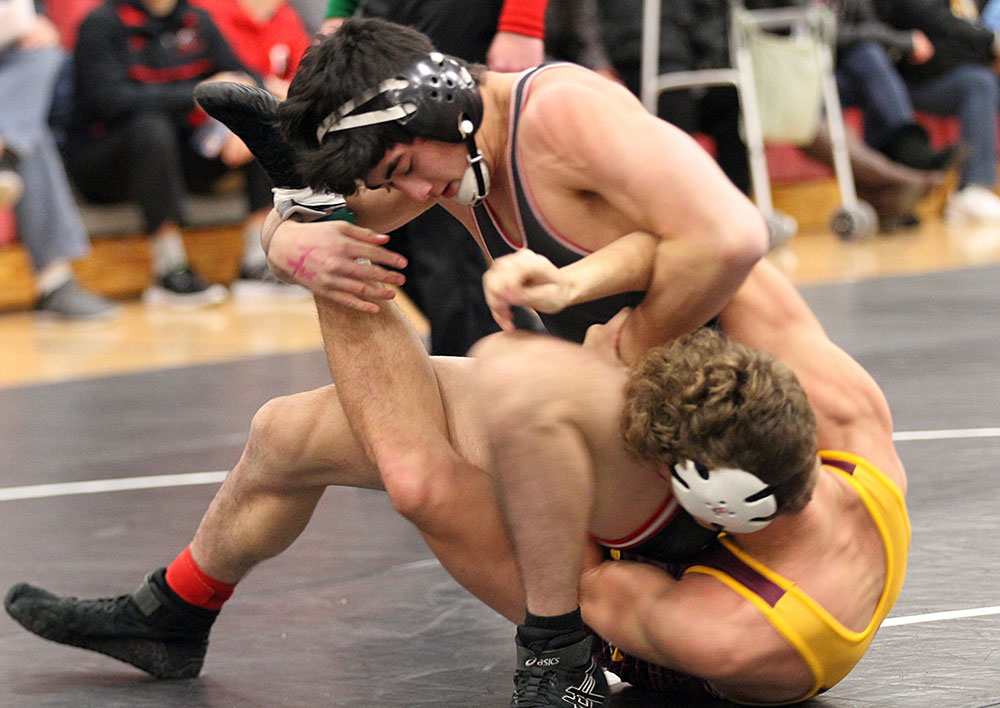 Barrington’s premier 152-pounder needs little introduction to fans who subsist on a regular diet of Illinois Matmen, IKWF, and any other item of your wrestling menu.

Although he came through the Broncos club as a youngster, it was his move to the big mats at Barrington when he began to draw attention – beginning with a sensational rookie season which ended abruptly when he fractured his growth plate in mid-January.

Since then, the Broncos senior hasn’t looked back.

“I learned a valuable lesson about not paying attention to an injury properly by keeping it to myself too long, and in mid-January, when an x-ray said it was broken, there went my season,” recounts Hartman, who still was able to beat a pair of eventual state medalists during his debut season, Darvell Flagg of Joilet West and Ian Mullen of McHenry.

Hartman began in the sport at age six, and now, in his twelfth season, he’s amazed at how quick those years have gone, particularly his time at Barrington.

“It almost feels as if my freshmen year just began just a couple of weeks ago, it really has been a blink of an eye,” admits Hartman.

Fans of the Broncos are thrilled Hartman’s career still has nearly three months left of what has been a magnificent time wearing the Barrington colors, as does its head coach, Dave Udchik.

“Markus has been the cornerstone of the program, and he’s a once in a lifetime kind of kid,” begins Udchik, now in his fourth year, two of which when Hartman collected a pair of state medals.

“He is a funny but quiet kid, (very) humble, and one who leads by his actions as he is not a huge rah-rah guy.”

“Udchik is great. (He’s) different from other coaches because team bonding and doing what’s best for your team is most important, and that’s the way I feel about being a part of Barrington wrestling – because I feel like my teammates are my brothers,” says Hartman.

Hartman has established himself as one of the top two 152-pounders in the state, as well as the nation’s tenth best according to InterMat.

Thanks to an impressive all-around game and presence, along with his composure, energy, first-class technique, a sublime finishing touch, and the capacity to be an offensive and creative force at a moments notice, Hartman, with his 45 wins from a year ago, now stands at 120 and on pace to break the program record of 148.

The creative part of Hartman was illustrated two years ago when as his teammates, who call him ‘Ninja’ invented the O.G. Clutch move, which he admits to hitting just three times thus far in his career.

“The first time was my sophomore year at the McHenry Duals, then later at state, although I wasn’t awarded any back points for it,” recalls Hartman.

He would later demonstrate for and on Dan Fulscher on the Assembly Hall floor, to which the 2000 Hall-of-Fame inductee later admitted that it WAS a legal move.

“I guess at that point I officially invented a new move,” laughs Hartman, who would use it two weeks ago during his 5-0 victory over Baylor Fernandes of Lockport in the final of the Moore-Prettyman.

In an attempt to keep his secret safe, the Broncos’ mad scientist would not divulge the O.G. Clutch to this author.

Hartman would move to the Poeta Training Center during his freshmen season, and the rest, as he says, is history.

“I’ll spend three-four days a week (there) during the offseason, once per week during the high school season, and along the way, there’s been private sessions with Mike and Jon Henslee, and that has been THE main reason for my improvement and success,” boldly states our featured subject.

“With Poeta, the thing about him is his feet – they are the best around – and although I am not a feet guy, I’ve improved so much just being around him.”

Hartman thus far has collected two conference, regional, and sectional championships, to go along with countless tournament championships, as well as his fifth-place state medal two years ago at 126 pounds, which he followed up with a successful trip to Fargo where he earned second-place honors in freestyle, and a third-place finish in Greco.

“Poeta and Henslee have been in my corner each time I’ve competed at Fargo, it’s just another reason I think so highly of both of them.”

Obviously the biggest loss and disappointment of his career came last season when he, and Montini Catholic star, Will Lewan faced off on center stage during the 145-pound state final in Champaign.

Lewan would defeat Hartman 4-3 in late December in the final of the prestigious Berman Holiday Classic for his first loss of the season, then add another to his record when the two met in the last match of the tournament on that Saturday night.

“We knew we would have to take Lewan down to win, which wasn’t an easy thing to do, but we went after him, but fell short against a great opponent,” says Udchik.

“Markus took the loss hard, but it didn’t keep him down long.”

In that contest, the two wrestling giants went through a scoreless first period as each tested and teased the other, but an early escape, followed by an ankle-pick for a take-down gave Lewan a 3-0 advantage.

A third period escape proved not enough in a 3-1 loss.

“I’ve watched that final twenty times since, and like any tight match against a great opponent, it’s the little things that make the difference, and it’s clear to me that better position and more movement were two things I could have done better.”

“If all goes to form, and we’re both at 152 when the postseason begins, maybe we’ll meet again in the state final – but it’s a long grind until then, so I’ll just take it one match at a time until then.”

It was just after his state medal performance during his sophomore season that West Point would come calling with a letter of their interest directed to Udchik.

“(They) would call and talk with me all throughout my junior year, and with the help of Josh Fiorito, who put in a good word with West Point assistant, Chris Chionuma, and his former Lindenwood teammate, it wasn’t long before I committed to go there,” says Hartman.

Fiorito was a 2007 Barrington grad, who was a two-time state qualifier and state medalist as well.

Hartman says there was mild interest in a few other universities, but West Point was his first choice all throughout.

Although there will be plenty of time for him to cement his final plans, he figures a degree in engineering, or even special forces may await when the time comes.

Until then, Hartman is all about helping the Broncos win a MSL and regional crown, and later on a trip to the dual-team state tournament, following a serious run at a state title, which would be the Broncos second after Wally Pollock did so in 1991.

“Markus is a team player (first) and will do anything for the team, including wrestling up a weight class and looking for the toughest matches, and we’ve been very fortunate to have him be a part of our program.”

“He’s a terrific young man, who comes from a great family, and it’s been a real kick watching his ride thus far.”