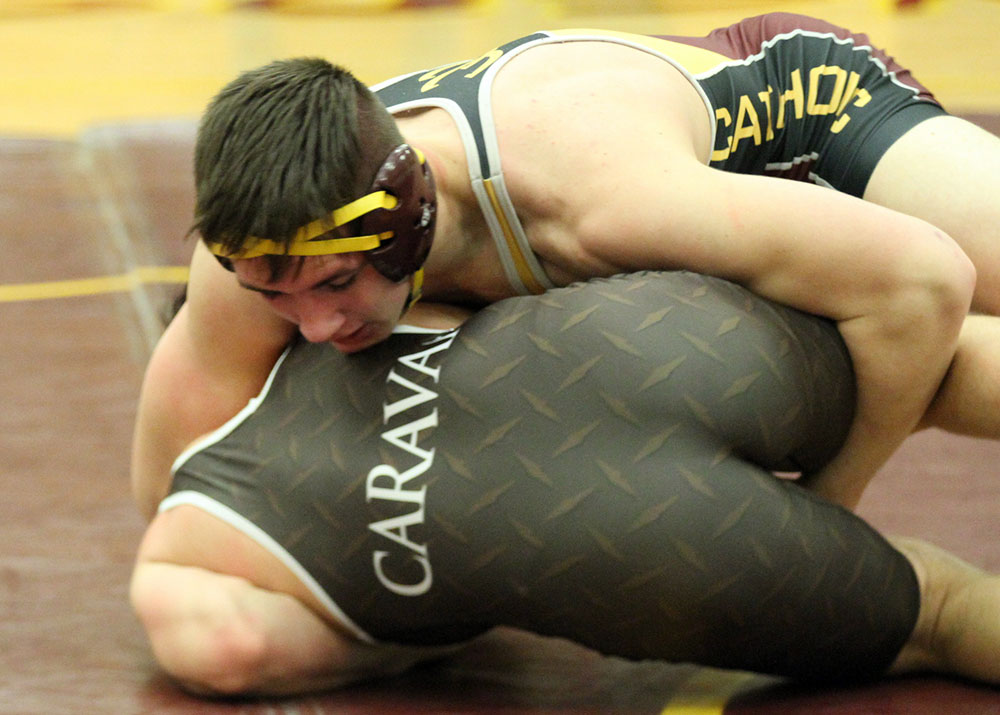 Montini has been a state power in wrestling for nearly 20 years, so the pressure to win is nothing new for wrestlers who put on a Broncos singlet.

Their approach: bring it on.

With most fingers in Illinois pointing at Montini as the team to beat in Class 3A this year, the pressure to win gets ratcheted up even higher. So far, the Broncos have been more than up to the challenge.

Montini improved to 7-0 in duals with Saturday’s sweep of Providence, Mt. Carmel, and Bowen, topping those three teams by a combined score of 206-18.

“We’ve got some things to work on but we’re doing well,” Montini coach Israel Martinez said. “Wrestling for Montini, there’s some pressure on you and sometimes that makes it tougher to compete, but we have to get used to that so we can compete to that high standard.”

Montini won 72-6 over Providence, 53-12 over Mt. Carmel, and 81-0 over Bowen. Mt. Carmel and Providence both beat Bowen, but did not face each other since the two teams will square off in a dual in late January. 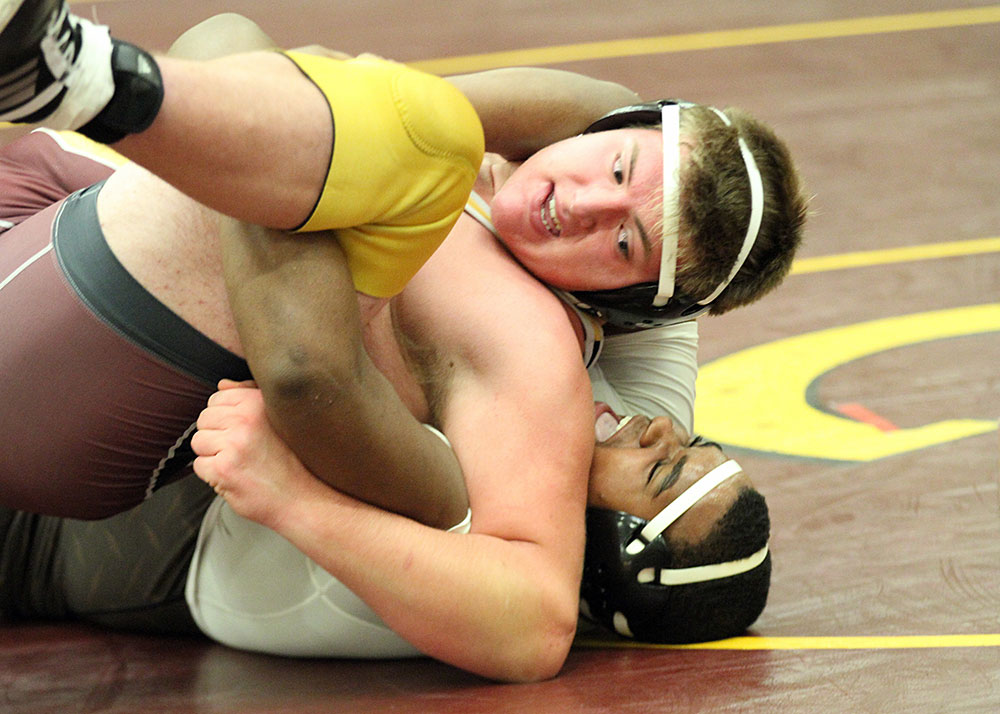 You can toss a rock into the Montini practice room and likely hit a highly-ranked wrestler, but none stood taller on Saturday than Stiles.

Currently ranked second at 145 in Illinois Matmen’s POWER rankings, Stiles won 5-2 over Dominick Ambrose of Providence and then won 1-0 over Mt. Carmel’s Kendall Coleman, who is currently ranked No. 1 at 145.

Stiles lost to Coleman at last year’s individual sectional in a 7-2 decision at 138 pounds.

“We scrapped. I’ve wrestled him a couple times in the last few years and it’s always good to wrestle him,” Stiles said of Coleman. “He’s fast and he takes good shots, so I just stayed in good position and I tried to attack and force him into bad positions.”

Coleman was disappointed with the loss but quickly put it in perspective.

“I feel like I wrestled well. I just need to touch up a few things,” Coleman said. “I have a lot of time to improve. But my confidence is high and there are goals I’m working for and I need to reach.”

Martinez applauded the day of work that Stiles put in.

“Jake Stiles came in here against two kids who are state-ranked higher than him and he really did well,” Martinez said. “Jake had a tremendous day. (Matt) Ortiz did well, too, beating Smith.”

Ortiz won a 10-2 major decision at 160 over Providence’s Cole Smith, who was a state runner-up last year at 152. Smith is currently ranked second at 160 and Ortiz is ranked fifth.

Mt. Carmel got a pin from Colton Drousias at 106 pounds, in a match he trailed 4-1 on a pair of first-period takedowns from Montini’s Nain Vazquez. Drousias got an escape and then a takedown late in the period and with the score tied 5-5, he took Vazquez down and pinned him. 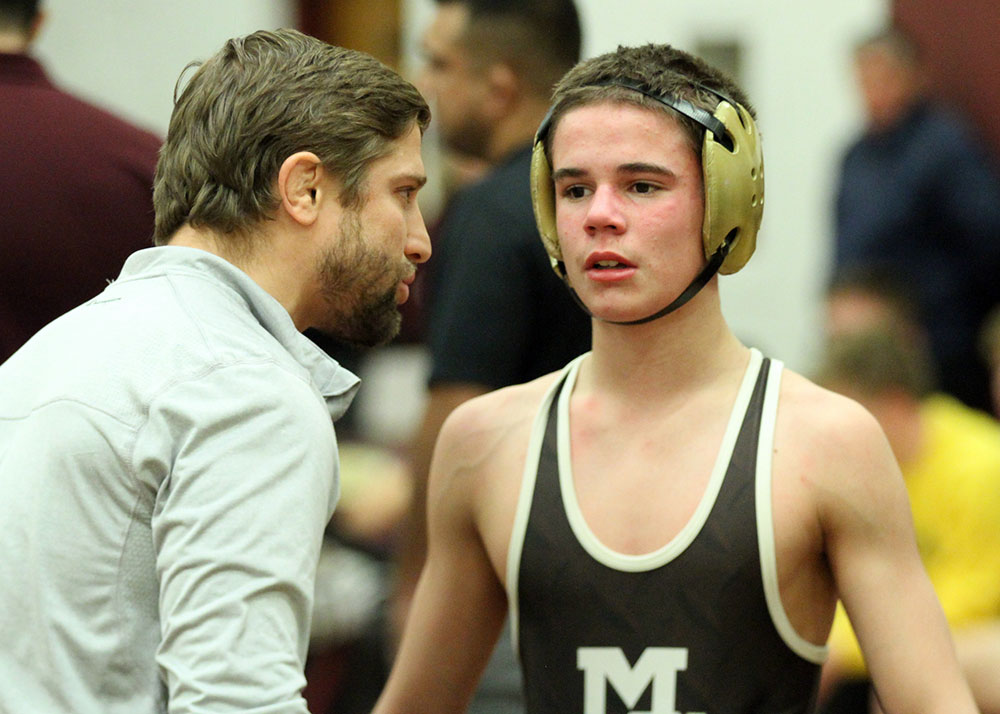 “That’s a big match. That could be a state finals match by the end of the year,” Mt. Carmel coach Alex Tsirtsis said. “(Drousias) doing that was good to see, especially after he fell behind early in the match. It was just a battle and he stayed in there and battled, and found a way to get the win.”

Montini also got a 4-2 decision win from Dylan Ragusin in a spirited match against Caravan freshman Noah Mis at 113. Ragusin led 2-1 on a first period takedown, Mis escaped in the second to tie the score and then rode Ragusin out in the third, sending the match to overtime.

Ragusin scored off a Mis shot early in the overtime for the win, and Tsirtsis hoped his freshman walked away with a lesson learned.

“Noah just needs to get a better mental focus when he gets tired. He’s not used to those big matches yet, so he has to find a way to pull that out,” Tsirtsis said.

At 126, Mt. Carmel’s Connor Gaynor earned an overtime takedown and a 5-3 win over Montini’s Dylan Burnoski, and the Caravan also got a 3-1 decision at 182 on a takedown from Daniel Benoit, with only seconds remaining in his match against Montini’s Trevor Swier. 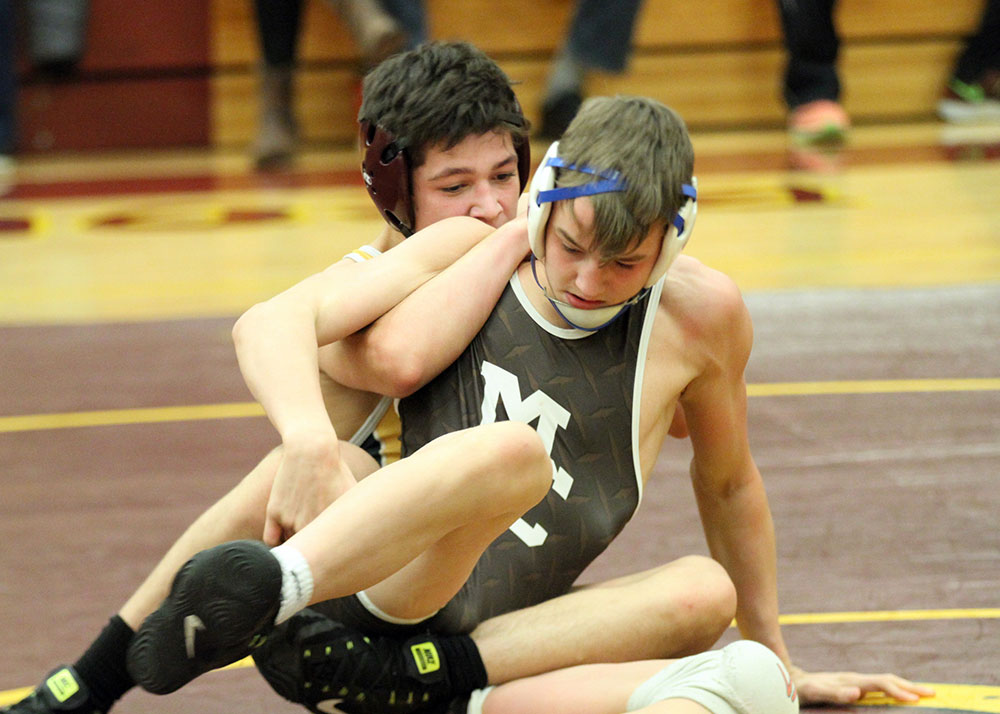 Despite the loss, Tsirtsis was pleased with the effort his side put forth against the top-ranked Broncos.

“For the most part, we competed pretty hard,” Tsirtsis said. “Last week we won our duals on Saturday but I didn’t feel like our guys competed as well as we did today. Our guys fought hard.

“Some of our freshmen and sophomores were wrestling against seniors and it’s hard to compete against those guys. So we’re going to go back in the weight room and get stronger for next week.”

Martinez also tipped his hat to the Caravan.