Like it or not, you cannot argue with the dominance of Montini Catholic.

The Broncos have won 13 dual-team titles and will likely hold that record for quite some time, and even after bumped up to 3A last season, Izzy Martinez’ club still managed to make it into the Elite 8 a year ago.

This season, it didn’t come as a surprise to most that the Broncos would lift the championship trophy at last week’s 62nd Berman Holiday Classic in Palatine, claiming the top prize with room to spare – but what was a surprise was the crowning of Montini as champs at the Cheesehead Invitational over a prestigious field of opponents.

“We do it all for Montini Catholic, and for ourselves – this is a family, and we treat it like that,” said Martinez on his way to Kaukana, Wisconsin, where his lads outscored state rival, Mt. Carmel by 20 twenty points and 28 others to capture the big trophy.

“This school helped get me going on the right path in life, so to be able to come back (here) and put something back into the program that gave me so much makes me feel like I’ve been a very fortunate individual,” continued Martinez.

Martinez would step into the top spot at Montini after serving his apprentice under former head coach, Mike Bukovsky, who collected (8) dual-team crowns during his career before Martinez continued on with that winning tradition in 2011, his first year in charge.

The Broncos have enjoyed a brilliant half decade thus far with its five state titles under Martinez and his staff and nearly (20) individual champions during that same time.

“We hear what others say about us: that we go after kids from other programs, and all that other stuff that’s said about us (and) other private schools when it comes to that subject, but we concentrate only on what we can control – and that’s our training, wrestling, and how we represent the school.”

Two of the Broncos brightest stars, Joey Melendez and Will Lewan are each 100% on-board with the words from their head coach.

“To be honest, I don’t even listen to any of that,” said the junior (Melendez) who was the 113-pound champ at the Cheesehead recently.

“It’s stressed, both in and out of the room, to pay attention to yourself, your teammates, and the team (FIRST) – it has to be that type of commitment in order to be successful, and I can say all of us know coming in that’s the way it’s going to be.”

No. 1 rated Melendez and his parents began to discuss where he would attend high school just before he began the seventh grade.

“I would have gone to Ridgewood, and although it was a good high school, I wanted more, both academically and (with) wrestling – and the reputation at Montini, plus the type of coaching and competition I would receive (there) would outweigh anywhere else.”

“The decision was easy for me, and obviously, it’s paid off for me.”

The reigning state champion says there’s plenty to like about being a part of the Broncos program, aside from the winning.”

“The schedule we have is unbelievable, and I like the fact that opponents and teams always want to beat us because of our reputation – but the best thing is how we’re a family.”

“Izzy always talks about that, and he means it,” begins Melendez.

“You saw us at the Berman. (All) of us kept to ourselves in that small gym, and we would meet there before each round, stretch, eat – we stayed together (and) when one of us had a match, the entire team was out there to cheer them on.”

“I really feel that can be the difference in a tight match.”

“To be a successful tournament team, you have to get all of those extra points along the way, whether it be with bonus points and/or especially (in) wrestle-backs.”

“When your teammates are right there for you, it can inspire you to do some great things. You saw it at the Berman, and that’s what helped pull us through at the Cheesehead.”

“I really believe it brings out the best in a young man, especially in those big events that we go and compete at.”

Melendez, Lewan, and another junior, Real Woods, who would join Melendez and Dylan Ragusin atop the podium at the Cheesehead, are the trio of veterans Martinez has leaned on heavily in the first half of the season, presiding over perhaps the youngest team yet during the Martinez regime.

“This is the place for me, it’s where I wanted to go and be since sixth grade,” admits Lewan, second overall at the Cheesehead behind Austin O’Connor.

The situation of Lewan mirrors that of his teammate Melendez in regard to his eventual destination.

“I was basically going to follow my coach, Tony Marti, wherever he would go,” continued Lewan, an Edison Park resident, which is on the northwest side of Chicago and feeds into Chicago Public League, Taft High School.

“First it looked like Tony would be at Loyola (in Wilmette), then for awhile it was Maine South, which is just next to Edison Park in Park Ridge, but when he landed with Izzy, that was it for me and my parents.’

Barcelona vs. Real Madrid. International powerhouse clubs who are either loved or hated. The same goes for Montini and Oak Park and River Forest.

“I get it – people don’t like us – not everyone, but there’s a lot. But we all come to Montini for the academics and wrestling.”

“The fact that some say we take guys from other programs (or) ALL the really good wrestlers go to Montini actually helps us. It makes the bond between all us even stronger.”

“What Izzy says is true. We’re a family.”

This reporter remembers having a conversation with the Broncos former star (Jimmy Pawelski) following Montini’s loss to Marmion Academy last season in the 3A dual-team quarterfinals, ending the Broncos season and a brilliant career for Pawelski, now at Brown University Ivy League

Visibly shaken and distraught (not) about the actual loss, but instead the realization of it being the final time the three-time state medalist would be wearing a Broncos singlet.

“When you lose to a great team like Marmion at this time of the year, it’s like oh well – but to know that loss meant I wouldn’t be in the room, ever again, with my friends (that’s) going to take a long time to get over.”

Pawleski’s former mates were on hand to see their friend, along with Dylan Duncan compete at the Midlands at Northwestern.

“It was great to see Jimmy and Dylan wrestling and to find out later how happy they are
at college,” said Lewan.

“We’re not deaf to the things that are said about Montini wrestling – but truth be told, guys come here to be a part of our program,” admits Martinez.

“What some don’t realize is what it was like around here when (Mike) Bukovsky took over.”

“We had a pretty good program, but there were a lot of guys who were football players, who wrestled – Mike turned around the culture, and through him, we became a program filled with those who came here to be wrestlers first.”

The 2016-2017 edition of the Broncos enjoys a terrific blend of young and old – the young, with the likes of freshmen, Fidel Mayora and Ragusin, along with sophomore Jake Stiles, give Martinez a head start on the future.

“This team is so much younger compared to our team last season, but they come in here with a load of experience and a desire to work, train and commit themselves to get better, and with the schedule that we keep, they see all of the top teams, which will get them state tournament ready,” says Martinez.

Martinez and his staff will take their collective foot off the pedal down the home stretch to give his men some much needed R + R in advance of the post season – a post season in which Lewan figures can be a memorable one when it’s over.

“This team is built to win this season,” suggests Lewan.

“You saw how good of a tournament team we are at the Berman and Cheesehead, so if we stay healthy and continue to wrestle and compete for each other, as a team, there’s no reason why we can’t be fighting for a state dual-team title.” 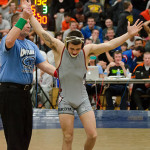 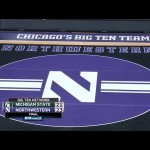