EDWARDSVILLE, Ill. – Illinois wrestling strung together three straight victories to start the dual and four more to close out the dual as the Illini defeated Southern Illinois Edwardsville, 30-10 on Wednesday night (12/7) at the Jon Davis Center. Redshirt juniors Isaiah Martinez (6-0) and Kyle Langenderfer (10-1) bookended the match with a pair of pins to lead the 11th-ranked Illini in their first dual meet of the season.

“We were far from having a good performance as a team, but had some good individual matches,” said Head Coach Jim Heffernan. “It looked like we took a couple steps forward in a few places and a few steps backward in others.”

Beginning at 165 pounds, No. 1 Isaiah Martinez dominated from the beginning, using three takedowns to grab an early 6-2 advantage over Sam Zimmerman in the opening period. After adding four more points for a near fall, Martinez again took Zimmerman to the mat, this time pinning him for the six team points. The 1:14 fall is the second, and fastest, of the season for Martinez.

No. 12 Zac Brunson continued the Illini run, as he defeated Jake Residori by a 4-1 decision at 174 pounds. Brunson (13-2) got on the board with a takedown in the first period to led 2-1 after the opening three minutes. After a scoreless second period, Brunson earned an escape to start the third and added on a point for riding time to seal the victory.

Illinois pushed their lead out to 13-0 over the Cougars when No. 15 Emery Parker won by major decision over Jake Godinez at 184 pounds. Parker (14-1) got to his offense early, using two takedowns and a two-point near-fall to lead 6-1 after three minutes. The Illini redshirt sophomore continued the rout through the remaining two periods, notching a team-high seven takedowns, to win 18-5. Parker has scored bonus points in 11 of his 15 matches this season, tops on the team.

SIU-Edwardsville battled back in the following three bouts, beginning with a 6-1 decision by Jake Tindle over Andre Lee. Like Lee, No. 6 Brooks Black was unable to get to his offense, as Jake McKiernan upset the Illini heavyweight, 6-0, to cut the Illini lead to 13-6. SIU-Edwardsville’s lone ranked grappler, No. 12 Freddie Rodriguez, brought the Cougars within three of the Orange and Blue with a 14-6 major decision of Illini true freshman Travis Piotrowski. Piotrowski (6-4) battled Rodriguez for the first five minutes, taking leads of 2-0 and 4-3, but Rodriguez wore the Illini newcomer down, racking up eight points in the final period to earn the bonus point.

With the Cougars on a 10-0 run, No. 2 Zane Richards got the Orange and Blue back on track with four points at 133 pounds. After surrendering an early takedown to John Muldoon, Richards (8-0) used an escape and a takedown to lead, 3-2, after the opening frame. Following two more points in the second period, the Illini senior piled it on Muldoon in the final two minutes, using two takedowns and a near-fall to finish off a 15-5 major decision. The victory marks Richards’ 90th of his career, moving him within one win of 25th place on Illinois’ all-time list.

The most thrilling match of the night came at 141 pounds where Mousa Jodeh entered the final seconds of the third period trailing Trevor Feagans, 3-1. However, Jodeh (7-6) was able to score on his last shot of the period, to send the match into sudden victory. With Jodeh and Feagans scrambling with less than 30 seconds left in the first overtime period, Jodeh gained control, and wrapped Feagans up for the winning takedown.

“Mousa has been fighting himself a lot early, but found a way to win at the end of the bout,” explained Heffernan.

With two bouts remaining, and the Illini leading 20-10, redshirt sophomore Brock Ervin clinched the match for Illinois with a 9-1 major decision at 149 pounds. Ervin (13-3) scored six straight points to start the bout, and then executed a takedown in the final period to secure the bonus point.

With the victory in hand, Kyle Langenderfer put an exclamation point on the match, picking up his fourth pin of the season with a 1:14 fall of Karsten Van Velsor. The win marked the 10th straight victory for Langenderfer (10-1), and the sixth by major decision or greater.

After picking up their first dual win of the season, the No. 11 Illini will begin preparation for the 51st annual Ken Kraft Midlands tournament, held December 29-30 in Evanston, Illinois. The opening rounds of Midlands will be streamed on BTN Plus, while the championship bouts will be broadcast live on Big Ten Network. 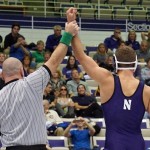