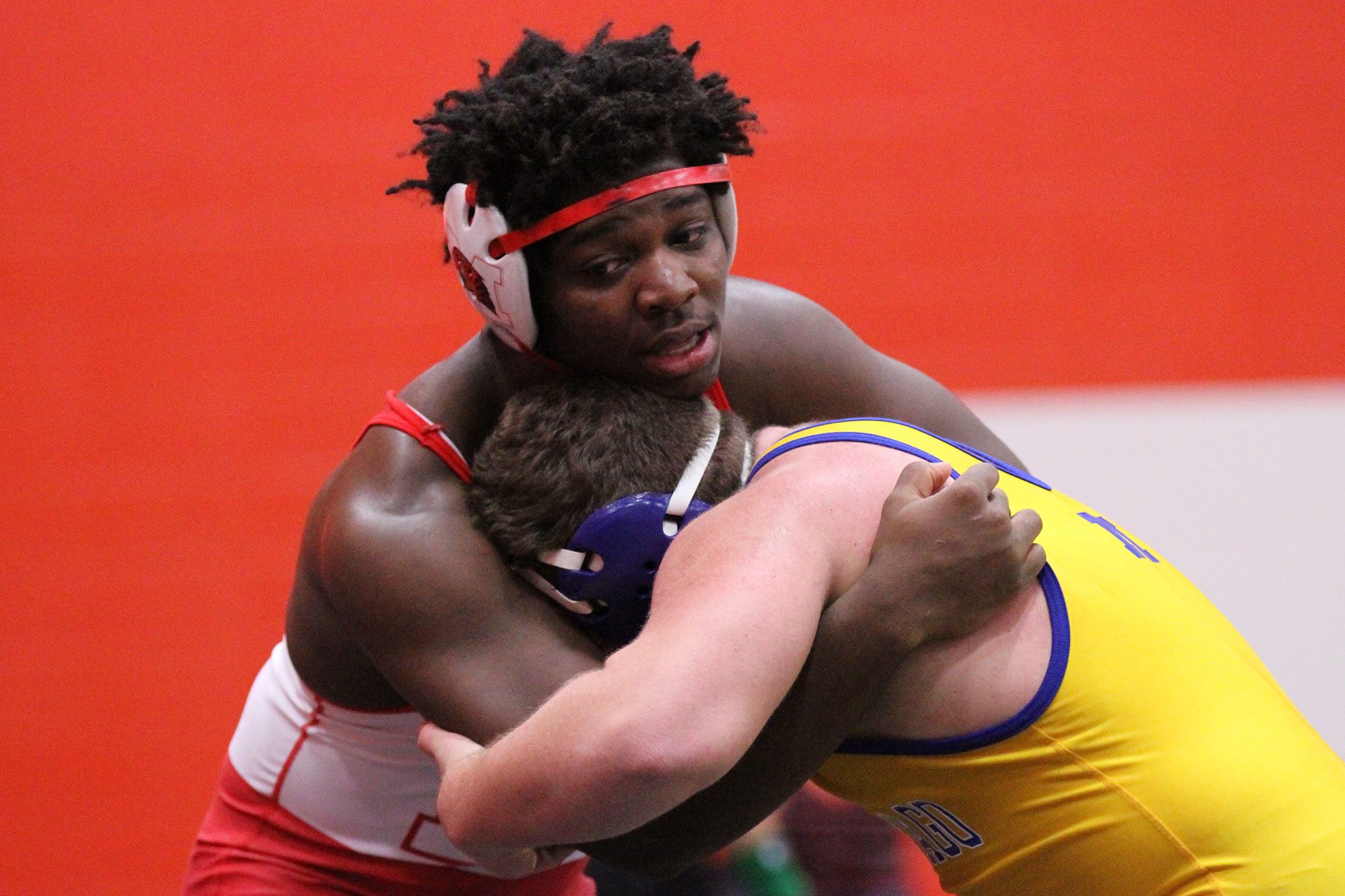 Marist’s Diata Drayton is unbeaten and ranked #1 at 220 pounds in Illinois Matmen’s Go Earn It Wrestling Apparel rankings. Illinois Matmen talked to the Redhawks’ senior for a Q&A session after he improved to 34-0 in winning his third individual East Suburban Catholic Conference tournament title on Jan. 28.

Drayton was a state qualifier at 220 as a sophomore and placed fourth in Illinois last season at 220. He’s considering wrestling for Old Dominion or McKendree University next year.

Illinois Matmen: What’s it like being the top-ranked kid in your weight class?

Drayton: “It feels good to know that everyone is striving to beat me and it makes me work harder, to stay undefeated and win the state title.”

Drayton: “I would say it’s between our 106, Mike Leveille, and our 120, Jacob Dado. Leveille is the littlest guy in the room but fights like he’s the biggest, and Jacob is just so physical.”

Illinois Matmen: What’s it like to wrestle in Champaign? It can tend to mess with a young guy’s head.

Drayton: “I was nervous my sophomore year but I wasn’t nervous my junior year until I got to the semi-finals. The atmosphere can definitely make you nervous. It’s a special tournament because of what’s at stake. Everybody has worked so hard to get there.”

Illinois Matmen: Who has given you your best match this year?

Drayton: “A kid from Missouri that I wrestled at Granite City (Jackson Berck of Francis Howell Central). He was a Missouri state champ and I beat him 3-1 for the title. He was a good scrambler but he didn’t really do much in the match. I took all the offensive shots. So the score was close but it was controlled.”

Illinois Matmen: Who do you enjoy watching wrestle from other high school teams?

Drayton: “I really like watching (Glenbard North’s) Austin Gomez wrestle because of how physical he is, and I watch a lot of freestyle and Greco so I like to watch (former OPRF wrestler) Kamal Bey wrestle, who’s at the Olympic Training Center now.”

Illinois Matmen: How many matches did you get in during the off-season and what’s the benefit of off-season wrestling?

Illinois Matmen: You’re unbeaten so far this year, after losing nine matches last year. Where have you improved?

Drayton: “I’m much more offensive. Last year, I didn’t really take any shots, it was a lot of defensive scoring. You can’t really win that way so I wanted to be more offensive this year. I didn’t shoot last year because I didn’t want to get trapped under the guys I wrestled because I was always a smaller 220. This year I worked on angles and taking shots.”

Illinois Matmen: Mid-January marks the dog days of the high school season, when every wrestler in Illinois is chomping at the bit for the postseason to get here. Any danger of complacency?

Drayton: “No. If you want the end result, you have to work hard every day. I’m taking my time and I like how slow it’s going in January because that’s more time to get better.”

Illinois Matmen: What is the week run-up to the regional like?

Drayton: “It’s about fine-tuning. For me, I have a problem with re-attacking sometimes, so that’s what I work on.”

Illinois Matmen: Who do you credit for turning you into the wrestler you are today?

Drayton: “Harvey Twisters coach (Quintroy Harrell) and (Marist coach Brendan) Heffernan. Heffernan pushes me to work harder at times when I might want to give up. He keeps my head in it. I wanted to quit wrestling when I was younger but (Harrell) pushed me stay with it. I played basketball in eighth grade but when I got to high school I decided to wrestle again. My cousin, Jakada Hull was on the Marist team and my dad said I had to do something in high school. I’m glad I came back to the sport.”

Illinois Matmen: Who pushes you in the practice room?

Drayton: “I work out with (former Illini wrestler) Pat Quirk, one of our new coaches this year. When we wrestle, he doesn’t give me anything. I have to fight for everything and he pushes me hard. I go with another one of our assistant coaches, Matt Leveille, too. He helps me work on top and bottom. In my head, I’m always able to win but I think I scored on coach Quirk once. He shot a double on me and I kind of threw him. There was some mild celebrating on my part but that was the only time I scored on him.”

Illinois Matmen: Do you feel different mentally this year?

Drayton: “Yes. I’ve only been scored on twice this year and both times it was me making mistakes. I don’t want to give up takedowns and I fight for them as much as I can this year. My sophomore year I wrestled (OPRF’s) Allen Stallings in my first match downstate and lost, and that made me want to get better. I didn’t really move much but I was young then and each year I’ve tried to improve. Last year I felt more physical downstate and was more offensive, and this year I’m much more offensive.”

Illinois Matmen: Marist won its eighth straight ESCC team title this year, 170.5-169.5 over Marian Catholic. Did you think another ESCC title was possible this year?

Drayton: “I knew if guys worked hard in the room, we could keep the streak going. We won by one point and like (Heffernan) told us, those are the best ones to win.”

Illinois Matmen: You were on the mat less than two minutes all day in your three matches at the ESCC tournament last week, with three first-period pins. Are you pinning a lot of guys this year?

Drayton: “I have 15 or 20 pins. I always go for the pin but (Heffernan) says I need five takedowns before I can pin him, so I can get some work in on my feet. Then I can go for the pin.”

Illinois Matmen: Was going unbeaten a goal coming into the season?

Drayton: “Yes. I wanted to go undefeated and improve from last year. I also wanted to beat the guys I’ve lost to in the past. I wanted to wrestle Blake Zalapi from Hononegah this year but he was hurt over the summer and hasn’t wrestled yet. He beat me 7-6 my sophomore year.”

Illinois Matmen: I understand that in the past you’ve come into the wrestling season at around 240 pounds, but this year you came in much lighter. How did you make that change?

Drayton: “I played football for three years but I stopped this year so I could wrestle year-round. I did a lot of summer tournaments and that kept my weight in shape. I had to go 215 at one tournament, so that helped me keep my weight down. And I used to eat pizza every day at lunch. Now I eat chicken wraps or salads and stuff like that. That took some getting used to.” 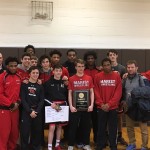