The depth and star power of the Lyons Township roster is headlined by senior Johnny Mologousis, who overwhelmed the competition last weekend at the Rex Whitlach, and in doing so, raised his overall record to 20-0, and his career total to 131.

But it’s so much more than wins, records, trophies and all the other accolades that come with being such a magnificent talent for the University of Illinois-bound senior.

When Mologousis stepped into the LT room four years ago along with Elias Garcia, Zach Villareal and Tyler Zeman, the quartet soon would lay down the foundation for success and excellence, while providing something else which has proved more valuable than the silverware each has collected.

“We became quick friends,” said Mologousis, who knew Zeman since third grade in the Romeoville Kids Club, before joining up with Garcia and Villareal under the charges of head coach, Griff Powell.

“The absolute best thing about being here at LT has been those three guys,” continued Mologousis.

“We kind of formed a brotherhood of sorts – hanging out, in and out of the room, sharing the success we all enjoyed early on, and just making the whole high school experience so cool.”

This fantastic foursome are nearing 475 career victories after the Whitlach, have earned several regular and postseason championship trophies, while giving Powell the type of fuel to power the LT lineup against his high quality conference and weekend schedule.

“We worked with them all throughout our feeder system, so we knew they all had a lot of talent when they arrived here as freshmen,” admits Powell.

“Each of them had the right work ethic from the start, and we knew if they continued to work hard, and continued to develop (that) each of them one day could find themselves on the medal stand.”

Mologousis would do just that last February.

After earning the second regional title of his career, he would win the Batavia sectional crown to book his third visit to Champaign.

Once there, Mologousis would navigate his way through a very difficult 160-pound field and into the final where he would face the brilliant Oak Park and River Forest star, Isaiah White, who after his 11-3 victory would record his third straight state title.

“Going into the final, I knew I would have to come up with a monster effort – he (was), after all, human (on) most days,” joked Mologousis.

“The idea was to execute our plan of attack, keep my hands on him as much as possible, but he was a tremendous opponent, and on some days, it doesn’t quite go the way you hope it will.”

Mologousis’ triumphant march into the stadium during the Grand March on that Saturday evening, much to the surprise of this reporter, was the first ever he witnessed in his lifetime.

“My dad and I would never stay for it because he said when you DO experience the Grand March, it will be when your in it.”

It was well worth the wait for the affable LT star.

“That feeling of walking out from underneath the stadium was amazing, it’s something I will never forget.”

That Mologousis found himself on the Grand March guest list dates back to his final match of the 2015 campaign when Brody Sharp of Yorkville dashed his medal hopes with a pin in the wrestle-backs.

“It was a terrible feeling being eliminated, and from that point on I vowed I wouldn’t feel like that again.”

“I took one week off, and just went all at it with my training, and have not stopped since,” says Mologousis shortly after going on a hard two-mile run less than 24 hours after accepting his championship trophy from the Rex Whitlach.

This remarkable 170-pounder has continued to ply his trade in workmanlike fashion, and when the whistle sounds, he’s an all-action performer, whose pace, expert movement, attacking prowess and clinical finish sets him apart from all others in the field.

“He’s starting to distance himself from the others,” says Powell.

“Johnny is scoring a ton of points, averaging 8-9 take-downs per match, and he’s dominating his opponents in all phases.”

“He’s ranked No. 1 in the state, and I would say that’s pretty accurate.”

Powell has been a major influence for Mologousis, who credits him with taking his game to another level, while also giving him direction in the course he will take next fall.

“Griff watches a lot of film, and/or matches on TV, and when he sees something, he makes notes and brings them back into the room for us to discuss, and potentially add to
our own game plans.”

“He never stops learning and teaching.”

After sorting through a maize of potential college options, including Northwestern, Virginia, and the Air Force Academy, among others, Mologousis chose Illinois, where Powell starred, and captained the 2002 Illini.

“(Griff) and for that matter, our entire coaching staff are unbelievable, and with the help of coach, who helped me sort things out about being a student-athlete in college, I was able to make my decision.”

Mologousis realizes his time on the LaGrange campus is drawing closer to an end, but he says he will enjoy it to the fullest in these final two months.

“I know if I didn’t wrestle (I) probably would be in some kind of ‘combat’ type of sport (my dad played for a farm team in the Pittsburgh Penquins organization, so it’s in my blood.”

“But then I would miss those nights we compete under the spotlight in Vaughan Gym, and all the other really great things about being a part our great program, my teammates and the sport, which has been just awesome for me.” 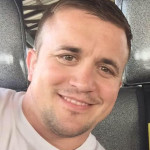 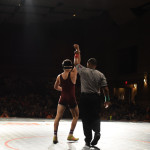