“The guys did great; there was a lot of energy and we were offensive,” said head coach Jim Heffernan. “It was about as complete as we’ve wrestled all year as a team. (Justin) Cardani and Travis (Piotrowski) really set the tone beating their two best guys out of the gate. Travis’ win really got our guys excited.”

Redshirt freshman Justin Cardani got the Illini on the board to start the night with a win over Nicolas Aguilar. Ranked 21st nationally, Cardani recorded a first period takedown to take the initial lead over 17th-ranked Aguilar. Tied in the third period, Cardani was able to escape, and went on to win the match by decision, 3-2. Cardani is now 13-6 on the season, 9-2 in duals, and 6-1 in Big Ten bouts.

Next up in the 133-pound bout was a top-10 matchup between No. 7 Travis Piotrowski and No. 9 Sammy Alvarez. Piotrowski was able to turn Alvarez late in the first period, and secured the win by fall 2:43 into the match. Piotrowski moves to 20-2 on the season, and remains perfect in dual bouts at 11-0.

With a 9-0 lead, Redshirt junior Dylan Duncan looked to keep the momentum going in the 141-pound bout against JoJo Aragona. Duncan tallied three takedowns, an escape and tacked on the riding time point in a dominant, 8-0 major decision shutout. Ranked No. 11 nationally at 141-pounds, Duncan is now 16-6 on the season, including 6-1 in Big Ten bouts.

Redshirt senior Eric Barone was strong defensively in his 157-pound bout against Michael Van Brill. After a scoreless first, Barone was on top in the second. He didn’t allow Van Brill to escape, which would prove to decide the match. With the score tied at 1-1 at the end of the third, Barone was able to win the bout with the riding time point, earned largely through a tough effort on top in the second. Barone’s 2-1 decision over Van Brill put Illinois in front, 16-3, at the intermission.

Redshirt freshman Danny Braunagel was opposed by Brett Donner in the first match after the intermission. Braunagel took the lead initially with a takedown in the first, and added a point for an escape in the second. Donner tied the match at 3-3 late in the third with a takedown, but Braunagel was able to escape in the final seconds, earning a 4-3 decision victory. Ranked 13th nationally, Braunagel is now 18-6 on the season, including 8-3 in dual matchups.

Redshirt senior Joey Gunther added to the Illinois lead with a win in the 174-pound bout over Willie Scott. Gunther turned in a strong defensive effort, and won the match in a 1-0 decision over Scott. Gunther, ranked 14th nationally, moves to 14-5 this season with tonight’s win.

Redshirt freshman Zac Braunagel was up next in a ranked matchup with Billy Janzer. At the end of three periods, the score was tied at 1-1, with No. 14 Braunagel and No. 12 Janzer only having each earned a point with escapes. After a scoreless Sudden Victory-1, the bout went to Tiebreaker-1. Braunagel started on top, and didn’t allow Janzer to escape in his 30 seconds. Switching to bottom, Braunagel was able to escape, and tacked on two more points with a takedown. His strong performance in the tiebreaker period earned him the 4-1 victory. Braunagel’s record now stands at 16-7 this season.

Freshman Luke Luffman closed out the Illinois win with a dominant performance in the heavyweight bout. Ranked 25th nationally, Luffman tallied five takedowns en route to an 11-3 major decision over Alex Esposito. Luffman is now 14-6 in his true-freshman campaign.

Up next No. 15 Illinois will look to extend its win streak, taking on Maryland on Sunday, February 9. The dual is set to begin at 1 p.m. CT, and will be broadcast on BTN +. 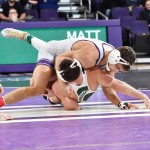 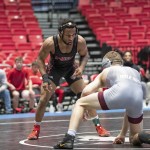