CHAMPAIGN, Ill. – The Fighting Illini wrestling team won five of the first six bouts of the day, jumping out to a 20-3 lead, and held on to defeat No. 19 Rutgers, 23-12, on Sunday afternoon at Huff Hall. Boosted by Isaiah Martinez’s eighth tech fall and Kyle Langenderfer’s upset of No. 17 Jon Van Brill, the Illini move to 7-3 overall, 6-2 in the Big Ten.

“I thought we did okay today, considering we’ve got some guys battling the flu a little bit, Emery Parker being one of them,” said head coach Jim Heffernan. “[Parker] did us a favor by getting himself ready to compete. It’s been kind of a tough week. We’ve got a full week to see the doctor and get ready for the next meet.”

The win marks the 11th straight victory for the Illini inside Huff Hall, a streak that ties the second-best mark in program history. Former head coach Mark Johnson led the Orange and Blue to 11 straight wins from February 8, 2004 to January 20, 2006.

The Orange and Blue led the dual from start to finish, beginning with six points at 125 pounds when Rutgers forfeited the match. The win for No. 18 Travis Piotrowski (14-5) gives him three straight victories in the last week.

After Rutgers’ No. 20 Scott DelVecchio cut the Illinois lead in half with a 3-1 decision against Dylan Duncan at 133 pounds, the Illini rolled off victories in each of the following four matches.

At 141 pounds, redshirt freshman Mike Carr never trailed in his bout against Michael Van Brill, using two takedowns in the opening three minutes to build an early lead. From there, Carr earned a takedown in both the second and third periods, while building one minute of riding time, to earn a 10-4 decision. The win for Carr (13-4) is his ninth in the last 10 matches, including seven straight.

Redshirt sophomore Eric Barone added the second straight decision, as he held off Rutger’s Nick Santos for a 3-2 win at 149 pounds. Earning his second win this weekend, Barone (8-11) got his lone takedown early in the match, wrapping Santos up along the boundary 49 seconds into the contest.

Illinois’ lead grew to 15-3 with a third straight decision at 157 pounds, as redshirt senior Kyle Langenderfer upset No. 17 Jon Van Brill, 8-6. Familiar foes, Langenderfer leveled their collegiate meetings at two-a-piece, including each of the last two meetings, with an explosive reversal that escalated into four back points in the final 30 seconds of the second period.

No. 2 Isaiah Martinez (10-0) finished off the 14-0 run by the Illini with his eighth technical fall this season, including one in each of his last four matches. Wrestling Brett Donner, Martinez scored 16 points in the first period, eight off of near falls, and then ended the match with a takedown to begin the second period. Needing just 3:31 to finish off the tech fall, it’s the second fastest five-point victory of the season.

After Rutgers picked up their second win of the dual at 174 pounds, a 6-2 victory for Joe Grello, Emery Parker stretched the Illini lead back out to 17 points with a 4-3 decision at 184 pounds against Willie Scott. The win for Parker (17-1) is the redshirt junior’s 12th straight of the season.

Rutgers cut the final score down to an 11-point Illinois victory with back-to-back decision wins by Anthony Messner (197 pounds) and Razohnn Gross (heavyweight).

Up next, the Fighting Illini conclude the regular season next Sunday, February 11, at home with a dual again No. 20 Wisconsin. Prior to the 1 p.m. dual, Coach Heffernan and staff will honor graduating seniors Isaiah Martinez, Kyle Langenderfer, Isaac Reinemann and Brock Ervin. The dual will be streamed on BTN Plus and FloWrestling with a subscription to either platform.

The 23-12 victory over No. 19 Rutgers is the 11th straight home win for the Illini, dating back to February 7, 2016 against Northwestern. The 11-match winning streak is the largest under Coach Heffernan and ties a run from February 8, 2004 to January 20, 2006 for second-best in Illini history. The largest streak occurred from February 14, 1998 to January 21, 2001
The win over 19th-ranked Rutgers is the third ranked opponent the Illini have beaten this season. Illinois defeated No. 20 Nebraska on January 5 and No. 24 Purdue on January 21.
The Illini have won four straight Big Ten duals and six of their last seven.
With a 4-3 decision against Willie Scott, redshirt junior Emery Parker won his 12th straight match, a streak that dates back to December 1 at Iowa.
Emery Parker and Isaiah Martinez remain undefeated in duals, Parker 9-0 and Martinez 10-0.
Isaiah Martinez’s 18-3 tech fall of Brett Donner marks the eight this season for the redshirt senior. Martinez has won by tech fall or fall in nine of his ten matches and is outscoring his opponents 186-56 this season.
Martinez’s 3:29 tech fall was the second fastest of the season, second only to a 2:51 tech against Nebraska’s Johnny Blankenship.
With the win, Martinez moves into a tie for 14th place on Illinois’ all-time wins list, joining former Illini B.J. Futrell (2008-13) and Mark Jayne (2002-05) with 108 victories. Jevon Herman (1995-98) ranks 13th all-time with 110 wins.
With the 10-4 decision, Mike Carr has won nine of his last 10 matches dating back to January 5 when he upset No. 9 Chad Red Jr. (Nebraska).
Andre Lee has won three of his last four matches dating back January 14 at Minnesota. 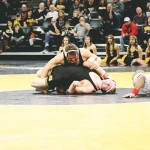 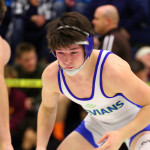