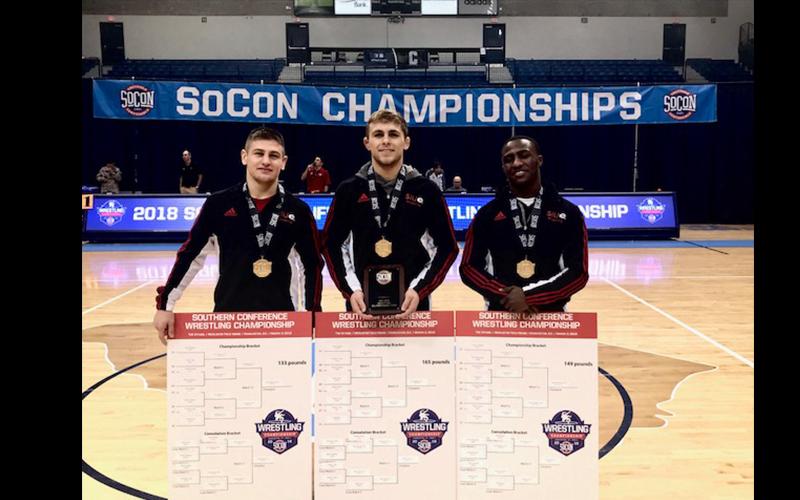 CHARLESTON, S.C. – SIUE’s final appearance Saturday at the Southern Conference Championships certainly was a memorable one.

John Muldoon, Tyshawn Williams and Nate Higgins each won their respective weight classes and earned automatic bids to the NCAA Division I Championships at Quicken Loans Arena in Cleveland, Ohio, March 15-17. As a team, SIUE finished fourth with 62 points. Next season, SIUE officially joins the Mid-American Conference next season.

It was the second straight season that SIUE Head Coach Jeremy Spates and the Cougars have advanced three wrestlers to the national championships. Competing at McAlister Field House, SIUE joined Chattanooga with three champions each and tied both team champion Appalachian State and Chattanooga for the most qualifiers tonight with three.

Muldoon, a 133-pounder from Pearl River, New York, won his weight class with a 5-4 victory over Appalachian State’s Codi Russell 5-4.

The top seed at 133 and the weight class All-Conference selection, won in tense fashion, utilizing 1 minute, and 1 second, of riding time to gain an extra point at the completion of the match. One minute or more triggers the riding time point.

“John wrestled hard on top,” said Spates. “He attacked right away and was able to get to the wrist. He could have taken an easy way and given the escape point, but that ended up being the winning point.”

Muldoon, who started the 2017-18 season at 141 pounds, won two other matches en route to the 133 final. He pinned Davidson’s Zamir Ode in 3:49 and won in sudden victory during the semifinals 10-8 over Campbell’s Nathan Boston.

Williams, of Baltimore, Maryland, leaped in joy after his sudden victory with a 3-1 overtime win over top-seeded Gavin Londoff, of Appalachian State.

“Tyshawn has been working hard all year,” noted Spates. “Ty did what he needed to do in overtime. He went and got the takedown.”

The redshirt sophomore started the tournament as the No. 3 seed and turned in some of the most offense at the tournament. He bested Gardner-Webb’s Joby Armenta 11-4 in the opening round and Campbell’s Zachary Barnes 17-10 in the semifinals.

Higgins didn’t disappoint with a pin over Chattanooga’s Chad Pyke in 4:38. Higgins won his title match with an explosive turn of events in the second period. As Pyke appeared to about to be called for a takedown and potential back points, Higgins quickly turned his opponent and gained the fall.

“I heard the referees calling danger one and danger two,” said Higgins. “Honestly, I thought it was the Chattanooga coaches so I kept wrestling and kept moving around. I kept scrambling and moving and ended up in that position.”

It was the second fall of the tournament for the Millstadt, Illinois, native. He opened the tournament with a 5:17 pin over The Citadel’s William Curtis. In the semifinals, he gained an 11-7 triumph over Gardner-Webb’s Brett Stein.

Spates also honored his seniors competing in their final events. Zac Gentzler placed third after dropping his semifinals match at 125 pounds. Dakota Leach (141) and Karsten Van Velsor (157) each won a match for the Cougars.

“Dakota and Karsten were here before I was and had to deal with the change of coaching staff and not knowing what was coming. They battled hard the whole time. I’m really proud of our seniors,” said Spates. 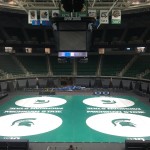 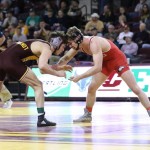