Martell Boone, Sr, Cahokia, 152 – Won Lincoln Invitational last week and tournament OW, and this week won the Murdale Tournament in Carbondale also winning the OW award and defeating 2A #2 Garrick Walker (Glenwood) in the semis and 2A #5 Kolbi Caffey (Carbondale) in the finals. Currently 18-0 on the season.
Michael Donatelli, Sr, Geneva, 160 – Michael is unranked. Won a loaded 160 bracket at his home tournament beating 2A HM Dom Murphy of Brother Rice 18-8 in the quarterfinals and handed 2A #1 Luke Silva of Marian Central his only loss of the season 8-2 in the finals.
Alex Friddle, Jr, Coal City, 120 – Won his 3rd consecutive PIT championship and led Coal City to their back-to-back team championship at the PIT. Only let up 1 point all tournament (fall, fall, 13-1, 5-0).
Maverick McPeek, Sr, Dakota, 220 – Coming off a 1st place finish at the Dvorak where he beat Aric Bohn, the reigning 220 champion from Wisconsin, he won the PIT this weekend beating #4 Keaton Fogler (Olympia) in the semis and #1 Logan Lee (Orion) in the finals, the reigning 220 champion in Illinois.
Dylan Ragusin, So, Montini, 113 – Won Cheesehead beating #1 Noah Surtin of Edwardsville in the featured match of the finals.
Jacob Rundell, So, OPRF, 106 – Won Cheesehead beating Intermat’s #3 wrestler in the country, Cullan Schriever (Mason City), in the finals. Also beat 2A #2 Dean Hamiti (Joliet Catholic) and 3A #4 Colton Drousias (Mt Carmel) at the tourney.
Real Woods, Sr, Montini, 132 – Became the 4th wrestler ever to win 4 Cheeshead titles and was named tournament OW with 2 falls, 3 techs, and a major. 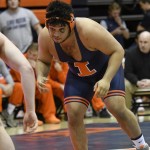