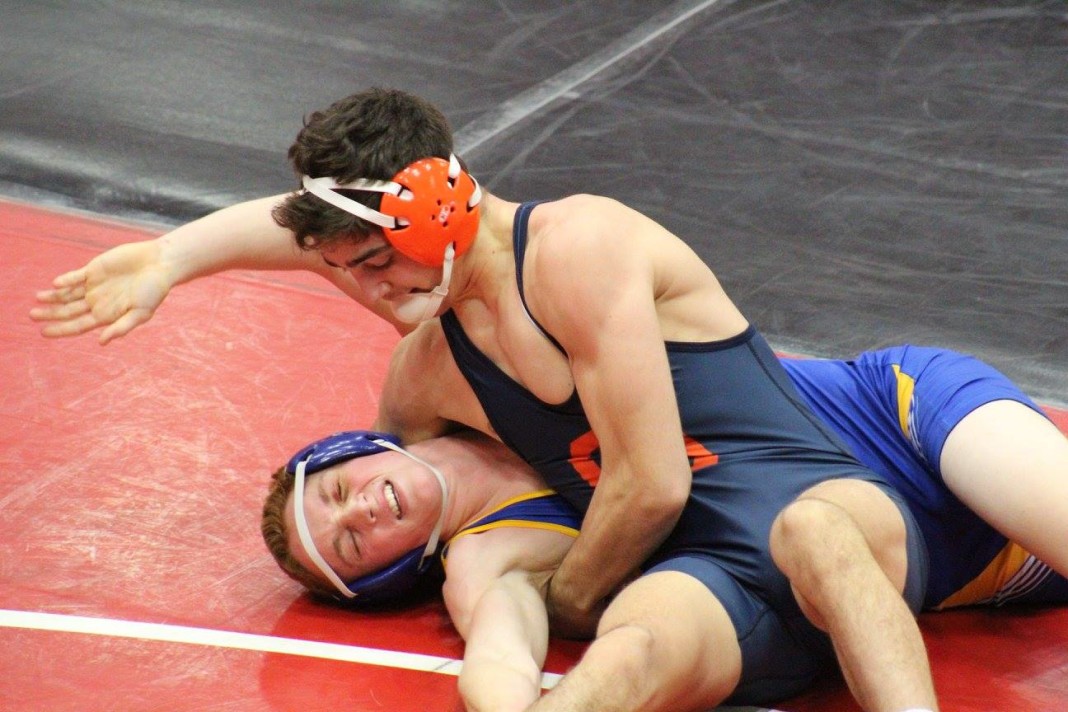 The names are familiar for Oak Park-River Forest, but the faces may not be.

The current Huskies roster, which features Jake Rundell, Josh Ogunsanya, Torry Early and Daemyen Middlebrooks among others, echoes those of years past.

All four are following the path of their older brothers, who set the bar high.

Larry Early and Matt Rundell each won Class 3A championships, and they combined for seven state medals. P.J. Ogunsanya and Christopher Middlebrooks were both state qualifiers as seniors last season.

There’s no escaping those legacies, but Oak Park’s next generation is hard at work building its own.

Jake Rundell and Josh Ogunsanya were among the Huskies’ three champs during Saturday’s Rex Whitlatch Invitational at Hinsdale Central, while Torry Early and Daemyen Middlebrooks each finished second. Oak Park won the 24-team event 266-5-170.5 over runner-up DeKalb. Providence (145.5), Sandburg (143) and Minooka (140) filled out the top five.

Rundell rolled through the 106-pound bracket with three pins and a technical fall, living up to his No. 1 ranking in 3A and pushing his record to 15-1.

“My coaches have really helped me develop my style and … it’s all about just sticking to that,” the sophomore said.

And following his brother’s lead: “He helped me a lot,” Jake Rundell said. “He was my main influencer.”

Josh Ogunsanya (14-0), also a sophomore, survived two tough matches to win the 120 title. He edged Brother Rice’s Hassan Johnson 2-1 in overtime in the semifinals before getting an escape as time ran out to beat Lemont’s Kyle Shickel in the title bout.

Schickel had tied the score 3-3 on a takedown with four seconds left. But Ogunsanya wasn’t thinking overtime, even with so little time left.

“I thought, it didn’t matter what the time is, I could get out if I put enough effort into it,” he said.

Like Jake Rundell, Josh Ogunsanya uses his older brother as a frequent sounding board.

“I look up to him a lot,” the younger Ogunsanya said. “Just conversing with him can be beneficial.”

And the expectations that come with the relationship?

Oak Park coach Paul Collins understands that and does his best to relieve it.

“It’s a cliche … but no one’s expecting Torry Early to do what Larry Early did or Josh Ogunsanya (to do what P.J. did),” Collins said. “They’re just completely different entities. …

“It’s a tough thing for them in the back of their minds, … But we’re trying to guide them and get them to truly believe the fact that our only expectation for them is to push themselves on a daily basis.”

There are more family ties for Oak Park too. Brothers Eddie and Nico Bolivar man back-to-back weights this season, and both were finalists on Saturday. Eddie (14-1) moved to 14-1 with a 6-4 decision over Sandburg’s Pat Nolan in the 132 championship, while Nico fell 11-4 to DeKalb’s top-ranked Fabian Lopez (16-1) in the 126 final.

Ambrose saw the tournament as a reset for his season.

“They said there were 23 losses out of 28 finalists and I accumulated four of those,” he said. “I was a little upset about that. … (This) got my name back to where it should be.”

Heading into the final overtime period, Villalobos said, “I was just thinking I had to get up right away, get my escape. It was hard, he was a big, strong guy. … But I had to do it for the win.”