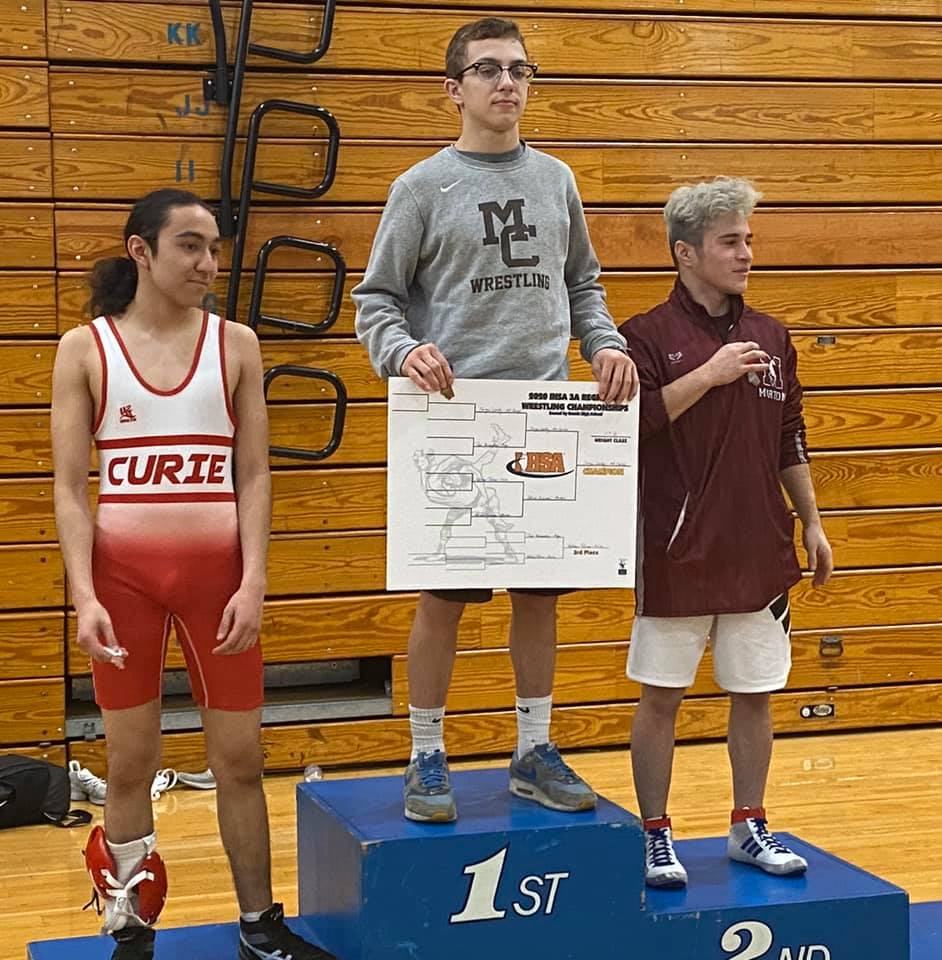 After the 113-pound freshman at Mt. Carmel lost to Marmion’s Diego Sotelo in the CCL Tournament final, Lemley hoped to get a second chance in Saturday’s 113-pound title match of the Class 3A Hinsdale Central Sectional.

“The first loss stung because I believed I could’ve beaten him from the very beginning,” Lemley said. “After the first match, I knew his style and how I could win, and throughout the whole sectional that was the match I was looking forward to.”

Lemley made the most of his second chance.

With a sectional title on the line, Lemley – ranked No. 2 in the GO EARN IT 3A 113-pound rankings – topped Sotelo – ranked No. 1 in the most-recent GO EARN IT Power Rankings – by a thrilling 4-3 decision.

After his victory and his performance at the sectional, Lemley was voted as this week’s FCA Wrestler of the Week.

“I think going into the season, there were some question marks,” Mt. Carmel coach Alex Tsirtsis said. “We knew he’d be able to compete, but to actually be in a position to win, we weren’t sure. But after a few weeks of competition we knew he could do it and he’s only gone up from there. He’s had a great season.”

A multi-time youth state champion in Indiana, Lemley has proven he belongs at the high school level all season long.

With only three losses this season – including just one to an in-state opponent in Sotelo – Lemley advanced to the blood round at The Ironman, won a Dvorak title and a Cheesehead title before he fell to Sotelo by 2-1 tiebreaker in the finals of the CCL. Sotelo scored the go-ahead point when Lemley was called for locked hands.

“At the CCL, I didn’t really get into my shots well,” Lemley said. “I had just one slide-by, and I was kind of disappointed that I didn’t score more. The little things really cost me the match.”

The second time, however, things went in Lemley’s favor.

Lemley enters this weekend’s IHSA State Tournament with a 39-3 record and is aiming to win his first state title, while Mt. Carmel is shooting to win back-to-back 3A 113-pound titles as Colton Drousias won last year.

“If I were able to win, it’d be pretty special,” Lemley said. “My brother was never able to win a state title even though he came close, so I really want to bring one to the family.”

While he still has a lot of work to do, Lemley would have to beat the weight’s best in order to claim the title as he’d match up with Montini sophomore and No. 3-ranked Nick Gonzalez – who Lemley beat earlier this season – in the semifinals and could possibly have the rubber match against Sotelo in the state title match.

“It’d be really nice to get that match and win it,” Lemley said.

“I think (a state title) would set the tone for the rest of his career,” Tsirtsis said. “We knew he could compete coming into this season, but now he’s put himself in a position to actually do it. He just has to wrestle like he has all year.”

Lemley was one of five finalists for this week’s FCA Wrestler of the Week award as he finished with 31 percent of the vote and edged Illini Bluffs’ Cam Clark by just 33 votes.

“I was on the train back home earlier this week and my dad called me and asked if I knew anything about being nominated,” Lemley said. “I had no idea about it, but it was pretty cool. I definitely voted for myself, shared it on social media and my parents shared the link with a lot of their friends and family.”