Home High School No Izzy, No Problem: Montini cruises to eighth title in the last...

Team photos courtesy of the IHSA

No Izzy, no problem for the Montini wrestling team.

Competing in Saturday’s IHSA Class 3A Dual Team State Tournament in Bloomington without legendary head coach Israel Martinez – who didn’t coach while an investigation in ongoing – the Broncos had little problems.

A week after Montini had 14 wrestlers qualify for individual state, 11 place winners and five state champions, Class 3A’s No. 1-ranked team in the GO EARNT IT rankings finished off its magical season in dominant fashion, capped with an impressive 37-9 title-match victory over No. 2 Mt. Carmel.

“We’re always competitors, and we always want to win,” said Montini 126-pound senior Dylan Ragusin, who wrestled up at 132. “No matter what is happening, we find a way to win.”

It was the third straight 3A state title for the Broncos and eighth in the last 10 years. Montini also completed a perfect 24-0 dual season.

“This team is pretty special among all the groups,” said Montini assistant coach Paul Faris, who was the acting head coach in Martinez’s absence. “These guys have been on a mission from the first practice to all the different tournaments to all the quality competition we’ve faced this season. This may be one of the best teams ever in Illinois. We’re so proud of them.”

After Montini topped Lockport 59-9 in the quarterfinals and Barrington 70-4 in the semifinals, the Broncos cruised past Mt. Carmel, which it beat 32-26 on Dec. 7.

In all, Montini beat it’s three opponents by a combined score of 166-22.

“We expected to go out and be dominant the entire time,” Montini 145-pound senior Fidel Mayora said. “We never want to give up an inch.”

The Broncos did just that.

In the No. 1 vs. No. 2 showdown, Montini won the first six matches to build a 20-0 lead and won 11 of the 14 bouts against Mt. Carmel, which captured its first trophy under fourth-year coach Alex Tsirtsis.

“This is a stepping stone for us,” Tsirtsis said. “We haven’t gotten out of the sectional the last three years, so none of our kids have this experience. Montini wrestled tough and won all the close matchups that they needed to, and we did the opposite.”

Faris, who was coaching in his last match, said he was unable to comment on why Martinez was not coaching and said that any official comment would need to come from Montini’s administration.

“I can’t talk about it, but I’m going to be optimistic about everything,” Faris said. “But I’ll tell you that these kids didn’t get diverted. They focused on the project at hand and only focused on what they set out to do.”

In the Class 3A third-place match, Barrington beat Carl Sandburg 40-28. 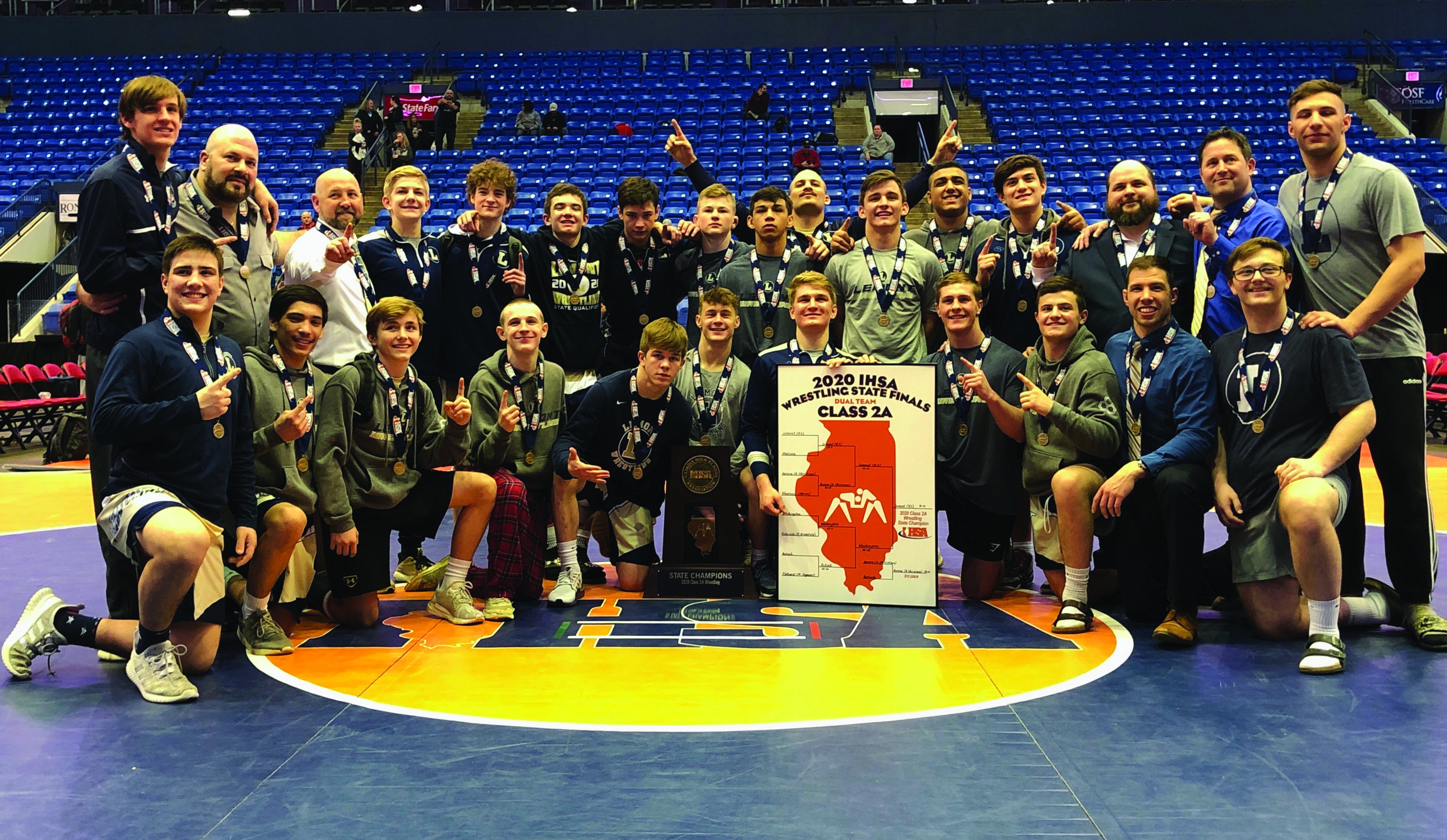 Washington’s title streak is over.

A week after Lemont made everyone take notice at individual state, the Indians capped their history-making season as they defeated the four-time defending Class 2A state champion 30-26 to win Lemont’s first dual team state title in school history.

“Washington has been so good for so long, and we beat a great program,” Lemont coach John St. Clair said. “If you want to be the best, you’ve got to beat the best. They kicked our tails last year, but we got it done this year, and it was awesome.”

In the title match, Lemont led from start to finish as it built leads of 9-0 and 21-3 before Washington came roaring back to cut the deficit to 21-17.

However, Lemont freshman AJ Heeg secured the state-title winning decision to send the team and Indian crowd into pandemonium.

“We knew that this year was going to be something special,” St. Clair said, “and it played out exactly how we hoped.”

Dakota is back on top.

Four years since their last title, the Indians topped Coal City 40-19 to win their first dual team title since 2016.

“These guys were really prepared, and I didn’t know if that was going to be the case,” Dakota coach Peter Alber said. “I was nervous all day long and I wasn’t confident that, ‘We’re just going to go out there and hammer,’ but they wanted it bad enough. They did a great job.”

After Dakota topped Tremont 54-13 in the quarterfinals and Tolono Unity 35-27 in the semifinals, Dakota pulled away late against the Coalers to win Alber’s sixth career state title and first since the Indians won four straight from 2013-16.

Dakota even had state champion hats premade that it wore immediately after the victory.

“I think this is probably the weakest team that I’ve ever come down here with, but this team has such big hearts,” Alber said. “We had only one state champ and a second-place finisher but, usually when we come down, we have multiple state champions. They really wrestled their hearts out.”

It was the second straight season that Coal City finished as a state runner-up as it placed second in 2A last year. The Coalers also lost to Dakota in the 2016 1A state title match. 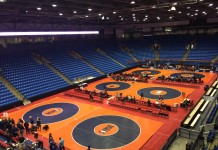