BYDGOSZCZ, Poland. – Illinois redshirt senior wrestler wrapped up his first career world competition with a fifth place finish at Under-23 World Championships Bydgoszcz, Poland. Finishing with a 2-2 record on the day, Martinez battled back in repechage to reach the bronze-medal match where he fell to 2017 U23 European champion and Golden Grand Prix runner-up Avtandil Kentchadze of Georgia.

Drawing the 2015 Junior World champion and 2017 Russian Championships silver medalist Nabiev in the first round on Sunday morning, Martinez fell behind early 4-0 and trailed 6-2 midway through the second period. Martinez battled back to within one, 6-5, by earning a takedown with 10 seconds remaining but was unable to complete the comeback. Nabiev went on to win the 74kg U23 gold medal on Sunday afternoon.

With the loss, Martinez waited to see if Nabiev could advance to the finals and put Martinez back in repechage. After giving up five points to Martinez, the Russian 74-kilogram grappler only allowed four points combined over his next three matches, outscoring his opponents 23-4, and advanced to the finals, putting Martinez in repechage.

Repechage, a form of consolation brackets, is used to reward those who lost to the eventual bracket finalists. With Badzhi Nabiev (Russia) and Akhsarbeck Gulaev (Slovakia) reaching the 74kg final, each of their opponents were brought back into repechage in a dual-bracket format. With Martinez losing in the first round, he began repechage competition against Nabiev’s second round opponent, Andrius Mazeika (Lithuania), with Nabiev’s quarterfinal and semifinal opponents waiting in the repechage semifinals and finals.

Opening repechage against Mazieka, Martinez cruised to an easy 13-2 tech fall. A pair of single-leg takedowns gave the United States’ wrestler an early 4-0 advantage before Mazieka responded by cutting the lead in half with a takedown. From there, Martinez would finish the match on a 9-0 run with four more takedowns.

Martinez reached the bronze-medal match with a second-round shutout of Yerkebulan Tileu (Kazakhstan), 11-0. Three takedowns in the first minute spearheaded the 11-point frame. The Illini redshirt senior piled on two more takedowns to close out the tech fall.

In the bronze medal match, Kentchadze (Georgia) got to his offense early and often, earning a first-period tech fall with a score of 11-0.

Martinez and the rest of the Illinois wrestling team return to action on Friday, December 1, as the Illini open Big Ten action on the road at No. 7 Iowa at 7 p.m. The match can be streamed live through BTN Plus and FloWrestling. 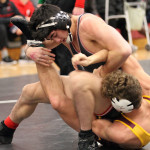