CHAMPAIGN, ILL.— On a night when Coach Heffernan and staff honored the 2015-2016 senior class, it was one of its own that clinched the Senior Night victory for the Fighting Illini. After an upset victory for the visiting Golden Gophers at 174 pounds, the match stood tied entering the final bout. Jeff Koepke improved to 18-5 on the season with a dual-clinching 8-4 decision over Chris Pfarr of Minnesota. The victory moves Illinois to 13-5 on the season, while Minnesota drops to 9-8.

“He’s a senior, it’s a great way for him to go out on Senior Night, last home dual meet,” said Head Coach Jim Heffernan. “Koepke’s a senior, he’s been through a lot of this stuff before. I was pretty confident he would keep his composure and wrestle well.”

A match that seesawed back and forth to the end, it was Minnesota who struck first. Beginning the match at 197 pounds, #3 Brett Pfarr defeated Emory Parker. However, Parker gave an admirable effort against the third-ranked grappler. Trailing 5-1 after period one, and 7-3 after period two, Parker responded with an escape and takedown to cut it to 7-6. Unfortunately for Parker, Pfarr added one more takedown to seal a 10-5 decision.

The Gophers increased their margin to the largest of the night with an 8-0 shutout by #10 Michael Kroells over #20 Brooks Black. The four-point major decision pushed the Illini deficit out to seven points.

Having battled through the buzz saw that is the Big Ten as a true freshman, Francis Edelen was in search for his first career Big Ten victory. After Skyler Perry of Minnesota opened with a takedown, Edelen would shut Perry for the remaining six minutes. Edelen earned am escape in period one, a stalling point in period two, and another escape point in period three to edge Perry, 3-2. Head Coach Jim Heffernan expressed how proud he was of how the freshman has continued to fight throughout the year.

“Francis [Edelen] has really hung in there; he’s in a tough spot,” said Heffernan. “He’s wrestled a lot of good guys lately, so the fact that he was able to hang in there, and find a way to win, I was really proud of him. We got an upset win early, and we gave up one late, so Francis won the meet for us essentially.”

Returning after battling illness last weekend, #2 Zane Richards took control of his bout with Sam Brancale early and often. Richards used two takedowns in the opening frame, and then piled on two four-point near falls in the second period. Richards finalized his 21st victory of the season in the final period with a takedown to win 17-2. The win solidified a perfect regular season for the red-shirt junior from Carbondale, Illinois.

After Illinois stormed back to take the lead 8-7 through four matches, Minnesota responded with victories in the next two weight classes to reclaim the advantage. First, #9 Tommy Thorn used two first-period takedowns to jump out 4-1 over the Illini freshman, and then holding on for a 6-2 final tally. At 149, #14 Jake Short and Illinois’ Kyle Langenderfer fought for seven straight minutes, each taking turns venting frustration throughout. Although Langenderfer stayed within reach for most of the seven minutes, Short held on for an 8-3 decision.

Although trailing 13-8, the Illini entered the final four matches of the dual confident after only allowing one bonus point and stealing the three points at 125 pounds.

#2 Isaiah Martinez brought the Fighting Illini grapplers back to within a point of Minnesota by putting on an exhibition of strength against Gopher Brandon Kingsley. Martinez used six takedowns and a reversal, while only allowing escape points, to take a 15-6 major decision victory.

Wrestling for the final time at Huff Hall, senior #4 Steven Rodrigues capped his career on Huff Hall’s mat with his seventh Big Ten victory of the season. Much like Martinez in the match prior, Rodrigues wore out his opponent Brandon Krone with 10 takedowns, six of which came in the final period, in route to a 21-8 major decision that put the Illini ahead 16-13.

The upset of the dual came at 174 pounds, with Minnesota’s Nicholas Wanzek defeating #2 Zac Brunson in a highly contested seven-minute tussle. After an early takedown by Brunson, Wanzek reversed Brunson and got a shoulder on the mat for a surprising four-point near fall. Now trailing 6-2, Brunson got an escape and takedown to move within one after the first three minutes. After outscoring Wanzek 3-2 in the second frame, Brunson and Wanzek entered the final two minutes knotted at eight. Brunson got an escape to start the final period, but not before Wanzek moved his riding time past the one-minute threshold. Now needing a takedown to win the match, Brunson was unable to get back to his offense. Wanzek used one final takedown, plus the added riding time point, to close out a 13-10 decision to tie the dual.

The Fighting Illini looked to senior Jeff Koepke to cap his senior night with a dual-clinching victory. The senior maintained his poise following the upset of Brunson, using two takedowns in period one to forge ahead 4-2. After a quiet second period, Koepke finished off Chris Pfarr of Minnesota to win the match by a tally of 8-4. The win improves Koepke to 18-5 on the season, and gave #12 Illinois a 19-16 win over #16 Minnesota.

“I really wanted to go out there and give my best match for the fans that have been supporting me all these years,” said Koepke. I’ve got to get to my attacks earlier, and I did that [tonight]. I got the first takedown for the first time in awhile. I saw Zac [Brunson] kind of struggle to get position, so I turned the pace down a little bit. I could have gone for a higher score, but I kept it safe and got the win.”

Following their back-to-back wins to end the regular season, Coach Heffernan says that the team will use the next three weeks to rest up and tweak some things heading into Big Ten Championships in Iowa City on March 5 & 6.

“We’ll give them some time off to be regular college students, get organized, because the next three weeks will go by fast,” said Heffernan. “We’ll do a lot of good training, clean things up, and spend some time getting healthy heading into Big Ten Championships.” 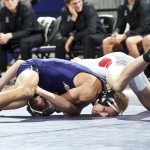 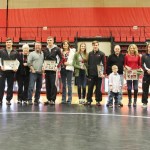