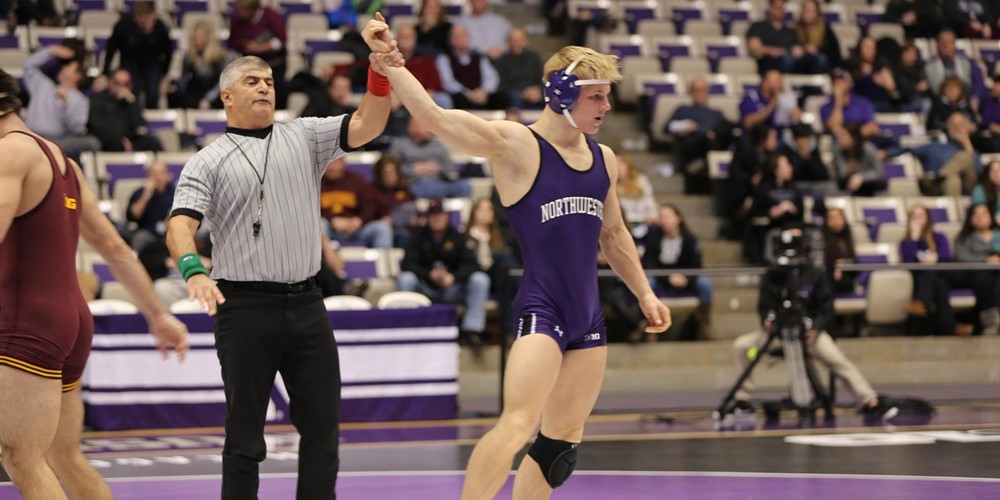 EVANSTON, Ill. – Northwestern put together its best performance of the 2015-16 dual season but came up just short of an upset over No. 17 Minnesota, falling 22-20 to the Gophers Friday night at Welsh-Ryan Arena.

“I was really satisfied with the overall effort tonight,” interim head coach Matt Storniolo said. “I feel like this was the best dual meet competition we have put together as a team.

“The result wasn’t what we wanted, but the guys are doing the right things, and if they keep wrestling matches the way they did tonight, the results are going to change.”

Four Wildcats were winners with three picking up bonus points. True freshman Luke Norland and redshirt freshman Regis Durbin each won by fall in the second half of the dual.

Norland came right out of intermission and pinned Brad Dolezal in the second period to give Northwestern a 14-12 lead. The freshman had lost four straight matches by decision before erasing his fortunes in a big way.

“It feels good,” Norland said. “It is rewarding. Every week, you put in a lot of work to win, so it’s frustrating when you aren’t. You have to stay positive and make every minute count, so that’s what I tried to do.”

Garrison White started the night off with a 5-4 win at 125 lbs. over Steve Polakowski with the deciding point coming via riding time. White erased a six-match skid and picked up his 10th win of the season in the process.

Dominick Malone followed him in short order at 133 lbs. and won by tech fall over Ben Morgan in the first period. Malone used 12 nearfall points to build up a 16-1 lead, ending the match in just minutes.

Malone has been nothing short of dominant this season as 13 of his team-leading 18 wins have come by bonus point decisions. Friday’s win marked his fifth by tech fall.

Three straight Minnesota wins, including one by Jake Short at 149 lbs., who beat Jason Tsirtsis with a takedown and two nearfall points with just seconds remaining in the match, gave the Gophers a 12-8 lead at the break.

The lead changed hands four times in the last five bouts with Durbin’s first period pin during a scramble at 184 lbs. giving the Wildcats a five point advantage. The visiting Gophers were able to muster wins in the final two bouts to claim the two-point victory.

Chicago’s Big Ten Team next heads downstate for a dual with No. 13 Illinois on Sunday afternoon at 2 p.m. 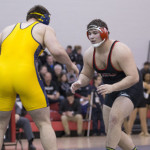