“Although we came away with a win, it was a very frustrating night,” explained Head Coach Jim Heffernan. “We got caught on our back and pinned twice in the third period in matches that we were leading. That can’t happen at this point in the season. We need to get better, make better decisions and finish matches.”

Zane Richards (18-2) reached the century mark in career wins with a 16-6 major decision against Jason Ipsarides to get the Illini on the scoreboard in the second match of the dual.

With the Illini trailiing 6-0 after a pin by Northwestern’s Anthony Rubinetti, Richards went to work on Ipsarides to the tune of three takedowns in each of the first two periods. The Illini senior finished off the victory with an escape and a point for riding time in the third period.

Richards becomes the 23rd Illini wrestler in school history to reach 100 wins in his career and currently ranks 10th in Illinois history in win percentage (.820). The Illini seniors’ next win will tie him with current volunteer assistant, and two-time NCAA champion, Jesse Delgado for 22nd on the all-time wins list.

After the Illini and Wildcats traded decisions in the next two bouts, No. 20 Eric Barone (7-5) winning 7-5 at 149 pounds, the Illini went on an 18-0 run over the next four bouts to surge ahead of the Wildcats.

No. 12 Kyle Langenderfer gave the Illini their first lead of the match with his seventh straight victory, a 20-6 major decision against Northwestern’s Ben Sullivan. After three takedowns in the first period, Langenderfer scored 12 points in the following two minutes, highlighted by four back points to end the period, to put the match out of reach. Sullivan was able to fight off another takedown from the Illini redshirt junior, keeping Langenderfer from earning the technical fall.

Leading 11-9 coming out of the intermission, No. 1 Isaiah Martinez (165) and No. 12 Zac Brunson (174) overwhelmed their counterparts to double the Illinois lead.

Martinez notched his 20th win of the season with a pin with 51 seconds remaining in the first period. Prior to getting Northwestern’s Anthony Perone on his back, Martinez unloaded six takedowns on the Wildcat in the first two minutes of action. Following the sixth takedown, the Illini redshirt junior turned Perone for his fifth fall of the season.

Martinez (20-0) has now scored bonus points in 17 of his 20 matches this season, tops on the team. The five pins rank second on the team.

Nearly as fast as Martinez, Zac Brunson (23-5) needed just two minutes, 27 seconds to dispatch of Braxton Cody by technical fall, 16-0, at 174 pounds. After an early takedown, Brunson turned him four times, earning two back points the first time and four points on each of the three subsequent times.

The 14 near fall points for Brunson is the most by an Illini in a match this season, surpassing Richards’ 12 against Ted Rico last Sunday at Arizona State.

Emery Parker finished off the 18-0 run by the Illini, and clinched the dual victory, with a 5-3 comeback victory over Mitch Sliga at 184 pounds.

Sliga jumped out to a 3-0 lead after a first-period takedown, followed by an escape to start period two. Parker cut the lead to 3-2 after a penalty point for stalling in the second period and an escape to start the third period. Back in neutral, Parker and Sliga got into a scramble with less than a minute to go, but Parker was able to earn the go-ahead takedown with just 37 seconds left on the clock. With Sliga fighting to get a match-tying escape, Parker rode out the Wildcat to earn the riding time point and seal the victory.

After Jacob Berkowitz gave Northwestern their second pin of the night at 197 pounds, No. 15 Brooks Black gave the Illini their seventh and final victory of the night with a 4-2 decision against Conan Jennings at heavyweight.

Riding their five-match win streak, the Illini return home to host Purdue on Sunday, February 5 at 1 p.m. Sunday’s dual will be ‘Takedown Cancer’ day, as the Illini honor those who have battled cancer. Illinois wrestlers will toss out pink Illinois t-shirts prior to the match.

Illini Notes:
Illinois has won five consecutive matches dating back to their 34-6 victory against No. 13 Michigan on January 20.
Zane Richards’ 16-6 victory marks the 100th of his career, becoming the 23rd wrestler in Illinois history to reach the century mark.
Richards is one win away from tying current Illini assistant, and two-time NCAA champion, Jesse Delgado (101) for 22nd on Illinois’ all-time list.
Isaiah Martinez improves to a perfect 20-0 on the season, notching his fifth fall of the season and 17th bonus-point victory
Zac Brunson’s 16-0 technical fall moves him into a tie for 24th place on Illinois’ all-time wins list, tying Carl Perry with 98 career victories.
Brunson’s 14 back points is the most by an Illini in a match this season
Kyle Langenderfer notched his seventh straight victory to improve to 19-4 on the season. During his seven-match winning streak, Langenderfer has scored 26 team points for the Illini
Brunson and Parker both notched their team-leading 23rd win of the season tonight 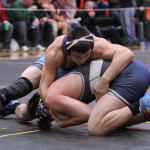