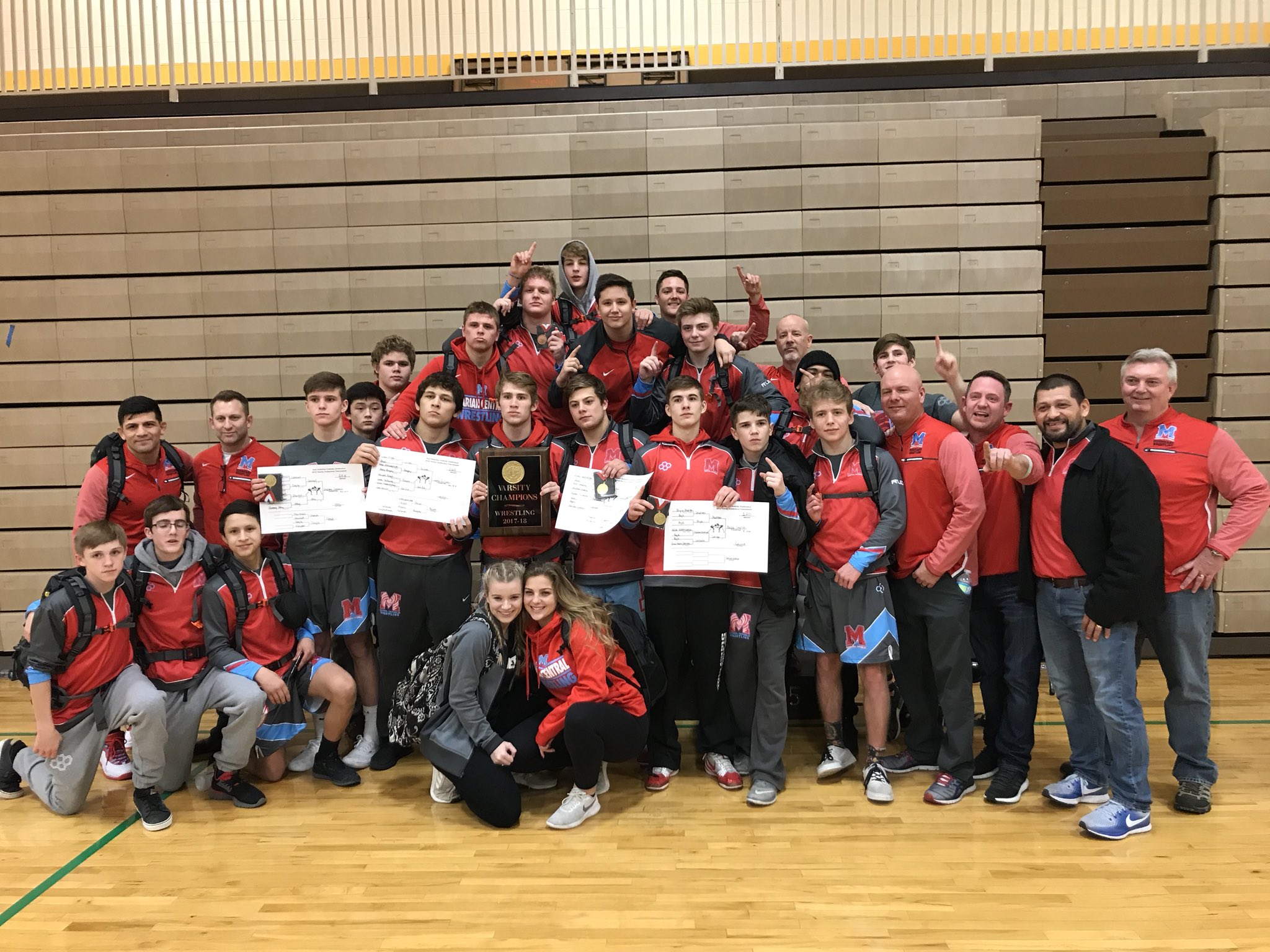 A quick glance in the history section of the East Suburban Catholic Conference (ESCC) wrestling archives is almost all in red ink – in reference to the 25 team titles the Marist Redhawks have won during the 27 year the conference has existed.

There will now be a place for Marian Central Catholic on that list after the Hurricanes slowly pulled away from its league rivals to lift its first trophy since joining the ESCC in 2015, and when-then, freshmen, Anthony Randazzo would compete in his first conference tourney at 126 pounds.

“This has all kind of been building for us from the very start of the year when we thought we had a legit chance to win the conference championship (but) as the year went on, I really believe all of us knew we could win (here) and then go on to do the same at regionals,” said Randazzo, who was one of 11 overall medals the Hurricanes won, to outscore runner-up Notre Dame 186-118, and upstart Nazareth Academy, who finished third overall (102) despite bringing just seven men to the table last Friday at host Carmel Catholic in Mundelein.

“I was never really worried about our slow start (but) what kept going through my head was: did I work the guys too hard this past week, or was it just a case of nerves throughout the guys (there) had to be something causing our rather poor first round of wrestling,” admitted head coach, David Silva.

Silva and his staff had to wince at times at a handful of so-so performances and lost points helped keep the rest of the field close, however, when his club fired back with an impressive effort to put one half dozen into the finals, he knew his guys were back on track and ready to make its run to glory.

“We have a great mix of young and old guys on this team, so MCC wrestling will be in good shape when a few of us graduate this spring,” added Gustafson.

The Hurricanes were not in very good shape just a few years ago, and prior to the arrival of David Silva.

In 2015, they would finish seventh overall in this tourney, and one year later, sixth, with just 45.5 overall points, nearly 165 point behind champion Marist.

“We were terrible my freshmen year, I had a hard time even watching,” joked Randazzo of his first two seasons.

“Back in the day, we were just plain bad, but things have really changed at MCC,” adds
Silva, who stood proudly atop the podium to accept his prize with his proud Uncle David sporting a wide smile.

“It’s the kids commitment to excellence, and a great coaching staff that has helped turn this program around, and into one we can all be proud of,” said Silva.

The Hurricanes man in charge beams when speaking of his staff, which consists of Gus Sliva, Tony Randazzo, Jim Herff, Andy Randazzo, Lance Shelton, Tyler Nichols, and Will Gaddy, who came in this season after retiring from McHenry High School, where he put in 21 successful years, and nearly 300 career victories.

Silva, who was a four-time Fox Valley Conference champ and three-time state qualifier for Hall-of-Fame head coach, Al Zinke at Dundee-Crown, took over the MCC program two years ago, and made an immediate impact in the room and to his men.

“He’s been the difference in all of us, and along with a great coaching staff, which has been adding terrific coaches along the way, we’re all beginning to realize our potential in so many ways,” says Luke Silva.

“There’s a lot of talent in our room, and it appears that more is on the way,” begins David Silva.

“Success breeds more success, and the youth programs in our area see what we’re doin and want to be a part of it here at MCC.”

Luke Silva validated his lofty status in the state polls with his title at 160 to run his record this season to 36-1, as did his rookie teammates, who performed like veterans when called to the center of the circle for their championship contest.

“The last few weeks I feel like my confidence has been on the rise, but it was after my final at the Batavia tournament where I lost to No. 1 Kyle Schickel (Lemont) that I knew that I had turned the corner and was ready for whatever came my way,” said Shelton.

The aforementioned (Connell) used his first-place finishes at Geneva, then Batavia as a launching pad for his second half success, using it to squash a pair of opponents here, including a 12-0 major decision thrashing to earn his ESCC crown.

“Look around our room and there’s a tremendous mix of young and experienced talent, plus a great coaching staff for all of us to take advantage of (so) there’s no reason for any of us (not) to improve each and every day,” says Connell.

Sophomore Daniel Valeria (35-4) was unable to slow the Travis Ford-Melton (Marian Catholic, 19-1) express in his 126-pound final with the 3A star, while Anthony Randazzo did his best to bring the big crowd to his feet against Carlos Champagne (35-1) only to fall in a wild 16-11 final.

“Carlos is such a great opponent, and such a slippery one when he gets into a scramble,” recounts Randazzo.

“He tech-falled me last year here (it) wasn’t a good day for me, but tonight, I got in on him, the first, early on to get the takedown, and a couple more times afterwards, but he’s tough to finish against, and he can score so quickly with his speed.”

Champagne had a 4-3 advantage after one period, which he extended to 12-4 heading into the third period.

Randazzo would close the gap with a nice four-point play to make it 13-9 with one minute remaining in regulation, but another count put Champagne in control for good.

With all due respect to the Hurricanes wonderful roster and starting lineup, it’s the dynamic duo of Randazzo and Silva who have been the faces of the program.

Case in point, the two have combined for 258 victories, Randazzo with 128, Silva 130, against just 56 defeats, have advanced to five state tournaments (Randazzo with three) and each are coming off state medal honors a year ago.

Randazzo, currently No. 6 in the Illinois Matmen Go Earn It polls, was runner-up a year ago at 132, while Silva, ranked No. 2, finished fourth at 152.

“Luke and I are very fortunate to be on a team like this, we’re really close, and in fact, my voice is nearly gone right now from cheering for all of my teammates,” said Randazzo, who will wrestle next fall at the University of Central Missouri.

Silva, who is still sorting out his collegiate options, could not have been more thrilled with his teammates efforts to earn MCC its most coveted title thus far, but he knows this only the first stop of hopefully many before his dazzling prep career comes to an end.

“We’ll celebrate this ESCC title for awhile, but then it’s back to work.”

“We’ve got a tough regional next week at Harvard, where there’s a lot of strong teams, including Crystal Lake Central, who’s the No. 2 rated team in 2A.”

“We want to win that regional so we can put ourselves in position to get downstate and bring home a trophy, plus we also want to get as many of our guys into sectionals, then downstate for a chance to medal there.”

“Like I said, it’s been fun so far, but we know there’s so much more ahead of us to go after.” 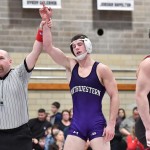