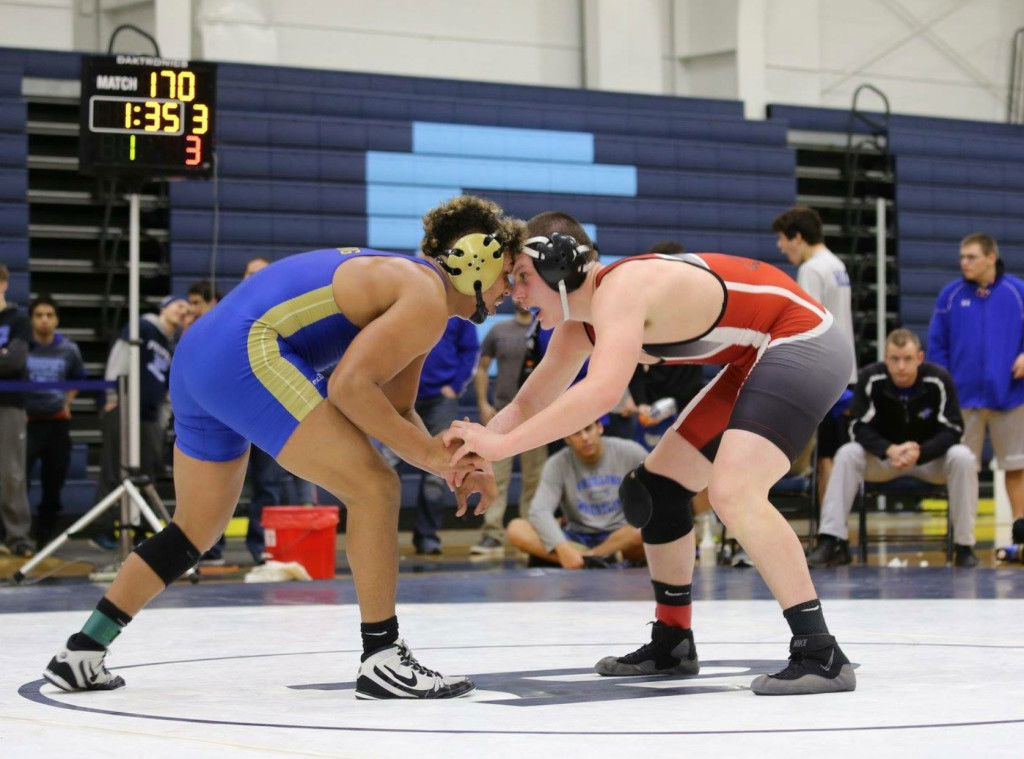 Fans of MSL wrestling have come to expect plenty of intrigue and drama when it comes time for the league to celebrate its annual conference tournament.

Last season, a late decision at 220 pounds in favor of Barrington helped the Broncos safely secure a 205.5 – 204 victory over Prospect to win the league title.

Two years ago, these same Broncos watched a determined club from Conant come all the way back from a 26-point deficit to win by a narrow three-point advantage (249-246) to lift the big trophy with its late surge.

So it was no surprise for Neal Weiner to see the big lead his men from Wheeling to be in jeopardy when the final round began yesterday at Jean Walker Fieldhouse in Mt. Prospect.

However, there would be no late dramatics this time, and with a little room to spare, and some quality performances from a few of his guys, Weiner, in his 31st year in charge – watched the Wildcats hold off Barrington to collect the MSL championship trophy.

“Barrington has a very good program and team (I) have a lot of respect for Dave Udchik, his staff and his wrestlers – so because of that, it imperative that we get ourselves as many wins and bonus points heading into the late stages (here) – because we knew they would make a big run at us,” said Weiner, who recently joined the 500 win club.

This former two-day tournament, now turned into just one, provided plenty of thrills and spills along the way, but not when it came to where some of the best in the state would reside.

Markus Hartman, Matt Wroblewski and Zach Nemec, all highly rated men according to Illinois Matmen’s current ‘Go Earn It Wrestling Apparel’ individual rankings – would validate their spots in the state polls after their championship work on Saturday at host Prospect High School.

Hartman was one of five from Barrington who collected a first-place trophy, and for the No. 3 rated 145-pounder, this would be his second of his career.

Hartman never was challenged on his way to his title, dispatching his first two challengers with a pin, and finally, a gritty Tristan Guaman (Wheeling, 26-8) who did all he could to stay away from a major, or worse during a 4-0 shutout.

“I kind of expected that type of match with (Guaman) – he was long, and really tough to get in on (and) hopefully turn, but it’s the type of match I should expect to see in the next couple of weeks, so it was good preparation for what’s ahead,” said Hartman, a state medalist one year ago. 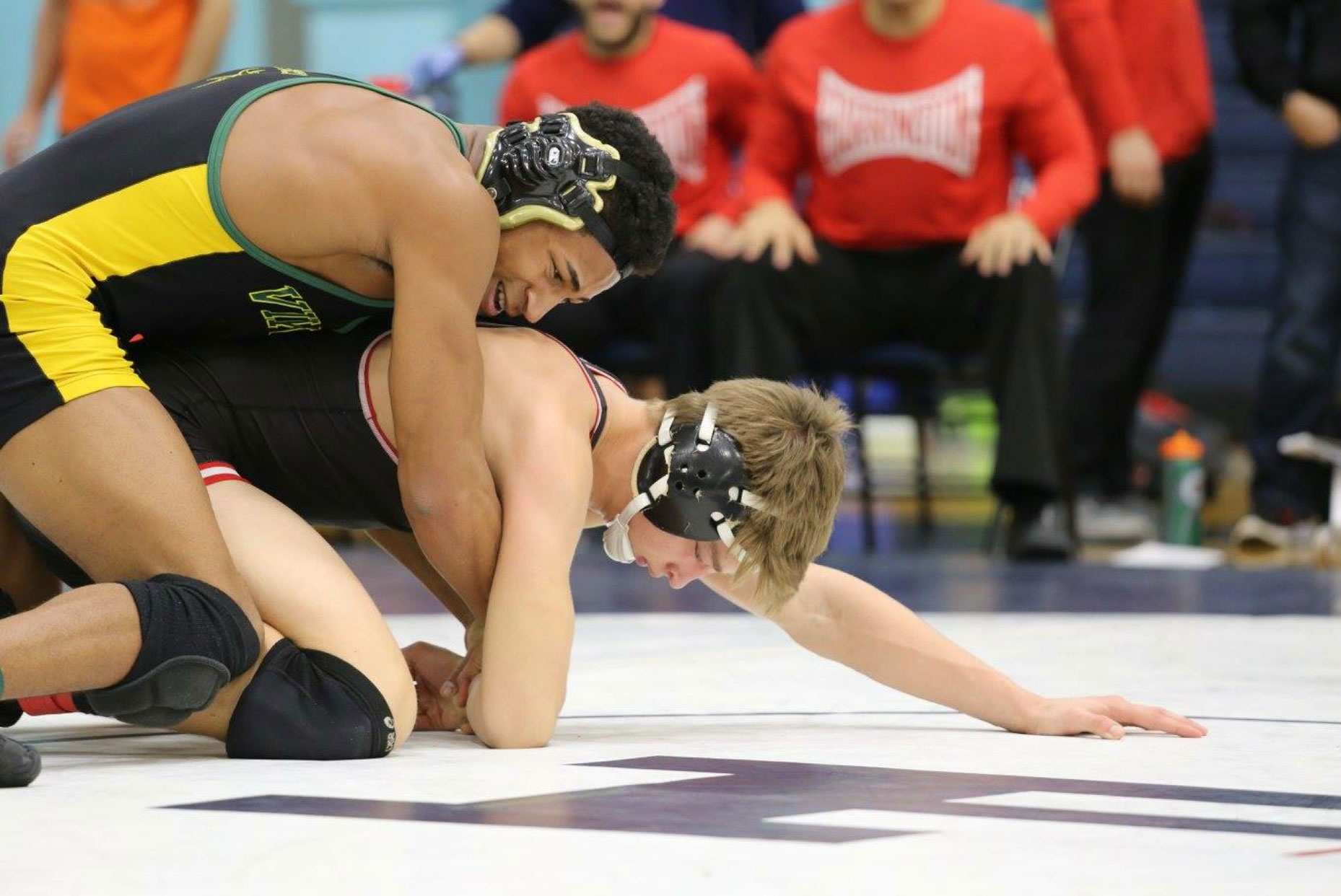 Wroblewski (25-0) made it look far too easy on his way to a third-straight MSL title, mashing a trio of rivals, all in just over six minutes to claim the top prize at 220 pounds.

“Of my 25 wins thus far, each has been either with a tech, or pin,” said the No. 2 rated four-year veteran, who has a regular routine following his short time on the mat that includes a series of exercises and windsprints immediately following his match designed to push the Knights star, and replicate something close to a six-minute contest.

Nemec, the big man from Fremd, looked all powerful during his three bouts en route to his second consecutive MSL title, including a short stay on the mat in the final that ended when he pinned Anthony Greco of Elk Grove in 1:47, giving him a scant 2:18 minutes of actual competition time.

“It’s a whole new Zach this year: he’s attacking, setting up his shots with more confidence, and using his surprising speed and quickness to score, and score more often than last year when he didn’t set the pace or tone of his match,” said a pleased Vikings head coach, Dan Ruettiger.

“Yes, (it’s) where things are so much better for me this year (that) and having a great partner in the room like (Connor McMillan) who I can throw around and hopefully help him out at the same time,” Nemec said with a smile.

The Vikings heavyweight will wrestle next fall at the University of Michigan.

Another teammate of Nemec, senior, Cole Riemer has come out of nowhere after his 24-win season a year ago to rise up to win his first MSL title, and push his overall record to a dazzling 30-3.

“Cole is another guy who has grown leaps and bounds,” said a proud Ruettiger.

“Mentally (Cole) is very strong, and he combines a little bit of a funky style, with an unorthodox’ style to become an excellent guy at 138 pounds.”

“I’ve spent a lot of time during the offseason getting stronger, and that, along with our coaching staff and my partners in the room have been the reason for the season I’ve had so far,” said Riemer, whose two easy wins leading into his final with Liam Collins (Rolling Meadows) produced a well earned 7-0 victory.

The top two clubs here would dominate the final round – with Barrington grabbing a tournament high five championship rings, the Wildcats three, with the first coming at 113 pounds from Manny Ramirez (37-4) who earned his second straight MSL title.

The junior never stopped attacking in his final with Conant sophomore, Alex Giuliano (24-8) – building a 4-0 advantage after two periods, en route to an impressive 11-a major decision.

“It was all about being smart, and just going for one sweep single after another,” said Ramirez, who beat Giuliano (5-4) early on.

Senior, Jaylen Shaw (28-4) admits his 11-6 loss in the finals of the Berman Holiday Classic to Dan Rasmussen of Barrington has stuck with him ever since, and provided all the motivation needed to get a chance to avenge the defeat.

That chance almost didn’t come when he edged Quinn Bergles (Fremd, 26-6) 2-1 in his semifinal to set-up another meeting with Rasmussen.

“I took a terrible loss to (Rasmussen) at the Berman, but I knew through hard work, faith in my coaches, and fine tuning a few things here and there (if) we met again, the result would be different,” said Shaw, after Illinois Matmen’s No. 9 beat No. 8 by a 3-1 decision.

A second period take-down near the edge gave Shaw the lead for good (2-1) and an easy out at the start of the third period gave him a little cushion for the Wildcats star who held off the Broncos junior down the stretch.

Both Ramirez and Shaw would bookend a marvelous effort from teammate Brian Madrigal (31-11) who, in between a tech-falls in his semifinal, would post a pair of falls, including the final, in which he felled rival, Anthony Silva (Prospect) at 3:01 to win the top prize at 120.

Barrington’s five individual champs came at the expense of four rivals from Wheeling, including freshmen, Kai Conway (27-7) and 106, who continues to shine during his rookie campaign.

“It’s hard to believe I won a conference championship – I kind of figured at the start of the year (maybe) fifth, or fourth overall, but never first,” said the affable Conway, who defeated Eric Lee 23-14) of Wheeling by virtue of a pin at 5:04.

Junior, Jarit Shinhoster (132, 31-4) countered the attack-minded Nicky Amato 21-6) with a solid six-minute defensive effort to slow the the Conant sophomore with a nicely executed 5-0 decision.

Amato came over from Montini to give head coach Chad Hay a powerful one-two punch at the lower weights alongside 126-pound runner-up, Tyler Futris.

After the Hartman victory at 145 pounds, next up was Jake Cysewski (33-8) who earned his first MSL crown with an exciting overtime finish against Carlos Montiel (Wheeling, 36-9) that saw the senior go straight from an overtime take-down (into) a pin to shock his opponent, and bring the Broncos faithful out of its seats.

“It’s just an amazing feeling right now to finally reach one of the goals you set for yourself when you begin to wrestle in high school,” said an exhausted Cysewski, who excels in tightly contested bouts such as these.

“Jake is the master of the one point matches,” said his coach Dave Udchik, who earlier watch Cysewski win his quarterfinal (3-1) – then semifinal over top seed, Adam Kemp (Fremd) by a 1-0 decision.

After the Cysewski thriller, and one match later, Jake Meyer stepped onto the mat and recorded a 5-1 victory over Andrew Lara (Wheeling, 20-9) in six minute match filled with quality from the Broncos junior, and 2016 state qualifier.

“I’m in a great room everyday, with great partners, and along with our schedule, I feel like I’m prepared for whatever comes my way,” said Meyer after defeating the No. 2 seed, Eric Hominac (27-6) of Conant in his semifinal.

Meyer is a rare three-sport student-athlete, who also playes football in the fall, and baseball following the wrestling season.

Meyer’s win at 170 would signal the end of the Broncos championship run, leaving others from around the league to enjoy a taste of success.

Schaumburg senior, Nolan Warner (195, 28-8) who enjoy, at times, being practice partners last season with the brilliant duo of Logan Gruszka, now wrestling at SIU-Edwardsville, and Tony Vezzitti, competing at Notre Dame of Ohio (both 2016 state medal winners)
earned the lone Saxons title on the day, after three last year, with Hazen Rice winning one also.

“I was really focused on getting into the final and winning it all,” began Warner, who will join Gruszka next fall at SIU, but not continue to wrestle.

“This was my last shot at it, but it takes a little bit of luck, and a lot of hard work, much of which began last year with those guys – so it feels real good to finally achieve this success.”

Nobody here would come close to the aforementioned Wroblewski, and powerful teammate at 182, Alex Koczwara (30-4) who handled everything and everyone that came his way, including Scott Anderson (28-16) of Wheeling whom the Prospect senior overmatched during his 11-1 major in the final.

“I’m not looking back from here on out, just as I did last year when I won my first MSL title, then a regional and sectional championship to get downstate,” said Koczwara.

“Only this year, I plan to getting myself onto the podium (and) hopefully to the top,” added Koczwara, who appears ready to take aim at the superb trio of: Kordill Norfleet, Jack Jessen and DJ Penick from his spot at No. 8.

One of the best feel good stories coming out of this day long extravaganza was that of senior Jackson Kohlberg (30-3), who began the third and final Kohlberg brother to win a championship ring.

“My brother (Aaron) was the last to win, and before that James one also, so to make it three (today) is really something special,” said Kohlberg, who went through the 126-pound field with ease to collect his top prize.

James Kohlberg would go onto wrestle at Northwestern following a record setting career for then head coach, Dave Froehlich. His uncle Neil, who would star at Wheeling under Neal Weiner, is a former two-time MSL champ from 1986 and 1987.

Wheeling would start the day in front, and on its way to 13 medals winners, and championship ending, but not without Barrington taking a short-lived lead (185-183.5) before using some solid work in the semifinals, coupled with a little help from its friends who sent the Broncos off and out of the championship round.

One of which occured was at heavyweight, where the aforementioned, and upstart, Greco (22-4) from Elk Grove, upended the Broncos, Eric Padilla to help offset the lone spot in the Wheeling lineup without an eventual medalist.

“There were a lot of points for us to be chasing heading into the final round (our) guys did their best – going out there with a lot of heart and desire to get into their lead, and maybe push past them (but) not today,” began Udchik.

“But you know what, good for Neal, and his guys, they were deserving conference champs.”