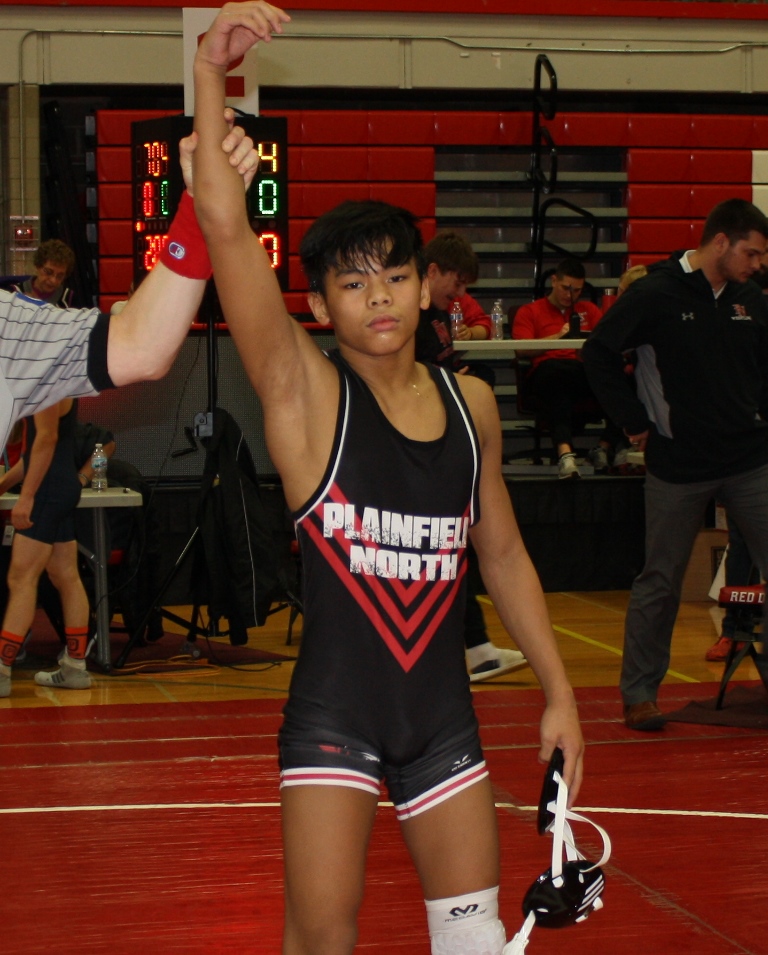 Plainfield North freshman Jacob Macatangay was feeling some jitters Friday as he prepared for his first match at the 53rd annual Rex Whitlatch Invitational at Hinsdale Central.

“It was nerve wracking,” he said. “It was my first big tournament. I knew it was going to be a challenge.”

Macatangay nonetheless had a sense of optimism, despite being seeded fifth in his bracket at 106 pounds.

“I knew I was seeded fifth because I hadn’t wrestled many good kids yet,” he said. “This was my first big test, but I felt like if I did my best, I could win it.”

Macatangay was right, as he emerged as arguably the biggest surprise champion at the Whitlatch.

The final, against No. 6 Ben Aranda of DeKalb, was more difficult.

Macatangay fell behind 4-1 in the second period but rallied for an 8-4 win.

“I just had to get to my offense,” he said. “I didn’t want to panic. I just wanted to keep going, keep wrestling hard.

“This boosts my confidence a lot. I knew I could do good, but this just shows me that I can do a really great job against good wrestlers.”

Macatangay’s accomplishments are even more impressive considering he has asthma.

“I’ve had it since elementary school, so I’ve gotten used to dealing with it and it’s gotten better,” he said. “I just try to push through it. Sometimes it gets really hard to breathe during a match, so I have to go get my inhaler.”

One of those instances occurred in Saturday’s championship match against Aranda.

“I had to take a little break for my inhaler, but it allowed me to collect my thoughts,” he said. “I was able to calm down and go back out there and do what I needed to do to win the match.”

Asthma has never stopped Macatangay from going all out at all times on the mat.

“Jacob is a guy that never stops wrestling,” Plainfield North coach Joby Bodi said. “He always goes hard until the end of the match, and that’s something you can’t teach.

“He’s got a great feel for the sport, great instincts on the mat, and he works really hard.”

Macatangay also took third at Conant’s Chris Hruska Classic, falling 9-1 to senior and second-ranked Jamier Castleberry of Proviso East in the semifinals, but bouncing back to beat Notre Dame’s Alex Randell in the third-place match.

He had a pair of pins in that tournament.

Macatangay was a fifth-place finisher at the IKWF state meet each of the last two seasons.

“Coming in and wrestling against older kids right away in high school has been tough, but it’s been fun to take on that competition,” he said. “I’ve just tried to go into all these matches confident in myself and knowing I have a chance to win.”

Macatangay said the largest adjustments he’s had to make with the transition to high school wrestling have come away from matches, as he’s getting used to more intense practices and training.

“Conditioning is the biggest difference,” he said. “We don’t do a lot of conditioning in middle school, so I’ve had to get used to that, especially with my asthma.

“I know all that hard work is going to help me down the road, though. I feel like I’ll be ready to go deep into matches.”

Macatangay has made a name for himself now, and he moves forward with a renewed sense of belief in himself.

“I feel like if I keep working hard, I can do big things this year,” he said.

“He’s got a really bright future and I’m excited to see what he can do.” 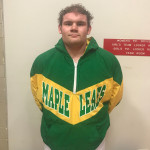 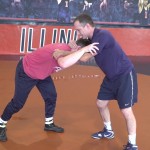