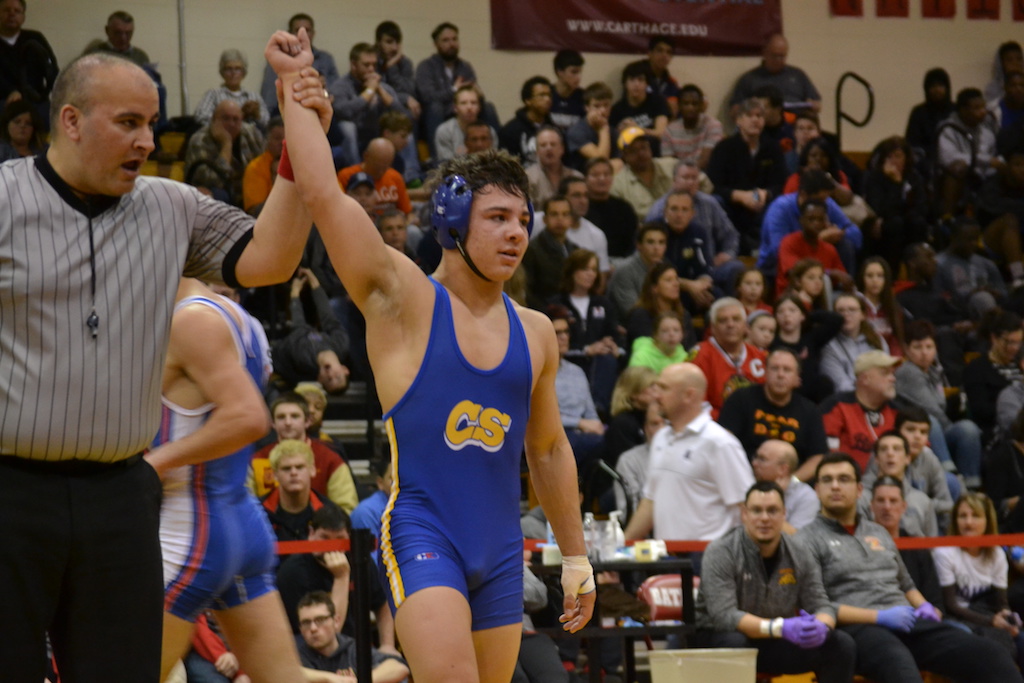 Three months of preliminaries are over. The weekend every Illinois high school wrestling fan has been looking forward to has arrived.

Five wrestlers will be bidding to end the season as three-time state champions. Four of them are in big-class 3A, and two, seniors Rudy Yates of Carl Sandburg and Dylan Duncan of Montini, are in the same weight class, 132 pounds. The others are junior Austin O’Connor (145) of St. Rita and senior Isaiah White (160) of Oak Park-River Forest in 3A and senior Randy Meneweather (170) of Washington in 2A.

A Yates-Duncan showdown would be only the third state final in the 79-year history of the state tournament matching multi-time state champions. The first two occurred in 2007, when Mike Benefiel of Montini won his fourth state title over two-time state champion Jordan Blanton of Richmond-Burton in the Class AA final at 171, and in 2011, when Joey Kielbasa of Crystal Lake Central beat Steve Robertson of Montini in the Class 2A final at 152 as two-time defending champions faced each other.

Yates (40-0), a University of Northern Iowa recruit, was the 106-pound state champion as a freshman at Brother Rice and won the 126-pound title in a Sandburg singlet as a junior. Yates, who carries a two-year, 84-match winning streak into the state tournament, also set the state’s technical fall records for a single season (29) and a career (65). Duncan (38-2), who will attend the University of Illinois, won his two previous titles in 2A, at 120 as a junior and at 132 last season. Yates has won both their meetings this season, 3-1 in the finals of the Cheesehead Tournament in Wisconsin in January and 7-5 in the Batavia sectional semifinals last week.

Some other notes about the field in each class:

Defending dual-team state champion Oak Park-River Forest leads the state’s large-school classification with 11 state qualifiers. Two-time champion White, an Ohio State University recruit, is the leader, and three other Huskies, senior Gabe Townsell (30-8) at 132) and juniors Jason Renteria (15-0) at 120 and Jaime Hernandez (26-6) at 138, are returning state placewinners. The second most successful team from that sectional – at Conant – was Prospect. The Knights qualified six to the State Farm Center, led by junior state placewinner Matt Wroblewski (39-0) at 182.

In all, eight teams advanced six or more wrestlers to this weekend’s state meet – and all eight remain alive in the dual-team state series. Marmion Academy advanced nine wrestlers through the Batavia sectional to finish second to Oak Park-River Forest in overall qualifiers. Carl Sandburg qualified eight and Montini seven, giving those teams nearly 43 percent of Batavia’s state tournament representation (24 of their 56 qualifiers). Sandburg leads all 3A schools with five returning state placewinners. In addition to two-time state champion Yates, the Eagles also return junior Patrick Brucki (44-2) at 182 and seniors Louie Hayes (40-2) at 113, 2014 placewinner Christian Robertson (33-5) at 138 and two-time placewinner Brian Krasowski (40-4) at 170.

Marmion Academy and Montini each return four medalists. In addition to state champion Traxler, the Cadets also return junior Anthony Cheloni (38-7) at 132 and seniors A.J. Jaffe (39-6) at 138 and Trace Carello (35-6) at 152. Sophomore Will Lewan (31-2) at 138 and senior Jimmy Pawelski (36-9) at 126, who teamed with Woods and Duncan to win seven 2A state medals, including three championships, all will try to win their first 3A hardware for the Broncos.

Rockton Hononegah advanced seven to lead the Barrington sectional, including senior state placewinner Fernie Silva (36-2) at 152. Lockport and Providence led the Bolingbrook sectional with six qualifiers each. State champion Oster, a Northwestern University recruit, and juniors Abdullah Assaf (18-3) at 120 and Trevell Timmons (23-6) at 152 give the Porters three returning state placewinners.

The deepest weight classes: 120, 132 and 138, each with five returning state placewinners. Defending 106-pound champion McGee and two-time state finalist Renteria lead 120 and the potential Yates-Duncan showdown leads 132. The three-man game at 138 – Hernandez, Jaffe and Lewan – also bears watching. Lewan’s 8-3 victory over Jaffe in the Batavia sectional earned him a split in two matches this season. Lewan, who also owns a win over Hernandez, could meet him in the quarterfinals.

Woods, Renteria, Yates, O’Connor, White and Wroblewski are six of the eight wrestlers who enter the 3A state tournament undefeated. Seniors Christian Brunner (44-0) of Dundee-Crown and Eric Johnson (44-0) of Plainfield South are favored at 195 and 220, respectively.

Since the championship matches will start at 285 pounds, we’ll know right away whether senior Matt Allen of Hinsdale Central will make a different kind of history. If Allen is successful, he’ll become the third Allen brother to win a state title at the same weight class, joining brothers Jack (2011) and Brian (2013) as heavyweight champions. Next season, Matt will join the two as a Michigan State University football player – as will King, favored to win 2A.

Having become the first school under the IHSA’s success factor to be moved up a classification in wrestling, Montini, which won the first seven 2A dual-team titles, is no longer in the classification – the Broncos are now in 3A. Taking their place: Chicago Mount Carmel, which is competing below the state’s highest classification for the first time in school history. From the start of the season, a showdown between the Caravan and the resident 2A powerhouse, Washington, has been on every wrestling fan’s mind – and the action at the State Farm Center will be a prelude to their projected meeting in the dual-team state semifinals at the U.S. Cellular Center in Bloomington a week from now.

Mount Carmel advanced 13 wrestlers to the State Farm Center, the most of any school in any classification. The Caravan advanced a wrestler in every class except 106, and three Mount Carmel qualifiers, junior David Riojas (38-4) at 170 and seniors Jake Tucker (38-3) at 152 and Dru Worker (34-6) at 195, earned 3A medals.

Add in school-record qualifier totals for Marian Catholic (10) and Tinley Park (eight), and more than half – 55 percent – of the state qualifiers produced by the Lemont sectional come from just three schools (31 of their 56).

For its part, Washington advanced 11 through its own sectional, the deepest in the state. Led by state champions Meneweather and Warner, the Panthers lead all schools statewide with six returning state placewinners. Junior Dack Punke (40-4) at 113 and seniors Trey Keeley (28-6) at 106, Dylan Thurston (35-5) at 132 and Ethan Reel (26-9) at 145 also have earned state medals.

The Washington contingent includes the most prolific brother combination in state history. Not only are four members of a family – the Punke brothers – competing in the state tournmanent for the first time, but the four are all competing in the same state tournament. The four, each in a different grade, are senior Ryder (160), junior Dack (113), sophomore Blaize (138) and freshman Jace (195). Dack Punke, twice third in state, is favored at his weight class. If one of his brothers joins him as a state champion, they would be the first brothers to win in the same year since 2012, when Mark and Matt McDonnell won Class 1A titles for Morrison.

There are nine undefeated wrestlers in the tournament, including two each at 145 and 160. Grau and junior Demauris Smith-Terhune (35-0) of Rantoul could meet in the final at 145, as could senior Jose Champagne (27-0) of Marian Catholic and junior Trent Rakers (39-0) of Highland at 160. Two other Marian Catholic wrestlers, freshman Travis Ford-Melton (39-0) at 106 and junior Kendall Norfleet (30-0) at 170, also are unbeaten.

The deepest weight class, by far: 170, which includes a staggering eight state placewinners. While a potential state finals rematch between Meneweather and Norfleet, who met for the 160-pound title a year ago, is the headliner, there’s plenty more firepower, led by senior Cole Witzig (42-1) of Troy Triad and juniors Riojas, Jake Lanning (41-4) of Pontiac and Cameron Caffey (35-2) of Carbondale. Junior Riley Vanik (35-6) of Kaneland and seniors Jared Smith (24-9) of Lakes and Cole Hunzeker (33-11) of Geneseo also own state medals. In all, 13 of the 16 in the bracket previously qualified for state. Not far behind: 113, which features five state placewinners, led by Dack Punke, plus unbeaten Padilla.

The most serious challenger to Dakota’s recent domination of the state’s small-school classification, Coal City, flexed its muscles at the Plano sectional by advancing 11 wrestlers to the state tournament, the most among 1A schools. State champion Rivera and senior Riley Kauzlaric (42-2) at 195, however, are the only Coalers who are returning state placewinners. With Plano, Wilmington and Bowen advancing six each to the State Farm Center and Walther Christian a school-record five, over 60 percent of the sectional’s state qualifiers come from those five schools (34 of their 56).

Competing in what is traditionally the state’s toughest sectional, at Princeton, Dakota will still be well represented. The Indians qualified seven to the State Farm Center, and could come away with as many as five champions. Seniors Henze, Krulas and Olsen enter the tournament as defending champions, and senior Jared Packer (40-5) and junior Andrew Wenger (32-8) are serious threats at 152 and 170, respectively. Also coming from Princeton, Byron’s twin terrors, Wilsie and junior Nolan Baker, both enter the tournament 40-0 and are favored at 126 and 132, respectively. Baker has pinned his way through the postseason, and could become the second 1A wrestler to pin his way to a state title. The first was his brother, Nelson, in 2014.

Vandalia, still alive in the dual-team series, was the only other 1A school with seven state qualifiers, which led the Carterville sectional. Normal University led the Olympia sectional with five qualifiers.

Wilsie, Baker, Kibler, Barnes and Monroe are among the nine 1A wrestlers enter the state meet undefeated. The others: freshman Ezra Elliott (38-0) of Hoopeston Area at 106, sophomore Chase Bittle (41-0) of Belleville Althoff at 120, junior Josh McKinney (32-0) of Midwest Central/Havana at 160) and senior Garrett Brachbill (43-0) of Shelbyville at 152.

Bittle will have to navigate the tournament’s deepest weight class, which includes five state placewinners. And Bittle isn’t the only tough sophomore at the weight. Jared Van Vleet (35-1) of Stillman Valley, Collin Davidson (43-5) of Litchfield and Stone Engle (37-6) of Mercer County also own state medals.

After three third-place finishers, Bittle’s Althoff teammate, Jarrid Braunagel (42-1), could finally break through to win this season, at 138. Sophomore brothers Danny (40-2) and Zac (39-4) Braunagel could join him as champions at 145 and 170, respectively, making 2016 the year of the brother act. However, Zac will have to navigate his way through another deep weight class. Led by state finalists Wenger and senior Nick Hawkins of Wilmington, the 170-pound class includes four returning placewinners.

Rob Sherrill is the author of Tales From the Mat: Illinois High School Wrestling at 75. A frequent contributor to the Illinois Matmen web site, he is the administrator of the GO EARN IT / illinoismatmen.com state rankings. He has covered wrestling in Illinois for 35 years for a variety of publications, including the Chicago Sun-Times, and has published The Illinois Best Weekly for 31 seasons. Also a high school wrestling analyst at the national level, Sherrill is the National High School Editor for WIN magazine. His newest publication, Beyond Tales From the Mat, will be released this spring. 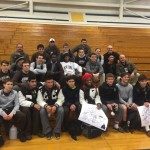