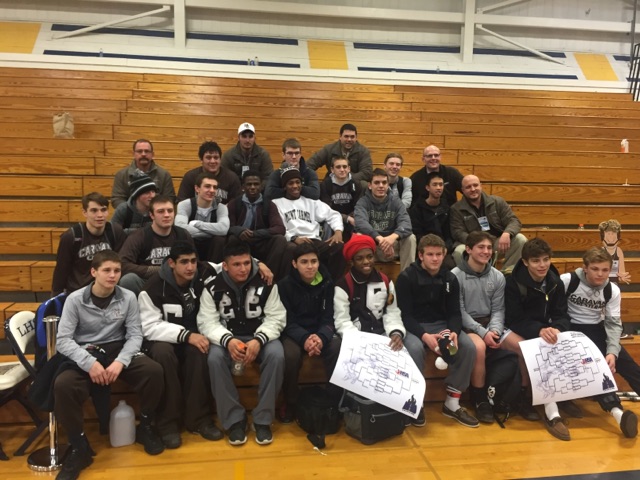 The Once and Current Caravan

Apologies to every single Mt. Carmel wrestler and coach that existed before 1986 but with names like Bill Weick, Ben Gerdes, and Jason Erwinski. It’s an easy, and hopefully, forgivable mistake to make.

One common thread of those just named? Success.

While the latter have produced numerous Chicago Catholic League, Individual State, and Team State Champions with the last names Williams, Davis, and Futrell, it’s the current name that has the goal of adding names to the list of legendary Caravan wrestlers.

This rendition of the Caravan is lead by Head Coach John Kading and with a long list of personal accolades; Kading is humble and practically reticent in discussing them.

While any coach following the Hall of Fame coach Bill Weick will have a daunting and heavily scrutinized task, and there have been great successes between the years of 2003 and 2011, Kading and his staff are singularly focused on the “now” rather than the “then.”

Starting in 2011, just walking into the room isn’t going to make any difference and Kading had to prove to these kids that he can get them to where they want to be – on top of that podium on a Saturday night in February.

Any coach has to prove their place and sell their brand of wrestling to a group of kids. When pressed about his past, Kading’s only answer is that “it may validate the things I have to say as I’ve been around some of the best coaches our sport has seen.”

The list of coaches is as long as it is amazing but includes Mark Manning, Kevin Jackson, and Bruce Burnett. Taking the athletic and life lessons from each coach along the way Kading and his staff are fostering a technique that is substance over style. Trimmed down, grind, power wrestling.

In short, the goal is to not over complicate things because, to quote Kading, “Basics win titles.”

One lesson Kading plucked from the days of working out at the Olympic Training Center was Bruce Burnett’s extremely detailed practice plan. As Kading puts it,
“Our practice plan is done in August. We know what we’re doing in the middle of January.”

With the coaching staff on board, the season plan set, and the style proven, the only thing left is for the student-athletes to fall in line but just putting on the brown and white singlet isn’t enough.

To build a successful program, student-athletes have to believe in their coaches and what they are preaching during practice, after practice, and before and after matches. They need to “buy-in” to the program.

Every sport, every team, every coach understands it’s importance. To have zeitgeist, a groupthink moment where everything is in sight and everyone is in agreement on how to move forward together.

Repeating his “Basics win Titles” mantra Kading explains, “you need to convey that to a young group” early on in the process. He continues with, “everybody wants to hit a big throw but it’s just not needed.”

Detailed-orientated, team-focused, and coach-led, this is the first senior class of student-athletes to go through the system. They trust in the system and have a bit of a maxim of their own. Inexactly put, it’s “Run? How Fast? Jump? How High?”

It’s a team concept, and while Kading and the staff are the unequivocal leaders of the program, one wrestler stands out above the rest.

On a roster steeped with individual IKWF success, Leo Ortiz, a student-athlete with no experience before he enrolled at Mt. Carmel, is a prime example on how belief in your team, staff, and program can make anything happen as long as you work hard.

‘He’s our team leader. He owns the locker room,” Kading says. “When we need to get a message across to the team, it’s Leo. He’s bought into the program.” Kading finishes the thought with, “When you put the work in, positive results will happen. That’s what Leo’s all about.”

It’s this type of belief and dedication that has built this current Caravan team into a Nationally Ranked line-up poised for a deep run in both the individual and team tournaments.

In typical Kading fashion, when asked to provide a more personal, specific instance or axiom he uses in the wrestling room to prepare the team for what lies ahead, he just repeated the point about basics.

Furthermore, when directly asked what from his past, while he was competing and adding to his resume, does he bring up to concretely validate their brand of coaching style, he still balked at the idea. Bypassing his individual accomplishments and focusing on the bigger picture instead, he provides a perfect answer.

“I don’t have one,” he answered “Not one specific but we went into Stillwater and beat Oklahoma State 19-18. Of everything I’ve done, that’s stuck out the most. And that’s what I tell them. Winning as a team is a great feeling, a great thing.”

This exemplifies precisely how, to quote Kading, “we, as a staff, repeatedly want to challenge them and want them to be part of something great. And I have complete and absolute trust in our staff.”

As the Caravan enters the final weekend of individual competition, it’s the team aspect of their journey that’s never more prevalent. Sending all 14 of their wrestlers to sectionals, the Class 2A Chicago Dunbar Regional Champion Caravan get to compete as team the week after the Individual State Tournament and they’re on the right path to finish on top of that podium on a Saturday night in February.

This includes back-up David Devine who stepped into the roster for the side-lined Kaleb Guzior, who plans to be back for the dual against Chicago High School for Agricultural Sciences in the first round of IHSA Team State Tournament.

Next MAN up isn’t really appropriate in this instance. It’s really next TEAM. And that’s exactly what Kading and the coaching staff wants – a team of student-athletes and not a roster of individuals.