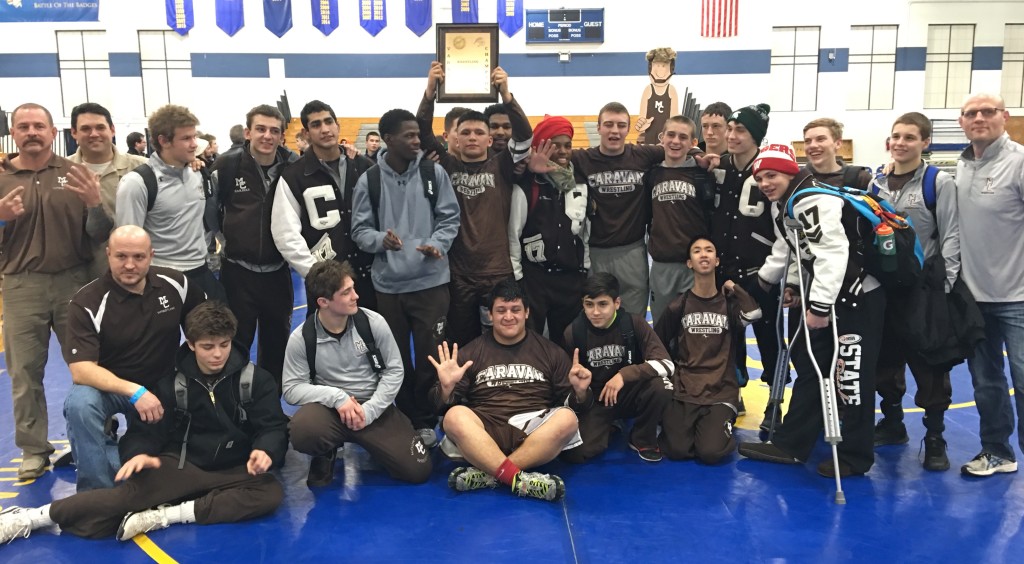 With Marmion Academy and Montini moving into the Catholic League Conference, the route to first place has become a rougher battle.

For the sixth consecutive season, Mount Carmel won the conference, this time with 241.5 points ahead of Marmion’s 217 and Montini’s 205 Saturday afternoon at DeLaSalle High School.

While each team had a trio of champions, the Caravan had more balance with four individuals placing second and third.

“We wrestled well,” said Caravan coach John Kading. “The conference is much tougher now. It’s a credit to our guys who put in extra hours coming in early in the morning, before the sun comes up, and staying after practice; working their tails off paid off.

“You have to battle the best to be the best [they won three of five first place bouts versus Marmion]; we got the better of it tonight.”

St. Rita’s Jacob Silzer (126) got a second period escape and rode out Montini’s Jimmy Pawelski for a 1-0 decision.

“I am feeling real good right now,” said Silzer. “I put the legs in and was able to ride him [in the third period]. I’m working more on scoring points and trying to be aggressive.”

The Mustang’s Austin O’Connor (145, 37-0) has been in a league of his own all season. The two-time state champion had three pins including a first period fall over Montini’s Caleb Fortuna.

“I’ve been working on top to get more angles so I can get pins, said O’Connor. “I feel I am stronger in every position and I am finishing better.”

With two seconds remaining, the Caravan’s Jake Tucker got an escape coupled with a fleeing the mat call against Marmion’s Trace Carello gave him a 3-1 overtime decision at 152. Teammate David Riojas (170) had a trio of pins on the day including a third period fall over Marmion’s Matt Ferraro.

“I stayed patient,” said Tucker. “He was trying to go around and let go and I was able to get two.”

The Caravan’s David Riojas (170) had a trio of pins including a third period fall over Marmion’s Matt Ferraro. Teammate Matt Reyes (285) added to the final tally with a 4-2 decision over DeLaSalle’s Solomon Smith in the semifinal and nipped Marmion’s Weston Kramer 6-4 for the title.

A strong offseason has been paying dividends for first-year starter Nate Jimenez (160) of Marmion. A takedown with two seconds left gave him a 3-1 win over Mount Carmel’s Cameron Lopez.

“I kept my composure, stayed in good position and got a high crotch for two,” said sophomore Jimenez. “I trained hard over the summer, I am eating right, I am in great shape and I am believing in myself.”