CHAMPAIGN, ILL.— In one of the most anticipated matches of the Big Ten season, top-ranked Penn State showed why they remain the favorite to win a Big Ten and NCAA Title. Cael Sanderson’s squad used three pins, two over ranked opponents, to defeat the Orange and Blue 30-15 in front of a season-high crowd of 1407. In defeat, the Illini saw undefeated wrestlers Isaiah Martinez and Zac Brunson have their streaks snapped this afternoon.

“I think at 157, that guy was ready to answer the bell and he did,” said Head Coach Jim Heffernan. “I guess he’s no longer undefeated, but if that’s the worst thing that happens to him in his career, that’s okay. Brunson, he was in on a shot with less than 15 seconds to go, theoretically to win the match if he finishes, almost finishes, gives up a takedown, and ends up on his back. You can’t let that happen. {We had} two number ones get beat, two number ones got pinned, we lost by 15 points. If our two studs aren’t going to win, we aren’t going to win very many matches.”

The Illini and Nittany Lions started the match at 141 pounds, where Mousa Jodeh stepped in for an injured Brock Ervin. Jodeh fought tough through the first two periods, surrendering just one takedown, but trailed 2-1 entering the third period. However, in the third period #16 Jimmy Gulibon netted four points with an escape, a takedown, and a final point for riding time to open the dual with a 6-1 victory.

At 149 pounds, Kyle Langenderfer had his work cut out for him, as he opposed No.2 Zain Retherford. Retherford started fast with a takedown to grab an early, and then clamped down on Langenderfer to get a 2:10 pin. The victory moved Retherford to a perfect 20-0, while giving Penn State a 9-0 lead after two matches.

The matchup headliner this afternoon came at 157 pounds where Isaiah Martinez put his 54 consecutive wins on the line against undefeated red-shirt freshman Jason Nolf. Nolf and Martinez battled each other through the first period, both grapplers netting a takedown and an escape. Nolf regained the lead with an escape to start the second period. As the second period entered its final 30 seconds, Nolf gained the advantage again and earned a takedown to put Martinez in a compromising position. Nolf held his ground for the full count for his tenth pin of the season.

“It was first match I’ve lost in two years,” said Martinez. “It doesn’t feel good to lose but I’m not making any excuses. Next time I’ll be better. I was rolling around too much. That’s probably where I messed up.”

For Martinez, it was his first loss since his first season on campus when re redshirted. The streak spanned 61 matches, 54 since the start of last season, and ended a run of 18 straight wins against ranked opponents. The streak that began 750 days ago saw Martinez win 48 of his 61 matches by major decision or greater, including 26 by technical fall. Last season, Martinez became the first freshman to go undefeated since current Penn State Head Coach Cael Sanderson went undefeated in 1999 and finished his career a perfect 159-0.

“I’m not thinking about the streak as much. It hurts to lose,” explained Martinez. “It doesn’t feel good. The streak aside, it’s not about that. It’s about the loss and how I can get better. The main goal is to win a national championship at the NCAAs and that’s what we focus on. I’d have liked to have won all the matches, but that’s where it matters. I keep a good perspective. I’ve been wrestling 18 years, so I’ve lost. It just hasn’t happened in awhile.”

With Illinois facing a 15-0 deficit, senior Steven Rodrigues showed resolve by overcoming the situation and getting the Illini on the board. Shakur Rasheed jumped out to a quick 6-0 lead with a takedown and near fall, but Rodrigues cut the lead 7-3 by the end of the first period. Rodrigues doubled his points in period two while not giving ground to the Nittany Lion, setting up a decisive third period. Rasheed extended his lead to 8-6 with an escape, but two takedowns by Rodrigues was too much for Rasheed, beating him 10-9.

“I just have to get off to a fast start,” said Rodrigues. “I’ve always had a good gas tank. I know I can win nationals this year, if I don’t give up early points, and then I can build my leads. I knew that he was done after that first exchange and I just needed to push the pace even harder and get off to my attacks.”

With Illinois on the scoreboard, the Fighting Illini turned to #1 Zac Brunson to continue the momentum against No.2 Bo Nickal. Brunson started out strong with a takedown, but Nickal used two escapes and a takedown to lead 4-3 entering the third frame. Brunson fought his way to an escape that knotted the score back up at 4-4, but Nickal responded again with a takedown in the corner of the mat. Similar to Martinez, the takedown left Brunson under full control of Nickal where the freshman pinned the Illini with just 11 seconds remaining in the bout. The loss was Brunson’s first of the season after the Illini pins leader had won 14 straight, but had only wrestled once prior today since winning the Reno Tournament on December 20.

Trailing 21-3, Jeff Koepke got Illinois back in the right direction with a strong performance against No. 12 Matt McCutcheon. After McCutcheon started the scoring with a takedown, Koepke got an escape in the first period and added another to start the second frame. With the score tied 2-2, Koepke locked his arms around one of McCutcheon’s legs and used his other leg to drop the Nittany Lion to the mat. Upon earning the takedown, and taking a 4-2 lead, an injury timeout was given to Penn State. After a minute and a half, McCutcheon was deemed unable to continue, giving the Illini a six-point victory.

At 197, Penn State featured the top-ranked wrestler Morgan McIntosh against Illinois’ Andre Lee. Lee held McIntosh within reach through the first period, but three takedowns from McIntosh proved to be too much for the Illini red-shirt freshman as McIntosh won 14-3, stretching Penn State’s lead out to 25-9.

Brooks Black earned is third win in Big Ten dual play this afternoon Jan Johnson of Penn State. Black started the scoring with a first-period takedown and led for the full seven minutes while racking up more than two minutes of riding time, as he defeated the Penn State true-freshman 6-2.

With the lead trimmed to 25-12, No. 4 Nico Megalucis stretched it back out to it’s largest of the day with a five-point technical fall over Francis Edelen of Illinois. Although Edelen held Megalucis in check through the first three minutes, Megalucis bounded back by scoring 22 points over the next 3:45 to win 24-9.

The Orange and Blue wrapped up the afternoon on a high note with Zane Richards keeping his perfect record in tact. Once again facing a top-10 wrestler, Richards secured his fourth win over a ranked opponent, all during Big Ten play. Richards used two takedowns in the first period to gain a 4-1 advantage and maintained it for all seven minutes, netting a point for riding time, to win 8-2.

Coach Heffernan and the Fighting Illini will have a week off to regroup before traveling to Madison, Wisconsin where they will battle the Badgers at 1 p.m. on January 31. 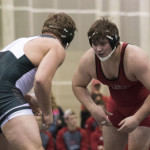 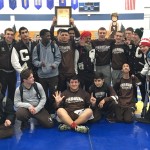