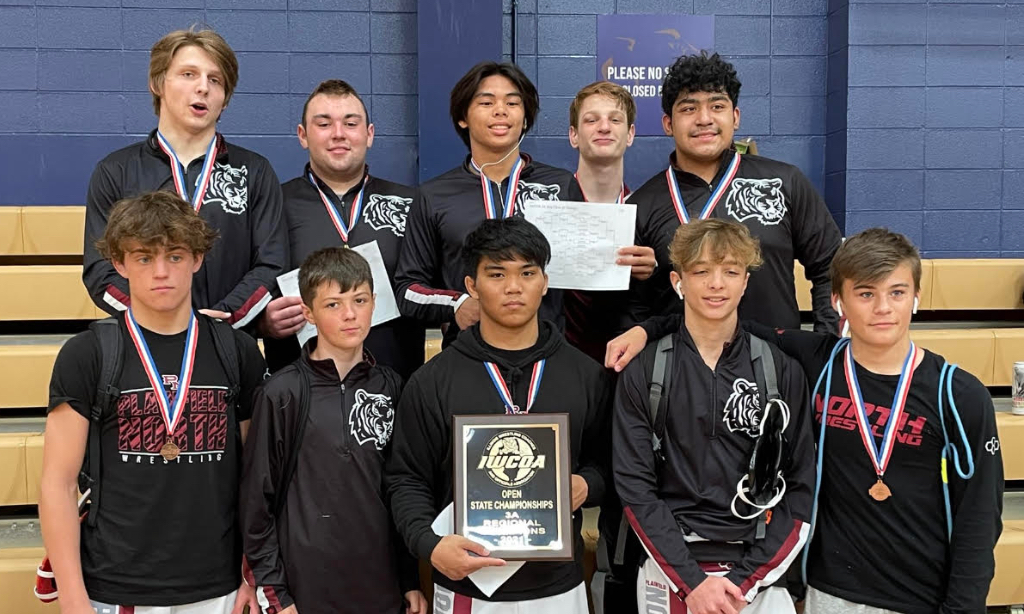 OSWEGO • Four years ago, when Joby Bodi took over the Plainfield North wresting program, he had a very focused philosophy on how he wanted to build his program. Now, four years later, the program and his team have been molded into his vision, and his wrestlers are reaping the benefits of their work. Sunday in Oswego, the team celebrated winning the 3A Super Regional by one-half point over Minooka, and Bodi feels that the work put in by his wrestlers have led them to this point.

“At the end of last season,” Bodi explained, “we had one our wrestling parents invest in a wrestling facility, so a lot of our guys got together and continued to train on their own when other teams didn’t have access to that type of environment. With all that work, I think that is what spring boarded us into the season. My thinking was that these kids have been practicing for almost six months, and now it’s time to compete—I didn’t shy away from anyone. I think we wrestled a pretty tough schedule and I honestlythink that paid dividends at the regional on Sunday.”

The competition was not the only task in front of his wrestlers. While some teams were able to wrestle maybe thirteen to twenty duals, at most, Bodi worked in thirty-five duals for his wrestlers. In that, Bodi began communicating what his team would soon find out come Sunday—they were ready.

“One thing that I was preaching is for them to believe that they are battle-tested and can wrestle in any match,” Bodi explained. “I think our guys took that to heart and maximized their opportunities. They really trusted what we were doing this year, trusting the fact that we only wrestled two times a day in any one situation, but we were stacking three and four weigh-ins. Doing that, which is a very similar physical situation for a tournament when you get to that fourth or fifth match, I believe was good for our guys. I think they felt good and fresh throughout the [regional] since they were used to it.”

Overall, Plainfield North advances nine wrestlers to this weekend’s I.W.C.O.A. Sectional Championship, and by placing in the top four as a team, they qualify for the I.W.C.O.A. Dual Team State Championships in two weeks.

The Tigers pushed four wrestlers into the championship match, and they claimed three of those titles by way of the guys who have been leading the way all season long and have aspirations of more than just qualifying for the individual state championships.

“Our heavy hitters are looking to make a run and I can’t congratulate them enough. And that’s Jacob Macatangay (126), Jared Gumila (152), and Kaden McCombs (285)—all guys who won the regional on Sunday. Those guys have been the face of our team this year. They go out and they understand what their job is and they put it on the line. I think each of those guys can be in the hunt for a title in the next few weeks.

The first individual champion came from Jacob Macatangay. He not only dominated his weight class, he remained undefeated on the year. In his first two matches, Macatangay would win by fall over wrestlers from Joliet and Moline. In the finals, he would defeat Logan Guerero of Oswego with a 13-3 major decision.

When Jared Gumila took to the mat for the Tigers, all he did was win and earn the maximum team points that he could. He would pin all three of his opponents, with only the championship match lasting longer than 00:42. In that match, he defeated Plainfield East’s Thomas Manetti by fall in 1:48.

Closing out the day for Plainfield North was their big man, Kaden McCombs. His closest match would happen in the quarterfinals, with a 1-0 decision over Hollist Daniels of Bradley Bourbonnais, and he would end his day with two falls, the second in the title match against Yorkville’s Jarek Slavin in 4:32.

Plainfield North’s other finalist, Braden Fike, at 170 pounds, wrestled in close matches and found ways to win, until he fell in the finals to Neriah Ayivor of Joliet Central. However, as the lone senior in the line-up, his making the finals, his efforts and advancement meant a great deal to the half-point team victory.

Bodi explained how “Fike is one of our most improved guys overall. He was a .500 wrestler in each of his first three seasons, and this year he is a thirty-match winner and has the second most pins on the team. He was able to avenge a loss from last Thursday in our conference final against Minooka’s Eli Lewis, and came back in the semifinal match and beat him 10-5. And that’s a huge team win for us with those added points headed to the finals. In the end, his efforts were rewarded.”

And, just as Fike’s advancement made a difference, so did the matches won in the wrestle backs and the placement points of the remaining five qualifiers due to their ability to endure.

“At 138,” Bodi commented, “Carter Alexander, ended up cracking the line-up three weeks into the season. One of our tougher kids dislocated his shoulder and he took on that role from there. He was a .500 wrestler and he wanted that starting spot. He ended up taking sixth place, which does not sound as impressive as some of the other guys, but with a half-point separating the team race, we’re not even sniffing a top four finish without his efforts.”

In the end, the title came down to the Tiger’s 220-pounder, freshman Leo Tovar, taking the mat. The entire tournament, the ups and the downs, played into every point, but Tovar was in position to close it out and win it for his team.

“Leo was on deck when I was checking the standings,” Bodi recalled, “and he wrestled the same kid earlier in the tournament and won by fall. Once I saw we were down by 3.5 points, I knew we needed a big match, so I said to him, ‘I think you have to pin this kid in order for us to win the tournament.’ It was a unique situation because all of the Minooka kids were done wrestling since some upper weights wrestled before him. And he looks at me and says, ‘I got this. I’m going to wrestle my style and go put him away.’ He stepped on the mat and did his job—he won by fall in 00:49; that’s a big moment for a freshman to handle and embrace that opportunity. So that was a really cool moment. When it happened, one our captains checked the standings and looked up, ‘[Heck], we won the tournament.’ It was a fun moment for the guys and it really capped off a crazy, chaotic season.”

Bodi credits the leadership of his captains, Macatangay, Gumila, and McCombs on making this group so tight knit. “Whatever they do,” Bodi explained, “whether it’s wrestling or social life—as a group they

go out to eat together every single day after a dual meet no matter what. They rally as a team and they support each other, and that stems from the leadership we have. Our captains all lead in very different ways, and the kids buy into what they say. It’s crazy to see our younger guys feeding off of them the way they do, and some of the lower-level guys look up to them and want to do what they do.”

Looking forward, Plainfield North is excited about the opportunity to continue wrestling through the series, and Bodi is grateful for this opportunity for his team.

“The I.W.C.O.A. has given every wrestler and every team a chance to wrestle this season,” Bodi said, “and I think everyone should be grateful for that. We have an opportunity to compete in Illinois and we have to take advantage of that.

“All season I’ve been preaching that we need to make the most of this opportunity. I knew they had the ability to win a regional title and make it to the dual team state series. We took a couple close dual meet losses throughout the year, wrestled some tough competition, and learned from it, but I kept preaching that we were nowhere near our peak—we’re just now starting to hit our stride. This week we have to keep working to maintain and work to get better. We don’t want to be a team that just peaks this year, we want to be a team that hits our peak each year moving forward. As I told them, we are battle- tested, and this weekend at the sectional will be another opportunity for them to prove it.” 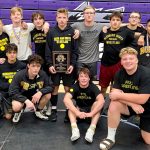 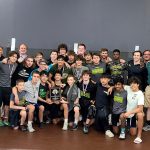