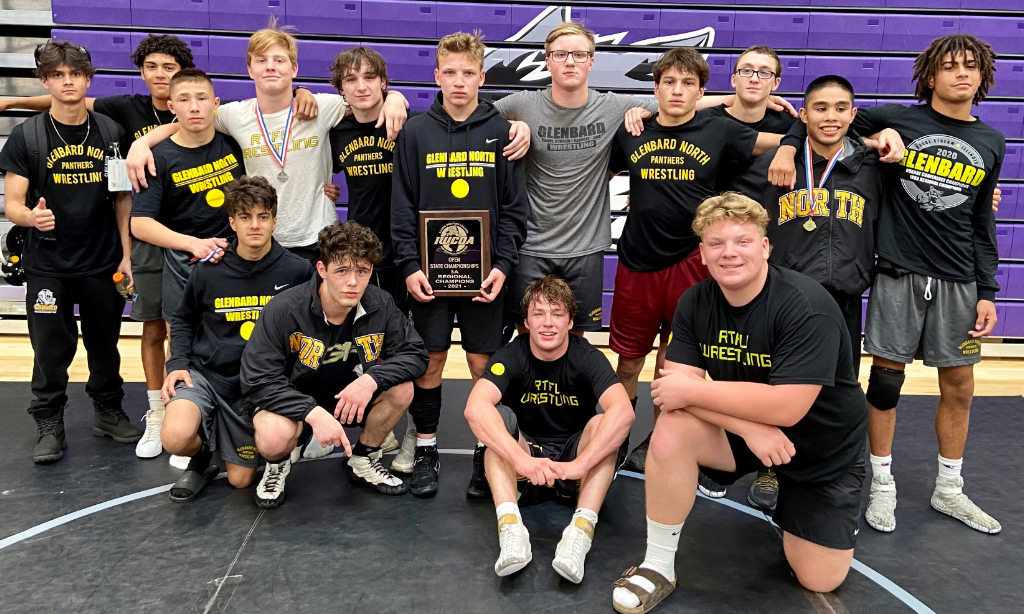 Glenbard North All Business as They Advance 14 to Sectional

“business
Junior College qualifier as expected, handling their business, and taking home the championship as they qualified all fourteen of their wrestlers to this weekend’s I.W.C.O.A. Individual Sectional Championships. In the process, the team also qualified for the I.W.C.O.A. Dual Team State Series which will take place in two weeks.

In response to how he felt his team performed, the Head Coach of the Panthers felt pretty good about his team’s first tournament of the season. “I think we wrestled well,” Cherry said. “I was a little concerned coming into our first tournament because I knew some guys were going to have to wrestle five or six matches. I wasn’t sure how the guys were going to respond and they did well—they adapted well and were ready to wrestle.”

As for what Cherry believed help set his squad apart from the field, it was their training. “I thought our conditioning and our mental make-up was great,” Cherry explained. “When those two things are clicking, good things happen.”

And good things did happen. The Panthers won 25 of their first 30 matches from the opening round through the heavyweight semifinal bout. Headed into the final round, they placed ten in the finals, three in the third-place match, and one in the fifth-place match.

The Panthers went three-for-three with Jimmy Marre at 113, David Gilliam at 145, and Jack Barracca at 152 all earning third-place finishes.

“We had two seniors place third,” Cherry explained. “At 145, David Gilliam ran into a buzz saw in the semifinals with [Ethan] Stiles [of Conant]. [Stiles] came back from wresting at Wyoming Seminary, and we will get match-up corrected in the room this week—hopefully we will see him again. At 152- pounds, Jack Barracca has been pretty steady for us. I love how he comes in; he is a coachable kid who works hard every day and he is doing fine.”

According to Cherry, the make-up of the program’s history helps them when they enter a tournament. “Teams know we are coming in and we are ready to wrestle all six minutes,” Cherry said. “And if we need to wrestle more minutes, we will—whatever it takes. It’s going to be a dog fight, it always is with us, and it’s not going to be easy to win matches against us. Today we won a couple of those matches. In

trip” for his team, and the number-one rated team in the state of Illinois came through the Joliet

fact, Jack was in one of those matches for third. He had to ride out a tough Lake Park kid for the entire third period to close out a 2-1 win. He has battled with that kid all year and when it counted, Jack was ready to go mentally and physically.”

In the finals, however, Glenbard would only capture three of seven titles. “We did take some bumps and bruises,” Cherry admitted. “Some guys were expected to win, but they weren’t ready to go. At this time of year, you can’t take anything for granted—you have to stick to the plan and fight in every position. I think some guys learned that lesson and I am confident our guys will make the necessary corrections moving forward.”

The Panthers were led off in the finals by freshman Dominic Marre. Unfortunately, he would fall to Joey Phelps of Schaumburg with a 9-6 decision. “Dominic Marre wrestled a tough tournament,” Cherry said. “He is young and wrestles tough and is doing the right things. He was in that match and he is right there—he will be fine.”

At 120 pounds, junior Paul Woo would drop a tight 3-2 decision to conference foe, Mikey DiBenedetto of Lake Park. “When those guys wrestle each other,” Cherry explained, “they battle. This was no different. I still think if Paul opens up sooner, he can break that match wide open.”

“Looking at our seniors who placed second,” Cherry reflected, “Lauden Edwards at 126-pounds took a little bump in the road, but we can get him corrected once we get back in the room. Kyler Kradle made one mistake in the first period against [Ryan] Riser from Lake Park, and that is a correctable thing that will allow for a better outcome on Saturday. And Patrick Curran, at 195-pounds, needed to stick to the game plan. And that’s all I am going to say about that.”

As for where the Panthers shined, it was with two wrestlers who partner up in the room each day, and a heavyweight who has made his name and presence known throughout the state this year.

At 132-pounds, Matt Chi scored a takedown with about fifteen seconds left to grab the title over Pierre Baldwin of West Chicago. “Baldwin is tough and well-coached,” Cherry stated, “but Chi is a machine and he had a great tournament. He split his lip open in the semifinals, but he responded and came back and beat a tough kid. He has a great motor and it makes it difficult for guys to stay with him.”

Nolan Allen at 138-pounds is another one of those machines in the line-up. Cherry calls Allen “a steady machine with one speed, and that’s go-go-go.” Allen would dominate his bracket winning all three matches by fall, the last one against Glenbard East’s Diego Garcia.”

As the day closed out, it was heavyweight Paulie Robertson who would leave the final mark on the regional for the Panthers. The big man pinned all three opponents, including returning state qualifier Colin Baker, of Montini, in the semifinals. In the finals, Robertson took 1:22 to capture the title against Elk Grove Village’s Emmanuel Gonzalez.

Cherry just shook his head and smiled when asked about Robertson. “Paulie Robertson came out and did Paulie Robertson things,” Cherry said. “He gets after people and puts them away. It is that simple.”

The final qualifier for Glenbard was sophomore Johnnie Robertson at 160 pounds, he placed sixth.

Exiting the tournament, Cherry spoke to a few takeaways he saw over the course of the day. “Our mental make-up was a positive team takeaway,” he commented. “I think all fourteen guys wrestling together was what set us apart. We preach that this is a team sport and not an individual sport, and it keeps us motivated and focused on our goals. I think our mat awareness can be better, but we have four days of practice to get some of that stuff fixed. Overall, I do think we battled all day. I had a feeling that some guys would take some bumps and bruises, but we showed up and did what we needed to—we took care of business.”

In regard to the tournament, Cherry believed that “It was well run. It was efficient and started on time, and everything went smoothly. The I.W.C.O.A. made this possible, and I know our program and kids appreciate the opportunity in front of us. We are excited as we head into these next few weeks.”