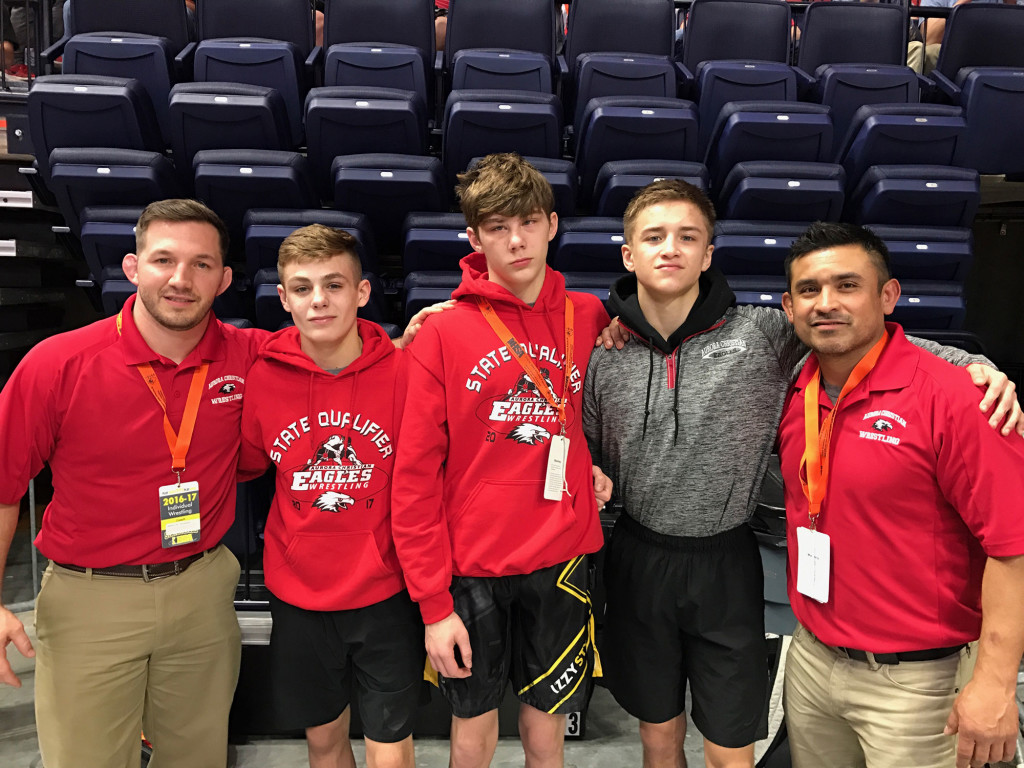 Aurora Christian making a name for itself at state finals

Last year, when Aurora Christian and Pearch agreed to start a wrestling program, the Eagles’ coach – despite his natural high expectations – never could’ve imagined where the program has gone in its first season.

“If you would’ve asked me a year ago if we’d have two in the finals and three in the semis,” Pearch said, “I probably would’ve said you were crazy.”

Turns out, the Eagles are flying high and making a name for themselves.

With just nine kids in the entire program, Aurora Christian won its first-ever regional title in its first season, is guaranteed three state medalists in Year 1 and has a chance to win two state titles at Saturday night’s state finals at the IHSA State Wrestling Tournament in Champaign.

“After seeing our kids train this season and seeing what they could do, I began to say, ‘Yeah, we could have 2-3 in the finals,’” Pearch said. “I really believe in these guys.”

The entire state is starting to do so as well thanks to its trio of freshman stars.

“It’s a really cool feeling,” Johnson said of the trio being state medalists. “We’ve been wrestling with each other since middle school. We’ve all been in the same club room and have been training together. It’s just been a lot of fun.”

The undefeated Johnson advanced to the 1A 106-pound state title match with a pair of convincing wins Friday as he won both his quarterfinal and semifinal matches by technical fall.

“It’d be awesome,” Johnson said of winning a state title. “It’d be a dream come true.”

Villarreal also had an impressive showing Friday as he won his quarterfinal by a 10-5 decision and then prevailed in the semifinal by an 8-0 major decision.

If he can win a state title, Villarreal would become the third member of his family to do so.

“Hopefully, I can do better than my uncle. It’s going to be tough, but it’s what I am aiming for.”

Marshall was unable to make it 3-for-3 as he fell in Friday night’s semifinal to 1A 113-pound’s No. 1 seed, but he looks to bounce back and finish strong in Saturday’s wrestlebacks.

Having the opportunity to have a program and wrestle at state was a process years in the making for Aurora Christian.

After Pearch was unable to qualify for Team USA for the 2012 London Olympics, the Portland, Ore., native moved to Illinois to join forces with Montini coach, club wrestling coach and his brother-in-law, Israel Martinez.

Once in Illinois, Pearch put his kids in school at Aurora Christian and, as he spent more time around the school, he inquired why it didn’t have a wrestling program.

He never really received a good answer but, a few years later, a parent approached Pearch with an offer to help start the program. The school and its athletic director were both on board and this winter was the first season.

“A year later, all of a sudden, here we are,” Pearch said.

While Aurora Christian has three state medalists, the season hasn’t always been easy as the program has encountered some adversity, including having just nine kids.

“The toughest part of the season was not having more team members in the practice room and more guys to battle with,” Pearch said. “It’s the same guys beating each other up every single day, and that can mentally wear on somebody. But these guys always believed in what they can do and they’re showing it here at state.”

Despite some limitations, Aurora Christian showed how far it’s come when it won the Class 1A Aurora Central Catholic Regional.

However, it didn’t come without struggles.

Since the program has just nine kids, there was some confusion as to whether it had won the regional since the IHSA mandates 10 kids must be entered into the regional to advance to the dual team sectional.

“We win the tournament, but they never announced us for first and they didn’t even announce us in the top 3, so we were like, ‘Woah, what happened here?’” Pearch said. “But when the next Monday came around, we got the trophy. We took a picture with it and told the guys, ‘We got it. We did our job, and we won a regional title.’ That was huge.”

Turns out, a team can win a regional with less than 10 kids, but since Aurora Christian only has nine kids in the program the IHSA ruled – per its bylaws – that the Eagles could not advance to the Tuesday’s dual team sectional.

Instead, regional runner-up Aurora Central Catholic will wrestle Rock Falls with a berth to next Saturday’s dual team state on the line.

“It was a letdown, definitely a letdown,” Pearch said. “We had the 10th kid, but the 10th kid decided that wrestling just wasn’t for him. I didn’t really know the rules leading up to the regional. If I did, I might have worked a little harder to get him to stay.”

That’s what makes Saturday – and what may come from it – even more special as the individual state tournament will be the end of Aurora Christian’s magical season but also the highlight for its freshman trio.

“I don’t think this would’ve been the same without the other two, and I’m not sure I could’ve done it alone,” Villarreal said. “Through all these years, they’ve been by my side win or lose. They’ve been tough practice partners and we make each other work our tails off.”