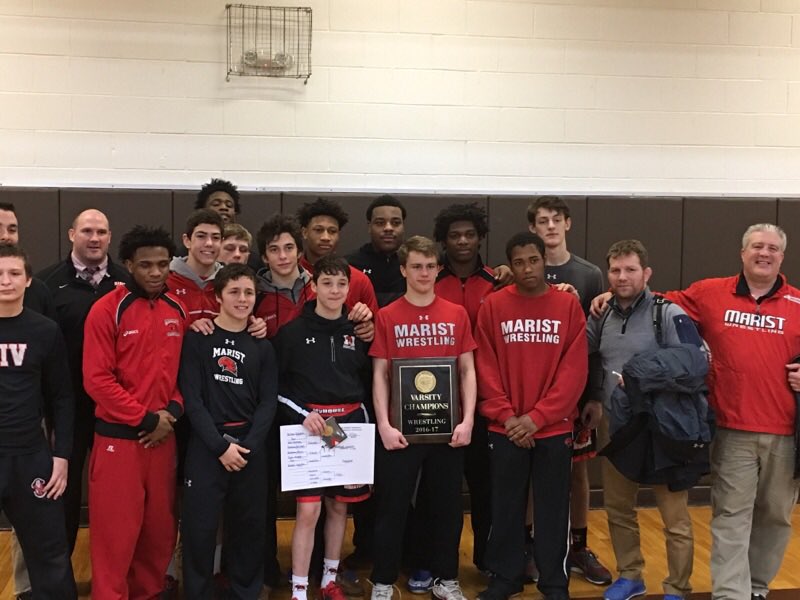 Marist did it again at this year’s East Suburban Catholic Conference tournament.

Despite a parade of seven individual champions from Marian Catholic to the awards stand – to Marist’s two champions — the Redhawks won their eighth consecutive ESSC team title, this time by a single team point.

“Bonus points,” said Marist senior Diata Drayton, who won his third ESSC title at 220 pounds. “We got them when we needed them and we avoided giving them up. Marian’s a good team and we worked hard to keep this streak going.”

Marist coach Brendan Heffernan’s boys had 12 wrestlers finish in the top four of their weight classes in the eight-team field. Third-place Notre Dame also had 12 medal-winners while Marian had eight medal winners among its 12 wrestlers entered in the tournament.

Also winning a title for Marist was Michael Leveille (106), who won by fall on the title mat against Marian’s Anthony Schickel.

“Laveille did a huge job of getting that pin in the finals, he didn’t have to fight all the way to the end for it but he did,” Heffernan said. “Frank Doyle (126) took second and got huge points for us, and he’s just getting into the lineup for us. Scott Bauer (160) took second but gave (Notre Dame’s Josh) Barzowski everything he could handle, and Kendric Nowling (170) took third for us. Those were all big performances today.”

Drayton was dominant in his three matches at 220, pinning all three of his opponents in under a minute, capped by a title-mat pin of St. Patrick’s Luis Rivera just 31 seconds into the match.

“I came into the year wanting to go undefeated,” Drayton said. “I stopped playing football this year so I could wrestle year-round. I’m more offensive this year, where last year I was more of a defensive wrestler.”

“It was a gutsy effort by the whole lineup. We tell them all the time to believe in what we do and by the end of the year, we’ll be wrestling where we need to be. We train the right way and everything is aimed towards this time of year, and we’re just starting the peaking process. It’s starting to show on the mat and this is the time of year when it counts. This is what we wait for.”

Valentino placed second at heavyweight in each of the last two ESCC tournaments. He is currently ranked third in Class 2A.

“I don’t want to discount winning this title – it’s obviously something I’ve been after, and I’m very proud to have won it,” Valentino said. “But there’s a bigger prize that’s out there. I’ve been to the state tournament two previous times, and came away with nothing. So the goal is to get back and win it all.”

Unbeaten Kordell Norfleet was the last of Marian’s seven champions on the day. Norfleet is the top-ranked 182-pounder in Class 3A and improved to 33-0 in winning his second ESCC title.

Norfleet worked on his feet into the second and third periods before pinning his two opponents. The senior won a Class 2A title at 170 pounds last season and in pursuit of a 3A title at 182 this season, he has worked tirelessly.

“At this point I don’t really have a choice,” Norfleet said. “If I want to repeat, I’m pretty sure there are a lot of people in the state doing the same thing. In order to not get upset or dethroned, I’m going to do what it takes.

“The biggest thing for me this year was getting active, because a lot of guys wrestle scared. I had to learn how to deal with it and force the action.”

Norfleet has not given up a single takedown this season.

Barzowski is ranked sixth at 160 in Class 3A and he improved to 32-3 with a late pin over Bauer. Barzowski wasn’t happy with the way he wrestled but he’s a different wrestler than the one who went 33-9 at 152 last season.

“I’m more aggressive out there and this year I’m finishing my shots ten times better than I did last year,” Barzowski said. “I have more confidence, too. The first match of the year I had Jack Mullay from Mt. Carmel, a tough kid. When I won that match, my confidence was there and I’ve had it ever since.” 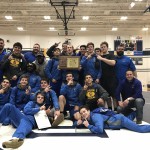 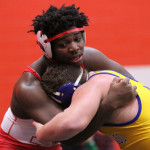