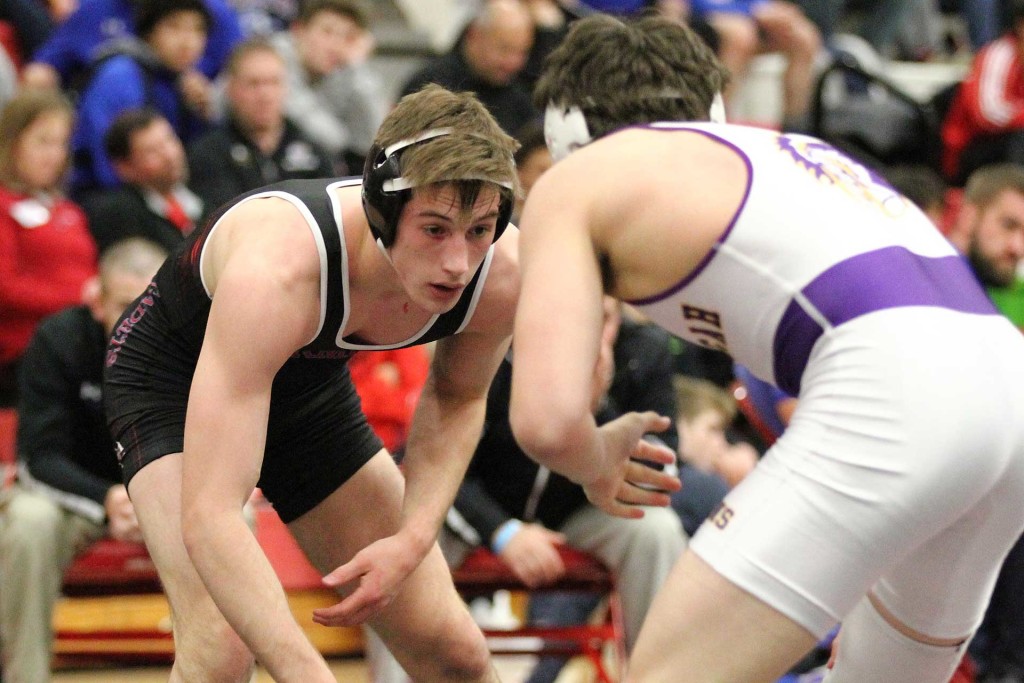 The new year means we’re a little more than halfway through the 2018-2019 wrestling campaign, and for Marmion Academy fans who learned their heroes lifted the championship trophy at Granite City, it meant a bright stretch run lies ahead for Nate Fitzenreiders’ men.

The Cadets first-year head coach could not have been more proud of his lads which outclassed a first rate field in Granite City, thanks in part to five individual titles, plus three top four medal winners to break open a tight race after the first day of play.

“What I am so happy with is with the second day effort, which was nothing short of amazing,” said Fitzenreider.

“(The) guys were just outstanding (competing) with maximum effort and purpose in order to win the championship to send us into the new year with plenty of momentum,” said Fitzenreider.

“It’s been a tough couple of weeks in and out of our room with injuries, and the passing of Brad’s (Gross) father, so to see the guys come out for that second day to wrestle tough, and with so much energy and desire says a lot about each and everyone of them.”

The former Wheaton North High School star, who then followed up with a brilliant career at North Central College, where he became a three-time D-3 All-American, four-time national qualifier, and winner of 161 matches, took over the Cadets program when Donny Reynolds moved back ‘home’ to become head coach at Providence Catholic, his alma mater.

“Fitz coming in to take the place of (Reynolds) has been seamless,” said senior Michael Jaffe, one of five Cadets to claim top honors at Granite City, and who will follow his older brother (AJ) to Harvard, where he will continue his wrestling career.

“We’ve been fortunate to have a great coach like Reynolds, then (Fitz) whose done an awesome job thus far.”

“He’s organized, can roll with us guys in the lower weights, and has been able to get us through a tough stretch without missing a beat.”

“I appreciate what the guys say, but it’s been a little easier coming in after Donny because I was one of his assistants last year, and it’s that same group of (assistants) that have been key in the head coaching transition,” admits Fitzenreider.

“To have a staff as we do (here) makes things so easy, I have no worries because of them, and along with a tremendous group of seniors, support from the administration, and the parent group, I could not be in a better place right now.”

The parent group Fitzenreider speaks of were front and center during Senior Day on the Saturday before Christmas when the Cadets welcomed six others clubs for its annual mega-duals, including former head coach, Ryan Cumbee, now head coach at Joilet Catholic Academy.

A well planned ten-minute ceremony for the graduating seniors ended on an emotional note when fathers of the eight seniors escorted Brad Gross to the center of Alumni Gym in order that his career highlights, and future plans could be told before a big crowd, which was on its feet to show its respect for Gross and his family.

“Brad has gone through a lot during the past year, and especially recently, but this entire program has been there for him, because we’re a family, and that’s what it’s all about before we do anything else,” said Fitzenreider.

Reigning state champion Trevor Chumbley says the work ethic Gross exhibits, and just having (him) in the room is the reason he believes Gross rates high marks this season, albeit in a part-time role for obvious reasons.

“It means a lot to all of us to see Brad in the room, and in our lineup, and I know it’s good for him as well,” said Chumbley.

Fitzenreider agrees with Chumbley’s suggestion, but when asked who he would list as the pleasant surprises on his club, he mentioned Patrick Daum, as did Diego Sotelo, and as well as Peter Ferraro.

“Patrick, at 182, has made huge strides during the last 2-3 weeks,” says Fitzenreider.

“He really looks like he’s ready to go for the second half.”

“Patrick worked so hard during the offseason, and he’s my pick as the guy whose been our most improved,” adds Sotelo.

“As far as Peter,” continued Fitzenreider, “it’s just great to have him back and injury free after missing most of last season, and he as well has shown he has a long run in him when the postseason gets here.”

The Cadets second major team title of the season (the Moore-Prettyman was the first) would also see: Chumbley and Sotelo claim their second major of the year.

Chumbley was magnificent during his two days in Granite City, recording four pins, two tech-falls and one major to advance into his final with Josh Saunders of Missouri Christian Brothers.

“Trevor had an incredible tournament, and when you beat one of the top rated guys in the nation (3-1) to win it all (that) says a lot about your weekend, and season so far,” said Fitzenreider.

Ferraro impressed in his final with David Ferrante of Huntley (8-4) in what Fitzenreider suggests could be a preview of the state final in Champaign.

With stops at the Moore-Prettyman, Ironman, and Granite City, in addition to hosting the power-packed lineup of: Detroit Catholic, Huntley, Lockport, Montini and Mt. Carmel, Fitzenreider front-loaded his schedule to have his men see all of the above prior to the new year, much to the delight of Chumbley.

“I like the schedule we have,” says the Northwestern-bound recruit, and 2018 state champion.

“It’s a good measuring stick for all of us, and it gives us a chance to wrestle some of the best (so) win or lose, we’ll all know what we need to work on, which we can (then) do in those last couple of weeks of the regular season.”

What lies ahead will be a thrill-ride through the likes of big dogs: Montini, Mt. Carmel and others at the CCL Conference tournament, followed by its own regional, and the expected challenge of Naperville Central, who by the way, is coached by Fitzenreider’s brother (Noah) who would preceed him at both Wheaton North and North Central College.

With the ‘second-season’ about to begin, all those questioned: Jaffe, Sotelo and Fitzenreider feel the club has earned solid grade of ‘B’ for the work put in thus far.

“We haven’t been altogether healthy of yet, but the energy, work rate and level in which we’ve been able to compete without us having our full lineup together makes me feel like we’re at a B+ (but) we all know there’s so much more to clean-up and fine tune before regionals,” suggests Jaffe.

Sotelo, currently No. 1 in the Illinois Matmen GO EARN IT polls, agrees with giving he and his mates a ‘B’ – but feels a higher grade is there for to be had.

“There’s been times when we’ve had five guys out of the lineup: Callaway, Chumbley, Gross, Ryan Fleck and Jacob Tinajero, so it would be easy to use that as an excuse (but) we haven’t.”

“(Instead) it’s challenged all of us, and I really feel like we’ll be better for it later on.”

“After the overall effort at Granite City, I’ll say, at this point, this team has a real solid ‘B’ – but we’re trending upwards, because of the senior leadership I spoke of, and the commitment of each man in the room to be better for himself, and his teammates,” said Fitzenreider in conclusion.