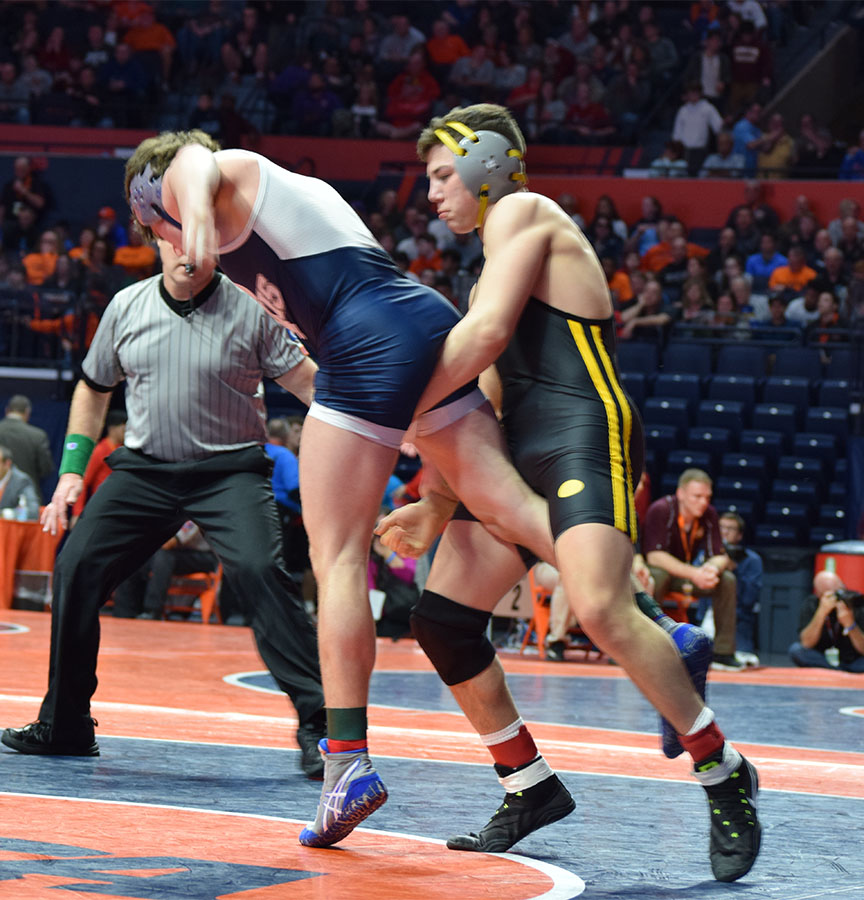 One match away from immortality.

That’s where St. Rita’s Austin O’Connor stands after yet another dominating win in the 3A semifinals at 152.

A first-period pin over Huntley freshman David Ferrante advanced the University of North Carolina recruit (45-0) to the finals and a fourth meeting this season against Providence junior Cole Smith. O’Connor won the first three meetings handily, by a pin and scores of 10-4 and 17-7. Smith (43-4) also rolled in the semifinals with a 14-1 major decision over Brad Gross of Marmion Academy.

The match will be the first of the finals – 152 is the leadoff weight – so we’ll know right away whether O’Connor becomes the state’s 16th four-time champion.

Ragusin’s win over fellow freshman Luke Odom of Edwardsville wasn’t without controversy. Within 30 seconds of scoring a three-point tilt in the third period to take a 4-2 lead, Odom was warned, then penalized for stalling to make it 4-3 before a Ragusin escape tied the score. The Montini freshman scored a tie-breaking takedown in the final 15 seconds for the win.

At 113, the fireworks seen in the semifinals of the Downers Grove North sectional didn’t repeat themselves. Melendez (44-4) made sure of that, scoring three takedowns in a 7-1 victory over Tommy Russell of St. Rita to advance to the final against unbeaten Domenic Zaccone (43-0) of Stagg.

Woods (35-2) scored his second straight technical fall to a fourth meeting this year against Anthony Madrigal (36-2) of Oak Park-River Forest, and the third of the high school season. Lewan (39-2) advanced with an 18-7 major decision over Duncan Nelson of Wheaton North.

If any of the four wins a title tomorrow night, Montini will have extended a state record with an individual champion for the 18th consecutive state tournament.

Seventeen of the 28 3A finalists are ranked nationally by WIN magazine, and both finalists are ranked at three weight classes: 170, 182 and 126. At 170, University of Illinois recruit Johnny Mologousis (No. 10) of Lyons Township takes on David Riojas (No. 11) of Mount Carmel. The other two feature a pair of top 10 wrestlers. At 182, unbeatens Jack Jessen of Willowbrook (No. 5) faces defending state champion Kordell Norfleet (No. 10) of Marian Catholic. At 126, Madrigal is No. 5, Woods No. 6.

Even one of the semifinals matched a pair of nationally-ranked wrestlers. At 120, 2015 state champion Michael McGee (No. 4) of Plainfield East shut out No. 14 Robbie Precin of Andrew, 4-0. 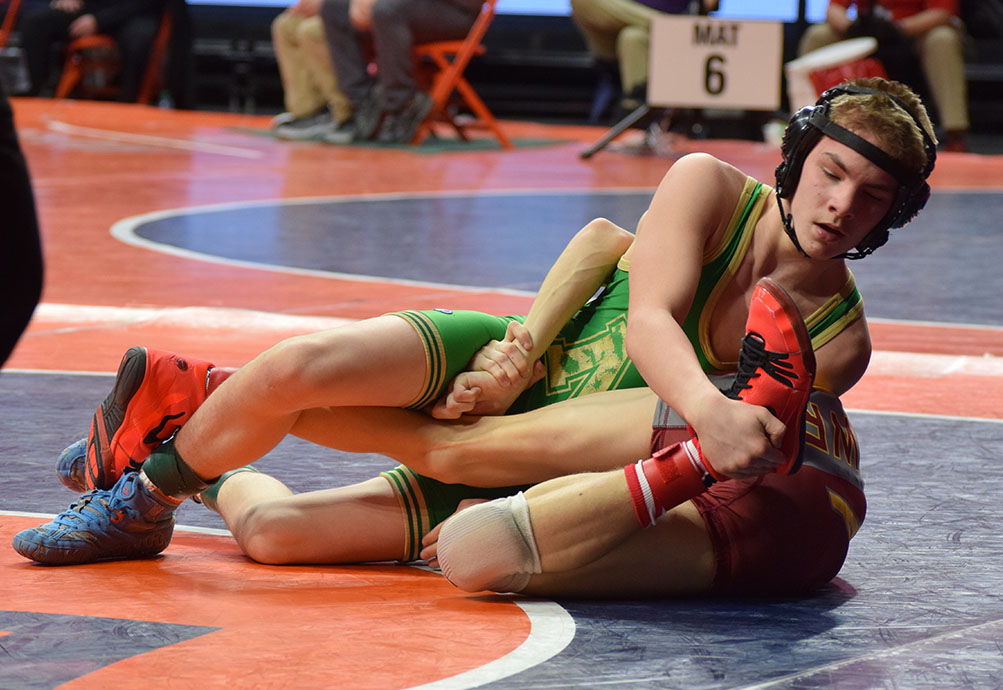 Four schools, Lockport, Oak Park-River Forest, Chicago Mount Carmel and Providence, advanced a pair to the finals. Lockport advanced Abdullah Assaf (132) and No. 20 Trevell Timmons (160), Kendall Coleman (138) joined Riojas as a Caravan finalist, and Jacob Lindsey (106) joined Smith in the Grand March for the Celtics. In all, 23 of the 28 wrestlers predicted to make the finals got there.

Washington matched Montini by advancing four to the 2A finals, led by the nation’s top-ranked 195-pounder, Jacob Warner (40-0), who pinned Fenwick freshman Jacob Kaminski in a battle of unbeatens. State champions Dack Punke (120), ranked No. 19 nationally, and Tyler Delaware advanced, as did Blaize Punke (138).

The only other 2A school with multiple finalists: Brother Rice, which advanced Hassan Johnson (120) and Scott Sierzega (220). At 113, Joe Arroyo, a 3A placewinner last year, became the first state finalist from Grayslake North. He will face Trevor Edwards of Mattoon.

For the second consecutive year, junior Chase Bittle (126) and junior brothers Danny (152) and Zac Braunagel advanced to the finals for Belleville Althoff, making the Crusaders the only 1A school with three finalists. Bittle is seeking his second title against Jared Van Vleet of Stillman Valley.

The only other schools to advance two to the finals were Aurora Christian, which advanced freshmen Cameron Johnson (106) and Noah Villarreal (120); and Fulton, which advanced brothers Tyler and Taylor Fleetwood at 120 and 285, respectively. Tyler Fleetwood is a defending state champion. Brothers have not won state titles in the same year since 2011.

In addition to Aurora Christian, a first-year program, advancing two finalists, two other 1A school snapped lengthy finals droughts. At 138, Zach Haley became the first finalist from Quincy Notre Dame since 1981. And at 152, a reversal with four seconds remaining lifted Arieh Hart of Anna-Jonesboro to a finals matchup against Danny Braunagel. The move gave Hart a 6-5 victory over Maxx Fritz of Mount Olive, avenging two previous losses this season and giving the Wildcats their first state finalist since 1984.