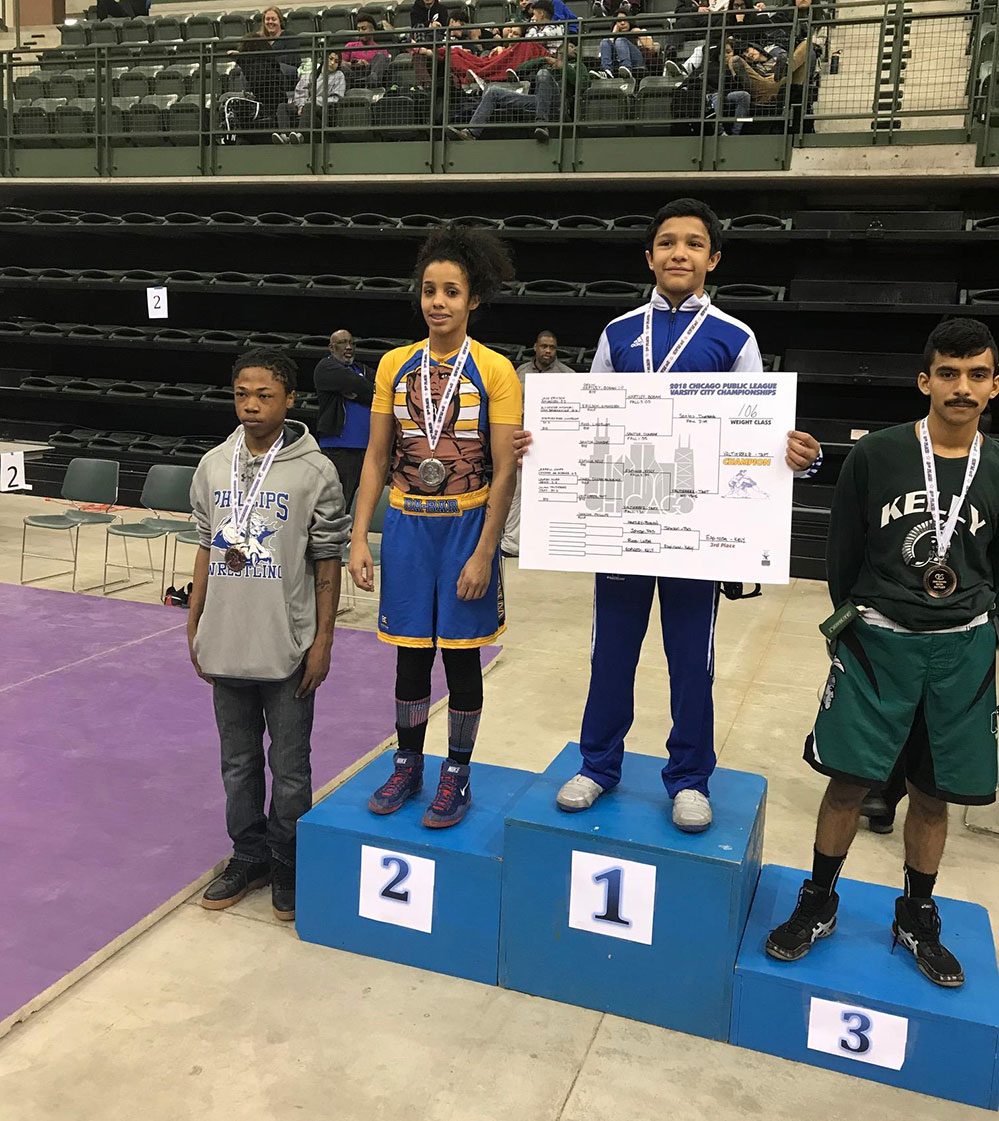 Photo caption: Dunbar’s Quiovany Santos (second from left) is the first girl to wrestle for a Public League title and one of just five girls to have won regional titles in Illinois. Mike Clark/Illinois Matmen

Three years ago, Quiovany Santos knew next to nothing about wrestling.

Now, the Dunbar senior has a college scholarship thanks to the sport.

It’s been an eventful ride for Santos, who made history on Jan. 21 by becoming the first girl to wrestle for a Public League title. She was pinned by Taft’s Julian Valtierrez in the 106-pound championship match, but bounced back to win the Class 1A Bowen Regional title last Saturday.

Santos and Richards’ Mia Palumbo, who took first at 106 in the 2A Lemont Regional, became just the fourth and fifth girls to win IHSA regional championships.

Santos — who’s known as Kiki by family and friends — is on the mat now thanks to her older sister Ninoshca, who also wrestled for Dunbar.

Santos was a sophomore then, with an admittedly limited knowledge of the sport.

“I knew it was a circle and you had to get someone on their back,” she said. “That’s all I knew.”

That’s changed under the guidance of Dunbar coach Lloyd Jimenez.

With depth an issue at a Class 1A school, Jimenez is more than happy to have girls to fill out the roster. He had six on the team last season and four this year.

“When girls take it seriously and they’re at lighter weights, they can actually compete,” Jimenez said.

It took Santos a couple of years to find that drive, according to her coach.

“She was not even serious till the end of her junior year,” Jimenez said. “And then she decided she wanted to participate in the same (summer program) the boys were.”

While Santos is more than competitive against boys at the high school level, she has been dominant against girls. She was the Illinois Girls Freestyle state champ at 112 in the Cadet/Junior division last May and took third at 117 among high school girls in USA Wrestling’s Preseason Nationals in November.

Santos’ success on the mat, plus her 3.8 grade-point average, has helped to earn her a 75 percent scholarship to wrestle for MacMurray College.

It’s also inspired Jimenez to start an age-group program for female wrestlers in Chicago. Called Windy City Ladies, it will launch this year with assistance from Chicago’s Beat the Streets Wrestling Program.

Jimenez said Windy City Ladies will be open to female wrestlers from any Public League school.

“That’s cool, the fact that we’re going to start a program where all these girls can come together and compete against other people they feel they can wrestle against,” he said. “They always feel the boys are too strong. … Now they have a chance to (wrestle) against girls.” 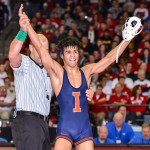