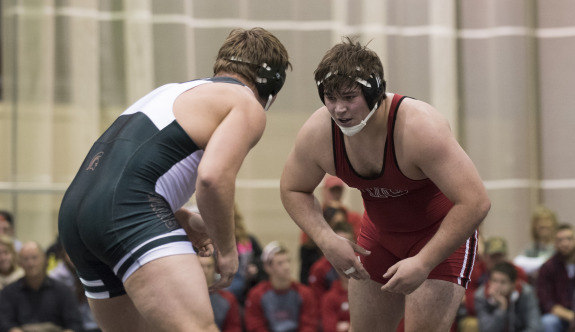 NIU RACED OUT TO A 7-3 LEAD BUT COULDN’T MAINTAIN THE ADVANTAGE.

ATHENS, Ohio – With “Snowmaggedon 2016” approaching eastern Ohio, the Northern Illinois University wrestling team had its dual matchup with No. 23 Ohio moved up two hours on Friday evening. The weather outside was cold, but the Huskies got off to a hot start to lead 7-3 before eventually dropping to a 23-10 final defeat in the dual against the nationally ranked Bobcats.

The Huskies (5-6, 0-3 MAC) were unable to ride the early momentum as the Bobcats (7-3, 2-3 MAC) won five consecutive matches in the middle of the dual to erase NIU’s early lead. No. 15 Steve Bleise (Chelsea, Mich./Chelsea) at 141 pounds won by decision at 141 pounds and Gabe Morse (Alto, Mich./Lowell) followed with a major decision at 149 to give the Huskies their early advantage. But NIU waited until heavyweight for its next win, with Arthur Bunce (Munith, Mich./Dansville) posting an impressive 2-0 victory.

NIU wrestling head coach Ryan Ludwig was pleased with Bunce and the other victorious Huskies, but was disappointed in the results of some other matches that could’ve went NIU’s way and swung the dual in the favor of the Huskies.

“We’re looking for better execution. We had opportunities to win matches that we dropped,” Ludwig said afterwards.

“Arthur Bunce did have a very nice performance and a hard-fought win. He was certainly ready to win. We’ll be back working hard now in preparation for Eastern Michigan.”

NIU will face another ranked opponent in conference play for the fourth time this season when the Huskies travel to Eastern Michigan next Friday for a dual matchup set to start at 4 p.m. ET/3 p.m. CT in Ypsilanti. 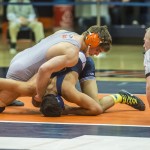