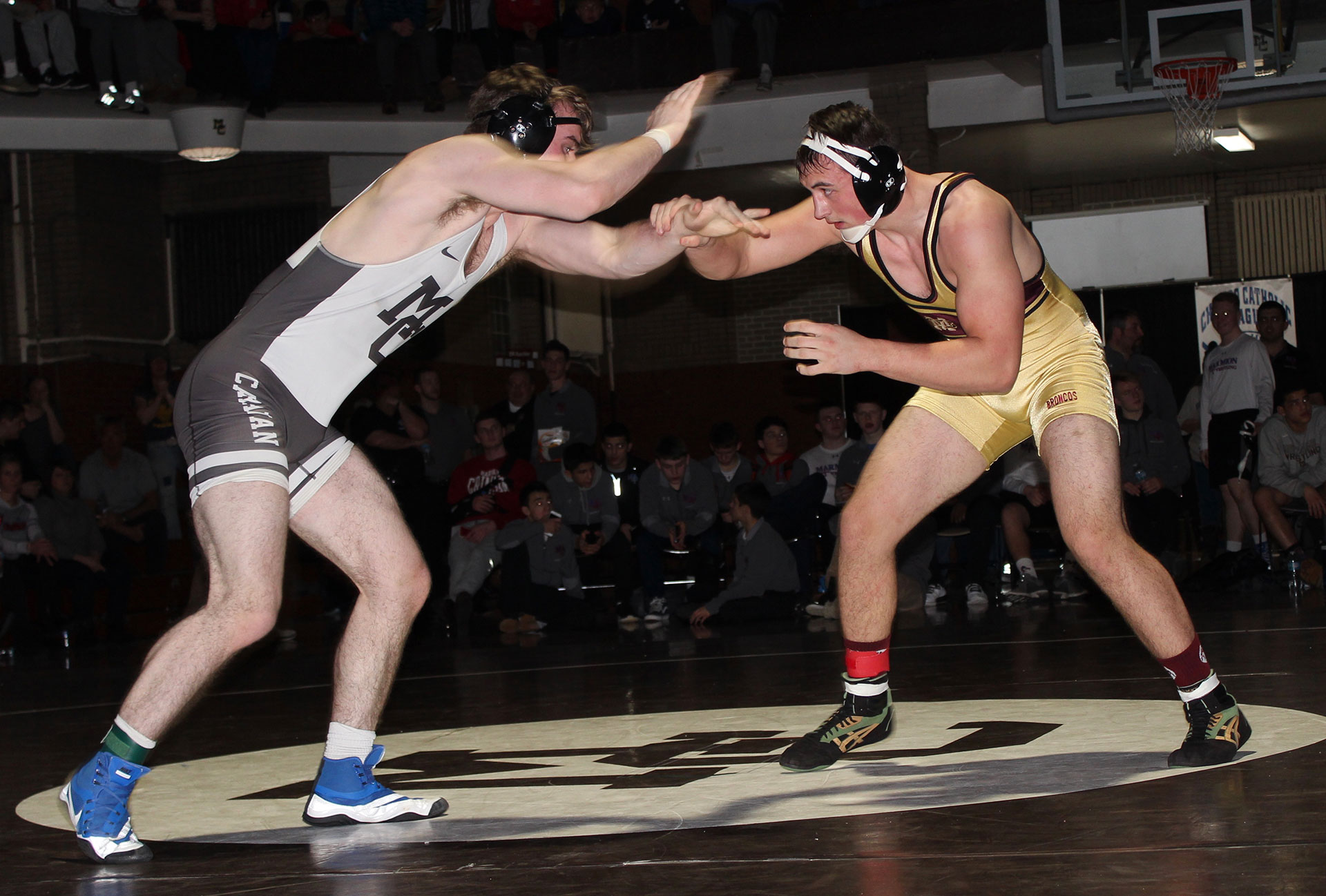 By now, Marmion’s Trevor Chumbley and Montini’s Fidel Mayora may know each other better than their own practice partners.

And that level of familiarity is only likely to go up.

In their seventh meeting over the past two seasons. Chumbley edged Mayora 3-1 to win the 145-pound title in Saturday’s Catholic League Tournament at Mount Carmel.

It was a typically tight matchup between the two nationally ranked opponents — Chumbley is No. 9 and Mayora is No. 12, according to Intermat.com.

“All the matches we’ve wrestled have been really low-scoring, really defensive,” said Chumbley, who beat Mayora in last year’s Class 3A 138 final. “Not a lot of scoring (but) a lot of action. I was trying to blow it open a little more this time.

“I didn’t get that, but I expect I’ll see him a couple more times this year.”

“Trevor is a special kid, he’s a true student of the sport,” Fitzenreider said. “Fidel is a really good wrestler. It’s a dogfight every time. You never know, it could go either way.

“It’s good to see (Chumbley) coming out on top again. Obviously we’re looking for that result a couple weeks down the line.”

Chumbley (32-2) was one of five champs for Marmion, which finished third with 270 points. Montini, which also had five individual winners, and Mount Carmel shared the team title with 276.5 points. The Caravan initially was announced as the winner with 277.5, but tourney officials later determined a scoring error had incorrectly assessed a one-point deduction to the wrong team.

This was the latest high-stakes event for Montini, which finished second in the Doc Buchanan Tournament in Clovis, Calif., and went 2-2 against four nationally ranked opponents at the Beat the Streets Brawl the previous two weeks.

“I’m a junior, all three seasons have been like this,” Ragusin said. “We wrestle the best teams. We only go after the best kids in the country.”

Mount Carmel had one champ, Colton Drousias (27-4) at 113. But the Caravan also had 12 more top-four finishers.

“We came through in the wrestlebacks,” Mount Carmel coach Alex Tsirtsis said. “At the beginning of the tournament, we had a decent lead and then in the semis we kind of dropped off a little bit. Those consolation and third-place matches, we stepped in and wrestled really well.”

Gross, who was named the tournament’s Most Outstanding Wrestler, has continued to compete after the death of his father, Scott, on Nov. 26.

“Brad’s in a terrible situation,” Fitzenreider said. “All of these guys act like brothers to him and we all support him.”

Marmion was missing senior Peter Ferraro, who was top-ranked in 3A at 170 but is out for the season with a shoulder injury. Ferraro, a Harvard recruit, placed fifth in 3A at 170 as a sophomore but missed all of last season with an elbow injury.

“That’s rough,” Fitzenreider said. “He’s a good kid, you just feel bad for him that he doesn’t get the opportunity to do what he loves. … It’s a shame that he’s not going tp get to go win a state title. But he’s still got a really bright future.”

“I’d just like to thank my coaches,” he said. “Without them, I wouldn’t be anywhere near where I am now.”

Boersma has been wrestling since fourth grade. But he had some moments of doubt coming into high school competition, knowing he’d be competing mostly against juniors and seniors.

“I really wasn’t totally, 100 percent confident at the beginning of the season,” Boersma said. “Right around Christmas, that’s when I really started to click.”