It’s not how you start, but how you finish.

At the IHSA Dual Team State Tournament in Bloomington, the Broncos started slow in the Class 3A title dual but came roaring back at the end as top-ranked Montini defeated No. 2-ranked Oak Park-River Forest 41-18 to win its second straight 3A dual team state title.

The Huskies – who also finished second to Montini last year – claimed the first two bouts to take a 9-0 lead and led 18-14 after eight weights, but Montini flexed its muscle as it won the final six matches and scored the dual’s final 27 points to pull away.

“Depth is everything at Montini,” said Broncos’ coach Israel Martinez. “We have some young kids who are eager to step up and we told those guys, ‘Be ready come the postseason because you’re going to get your shot.’ We told them to be ready, and they were ready tonight.”

Following back-to-back victories by OPRF at 132 pounds and 138 pounds to give the Huskies the 18-14 cushion, Montini’s Cooper Wettig started the run as he won by pin fall at 57 seconds to give the Broncos a 20-18 lead.

Montini 170-pounder Anthoney Geraci then prevailed by a 4-2 sudden victory to clinch the state title before Trevor Swier won by a 5-3 decision at 182 and Christensen prevailed by a 21-6 technical fall at 195 to cap the title effort.

“It’s awesome to finish on top, and to finish off my (prep) career on top is bittersweet,” said Stiles, an Oklahoma recruit. “Some of us older guys showed our experience, but we had some young guys really step up. All the hard work paid off.”

In the 3A third-place match, Marmion topped DeKalb 32-27.

The Washington seniors finished off a perfect prep career.

For the fourth straight season, the Panthers came out on top in Class 2A as No. 1 Washington defeated No. 3 Coal City 45-21 to win its fourth consecutive dual team state title.

“I think it’s going to take some time to let the four titles sink in, but the big thing for me is the senior class,” said Washington coach Nick Miller, who won the first two titles as an assistant and the last two as head coach. “As far as I know, four in a row has never been done by a public school. It’s a special group of seniors. It’s pretty awesome.”

Washington – ranked No. 1 in 2A all season – had little problems repeating as champs on Saturday. The Panthers beat Lemont 40-31 in the quarterfinals and topped Triad 45-24 in the semifinals to set up the title showdown with Coal City.

In the championship dual, Washington won the first two matches, five of the first six bouts and seven of the first nine matches to cruise to the victory.

“Momentum,” Miller said. “We wrestled Coal City earlier this season and we were down going into the last three matches, but I think the difference tonight is we’ve been here. These guys know what it’s like to be in this match.”

In the 2A third-place match, Woodstock Marian beat Triad 44-18.

When this season started, Lena-Winslow/Stockton coach Kevin Milder didn’t know what to expect.

What he got was another state championship.

With just two seniors and two juniors on the roster, the PantherHawks bested the field – including defending 1A state champion Aurora Christian 44-20 in the 1A title bout – to win their second dual team state title in three years.

“I don’t know if I ever could’ve envisioned this at the beginning of the year,” said Milder, now in his 25th year as coach. “We’ve just had so many kids improve and step up at key times. We took the hard road. We had one of the toughest regionals in the state, team sectional against Orion was a battle and we knocked off the No. 1 team. This one is sweet.”

“Our area is so tough, so when teams get down here they tend to be pretty tough,” Milder said. “But knocking off a very good Aurora Christian team by that score says something.”

In the 1A third-place match, Vandalia topped Heyworth 54-24. 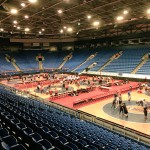 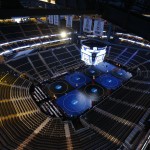