DEKALB, Ill. – Fighting Illini wrestling picked up its first dual victory of the 2018-19 season Friday, defeating Northern Illinois 24-9 at the NIU Convocation Center in DeKalb. Redshirt sophomore Dylan Duncan picked up six points for the Orange and Blue by pinning Alijah Jeffery in the 133-pound match to give Illinois an early 9-0 advantage. In his first career start, redshirt junior Carver James upset No. 15 Brit Wilson in a 4-3 decision. This is the 20th all-time victory against NIU for Illinois, and the Illini now hold a 20-9 advantage in the all-time series with the Huskies.

“That was a tremendous win for Carver James tonight against a very good opponent,” said head coach Jim Heffernan. “I also need to mention Emery Parker winning tonight after working out for just one day in the last two weeks prior to the dual. He showed a lot of the leadership and selflessness. We’re going to head back to campus and will give these guys a couple days off and let them prepare for final exams.”

Junior Travis Piotrowski made his first start of the season on Friday, facing a tough challenge from NIU’s Bryce West who entered the match 4-1. Piotrowski picked up a quick takedown to take and early 2-0 lead, but West responded with an escape to make the score 2-1 heading into the second. Piotrowski picked up another two points and conceded one to lead 4-2 going into the final period. West came up with a takedown to tie the match at four, but Piotrowski was able to respond late in the period with an escape point with 24 seconds left that proved to be the difference. Piotrowski earned his first dual victory of the season to put the Illini up 3-0.

Redshirt sophomore Dylan Duncan got his first start of the season against NIU and made quick work of opponent Alijah Jeffery. Duncan was able to get Jeffery on his back and come away with the pin at 2:07 into the match. The pin was the fastest fall Duncan has recorded in his career and his second victory by fall this season. The pin gave the Illini a six-point pickup and a 9-0 advantage two matches into the dual.

The Illini came up short in their next two matches, with redshirt freshman Abdullah Assaf and junior Christian Kanzler dropping their matches against Anthony Cheloni and McCoy Kent at 141-pounds and 149-pounds, respectively. Assaf lost in a 5-3 decision to Cheloni, while Kanzler dropped a heartbreaker in a 3-1 triple overtime decision to Kent. The Huskies picked up six points to make it a 9-6 Illini advantage.

Redshirt junior Eric Barone got the Illini back on track in the 157-pound bout by getting out to a quick 2-0 advantage over Mason Kauffman on an early takedown. After leading 2-1 to start the second period, Barone added on to his lead early in the second period with an escape followed by a takedown which put him ahead 5-2. Barone never looked back and was able to close out the matchup with Kauffman with an 8-4 decision victory, putting Illinois ahead of NIU, 12-6.

Redshirt junior Joey Gunther had a battle against Kenny Moore in the 165-pound matchup. Moore took the early 2-0 lead in the first after a takedown. Gunther acheived an escape to trail 2-1 heading into the second. After no scoring in the second period, Gunther made another escape to tie the match at two early in the third. Late in the third Gunther had Moore on the ropes, and Moore was called for stalling to give Gunther the late 3-2 lead. Gunther received a point for riding time to end the match, and earned the come-from-behind win in a 4-2 decision. Illinois led 15-6 after the victory by Gunther.

Redshirt junior Carver James made his first career start against FloWrestling nationally-ranked No. 15 Brit Wilson in the 174-pound match. After a scoreless first period, James jumped out in front in the second period with an escape and a takedown to take a 3-0 lead. Wilson was able to get a reversal to cut James’s lead to 3-2. A key escape by James nearing the end of the second period gave him a 4-2 advantage going into the final period. After an early escape by Wilson to make it 4-3, James was strong defensively the rest of the way and closed out a 4-3 upset decision victory over No. 15 Wilson. The win was the first by James against a ranked opponent, and the victory put the Illini in front 18-6.

In his first action since the Lindenwood Open, Emery Parker jumped out to an early 6-0 lead over Will Feldkamp. Parker never relinquished the lead and defeated Feldkamp in the 184-pound matchup in an 8-4 decision to put the Illini ahead 21-6. Parker remains perfect with tonight’s win, improving to 7-0 on the season.

Redshirt senior Andre Lee picked up the last Illini victory of the evening against Max Ihry in the 197-pound match. The two battled into overtime with the score tied at one a piece. Lee was able to get the takedown in overtime to win a 3-1 decision and give the Illini a 24-6 lead over the Huskies. The win was Lee’s team-leading 10th victory of the season. Deuce Rachal would drop a close 2-0 decision to Caleb Gossett in the heavyweight bout, but the Illini had done enough to earn the victory over the Huskies, winning the match 24-9.

Tomorrow: Several Illini will compete at the UNI Open tomorrow hosted by Northern Iowa the the UNI Dome at 9 a.m. CT. Wrestling for the Illini will be Mousa Jodeh, Johnny Mologousis, Nick Gasbarro, Tim McCarthy, Jake DiBenedetto, Brian Burns and Matt Wroblewski. Illini wrestlers competing unattached include Justin Cardani, Kenny Kerstein and Zac Braunagel. Results will be posted on Twitter (@illiniwrestling) at the conclusion of the tournament.

Looking ahead: After tomorrow, the next action for Illini wrestling will be at the end of the month at the annual Midlands Tournament at the Sears Center in Hoffman Estates, Ill. on December 29 and 30. Tournament matches begin at 9 a.m. CT on both days. 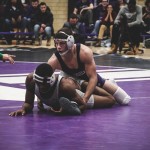