CHAMPAIGN, Ill. – No. 18 Illinois Wrestling was dominant in its 32-3 victory over Indiana Sunday afternoon at Huff Hall. The Illini won bouts in nine of the 10 weight classes. Three points is the fewest allowed by the Illini in a dual since defeating SIU Edwardsville, 41-3, on November 15, 2015. The Fighting Illini are now 4-2 on the season and 1-1 in Big Ten duals.

“I’m really proud of the way our guys came back after Friday and the 17 hours traveling back to campus,” said head coach Jim Heffernan. “We are continuing to improve and wrestle with some purpose.”

Redshirt freshman Justin Cardani got the afternoon started with a 6-2 win over Liam Cronin in the 125-pound bout. He struck first with a takedown in the first and never looked back, adding a point for an escape in the second along with another takedown. Cardani earned the riding time point to close out the 6-2 victory. Cardani is now 9-5 on the season and 5-1 in duals.

Senior Travis Piotrowski prevailed in his matchup at 133-pounds with Cayden Rooks. With the match tied at 1-1, Piotrowski came through with a takedown in the final seconds of the third, earning himself a 3-1 decision over Rooks. Piotrowski is now 15-2 on the season and remains undefeated in duals with a record of 6-0.

Redshirt junior Dylan Duncan dominated his way to a major decision in his bout at 141-pounds with Eddie Bolivar. Duncan did most of his damage in the final period, picking up two points for a takedown and then adding four more for the nearfall. He received the point for riding time, winning the bout in a 10-0 shutout. Duncan improves to 12-5 on the season and 2-1 in duals.

Redshirt senior Eric Barone picked up his second dual victory of the weekend with his win over Fernie Silva at 157-pounds. Barone recorded a takedown in the opening period that proved to be the difference, and would go on to defeat Silva by decision, 4-0. With today’s shutout win, Barone is now 8-7 on the year and 3-3 in duals.

Redshirt freshman Danny Braunagel achieved his third tech. fall of the season Sunday afternoon. He tallied four takedowns and two four-point nearfalls en route to defeating Davey Tunon, 18-3, in the 165-pound bout. Braunagel is now 15-4 this season, and 5-1 in duals.

Redshirt senior Joey Gunther took on Jacob Covaciu in a battle of ranked opponents at 174-pounds. Ranked 16th nationally, Gunther got the best of No. 24 Covaciu, with a first period takedown being the difference in Gunther’s 3-1 victory. Gunther is now 11-3 in his final campaign, and 4-2 in dual bouts.

Redshirt senior Zac Braunagel won by tech. fall for the second time this season at 184-pounds. He accumulated four takedowns along with two four-point nearfalls, going on to defeat Jake Hinz, 18-3.

Redshirt sophomore Matt Wroblewski struck quickly in his matchup at 197-pounds with Nick Willham. He picked up two points with a takedown six seconds into the match, and that would prove to be the difference in his 4-1 decision over Willham. Wroblewski is now 7-8 this season.

Freshman Luke Luffman closed out the dual with a win at Heavyweight. Luffman recorded a takedown for two points midway through the first period to take the initial 2-0 lead over Rudy Streck. He added a point for an escape, plus the riding time point, defeating Streck in a 4-1 decision. Luffman is now 11-4 this season, and 4-2 in duals. 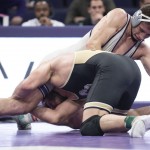