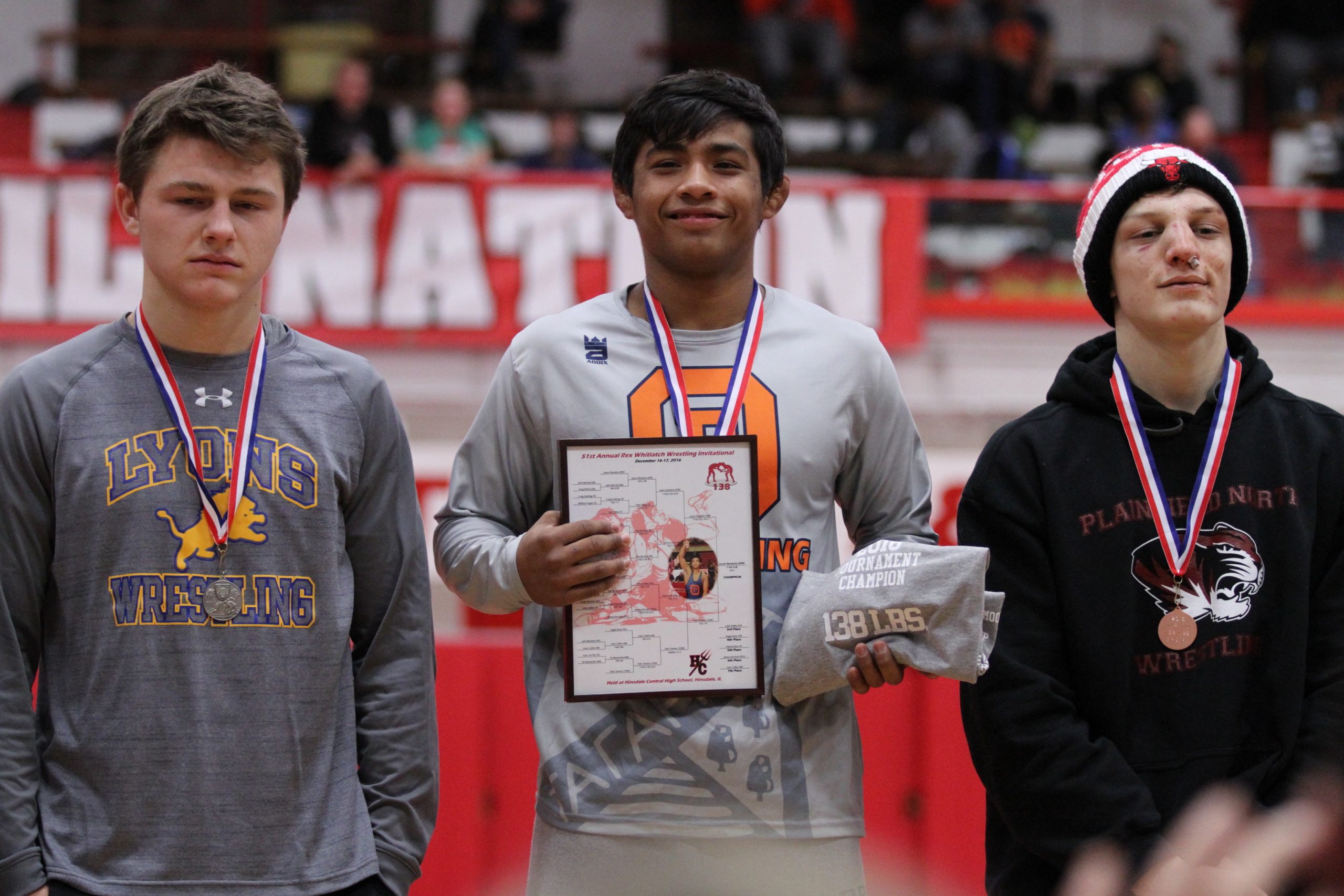 The confines of a 38-foot sized mat leaves little space to hide for the opponents of Jason Renteria, and the powerful punch of this three-time state medalist, who opened the season as the No. 1 guy on Illinois Matmen’s Go Earn It Wrestling Apparel charts – and the Oak Park and River Forest senior has done little to dispel his well deserved lofty status.

It would be something Nebraska head coach, Mark Manning would notice (one) day, while at the Ironman, he leaned over to Renteria’s mother to ask: who is your son.

After watching the then freshmen in his quarterfinal match, Manning would say to Mrs. Renteria that maybe one day he and his Cornhuskers staff may be recruiting him.

Fast forward a couple of years later and guess where Renteria signed on the dotted line to confirm his new address next fall.

“Obviously, being a part of a great program like OPRF, with all of its tradition, history and success (has) allowed us the chance to compete with a schedule filled with so many highly rated national teams when we go to places like the Clash and Ironman.”

“(Being) there also gives all of us the opportunity to open the eyes of college coaches who attend those high profile tournaments.”

“For me, it’s a dream come true to be going to my No. 1 college choice – Nebraska – which will allow me to be at a Big 10 school, is close enough for my parents come watch (both) in person and the Big 10 Network, and to move into the next part of my life.”

The four-year star listed both Nebraska and North Carolina as the early favorites to attend, but following his first official college visit (to Lincoln) knew it was the place to be.

“Everything felt so right for me the second I stepped onto the campus, so there wasn’t any reason to go anywhere else,” recounts Renteria, who would have joined with former OPRF teammate, Matthew Rundell at UNC, but instead meets up with, among others, 2016 Illinois State champion, Eric Schultz, of Tinley Park High School.

Areas of study for Renteria will likely trend towards being a Physical Therapist, or in the field of accounting.

Last weekend, at the highly regarded 51st Rex Whitlach Invite, Renteria moved up to the 138-pound weight class, and much to the chagrin of the 20-man field, provided plenty of discomfort for his opponents, whom Renteria systematically took apart on his way to the big trophy.

The reigning 120-pound state champion spent a little over 13.5 minutes on the mat over the two days of competition – three of which ended in tech-falls. But the short amount of time on mat proved well worth the price of admission for fans inside Hinsdale Central’s famed fieldhouse, who were treated to a brilliant display of work from Renteria.

“We knew Jason was good coming into our program because he was such a fierce competitor,” began Huskies head coach, Paul Collins.

“But our goal was to get him to channel that ferocity into his training, and to continue pushing him as a person.”

“When Jason arrived, he was pushed by the older guys such as: Alex Madrigal and Gabe Townsell. Those guys were great role models in regards to workout partners, and now, we see him providing the same type of leadership to the younger guys.”

Collins sites the Huskies annual offseason service trip to needy areas in which only soon-to-be seniors travel to, which this past summer was to Grand Rapids, Michigan.

“During that trip, Jason was one of the project’s best workers.”

“We talk a lot about giving back, and living for something bigger than yourself, and this trip was a great opportunity for Jason to show his caring for others.”

“We build houses, put siding up, cleaned where it was needed – and all throughout the four days (there) it helped make me feel just how fortunate I’ve really been, and how difficult it is for others – it was a real eye opener for me.”

After consecutive second-place finishes at the state tournament during his first two seasons, Renteria was given another eye opener of sorts when, last year, struggles with his weight and a shoulder issue gave him a late start to his season.

“I was going back-and-forth with my weight, and that shoulder thing kind of messed with my mind-set way too much (so) I finally got myself together, along with my weight and the mental side of things – (then) felt like I was ready to go.”

And go he did.

When finally up and running, and on his front foot, Renteria raced over and through the field, eventually lifting the championship trophy to finish his season with a spotless 19-0 overall record.

Including his current 15-2 overall record, along with his previous three seasons, Renteria owns a dazzling 108-6 record, the No. 1 spot in the Rob Sherrill weekly rankings, as well as his No. 6 national ranking for InterMat.com

“I’m not really into watching any of those polls. I just go out there, compete hard, and try to do my best for our team, while representing our program in a first-class way,” said Renteria.

Renteria says the highlight of his prep career thus far is the three straight (3A) dual-team state titles he and his mates have shared – “it’s the team stuff that really matters – plus just being in the room each and everyday.”

All of which may have not happened if it were up to his father.

“My dad is a HUGE baseball fan, and that’s the sport he wanted me to play. I know for a fact he was hurt and upset when I decided to wrestle,” Renteria said with a quick laugh.

Even though he’s the favorite to win it all come February in Champaign, Renteria is taking nothing for granted, in and out of the room.

“When you get into the final weeks of the season, and then downstate, anything can and will happen, and all the work I am putting in is to help insure that doesn’t happen to me.”

Renteria confirmed he will continue to push the pace, attack with his usual punishing, physical style, and not let up (off) the gas pedal, whether he’s on the mats for sixty seconds, or a full six minutes.

“It will have to be at another level next year at Nebraska,” admits Renteria, who figures he’ll be at either 125 or 133 for Manning.

“A bigger mat, riding time (which is so important) and four-point near falls (all) become so much more important. So a solid work ethic, and work rate this season will carry over into college.

“Jason has helped bring our program to another level, and we will miss his competitiveness, and leadership, because when he turns the switch and wrestles at his best, there are not many better than him,” says Collins.