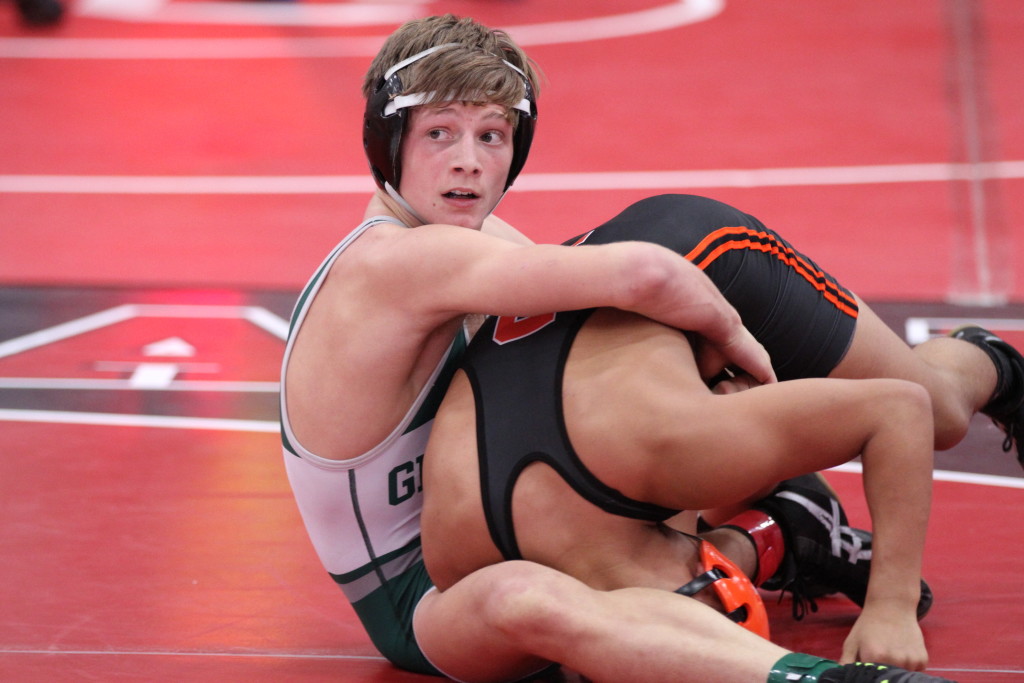 They kept coming at him but Charlie Faber had an answer every time.

In his semifinal and final matches at this year’s Rex Whitlatch Invite, Illinois’ fourth-ranked wrestler at 120 pounds took on a pair of high-pace wrestlers in DeKalb’s Fabian Lopez and West Aurora’s Isaac Jacquez.

The Glenbard West senior won 8-6 over Lopez and then won his first Whitlatch title with a 10-7 decision over Jacquez on Saturday at Hinsdale Central. Those two wins not only improved his season record to 18-0, they also provided him with two quality tests on the road to bigger things.

Faber placed fifth at 113 in Champaign last year and he’s itching to climb four podium steps higher this year. His experience as a junior downstate paid dividends against a pair of quality, high-energy wrestlers like Lopez and Jacquez on Saturday.

“I learned from last year at the state quarterfinals. I let up in my match and it cost me,” Faber said. “I refuse to let that happen again.”

Faber opened the tournament with a tech fall and then a major decision win before taking on the freshman Lopez in the semifinal round. Lopez kept his energy up and kept moving forward but Faber took and finished on quality shots in between scrambling out of danger at every turn.

Jacquez is currently ranked fifth in Illinois and he brought the same type of heat as Lopez on the title mat. Faber led 2-1 after a first-period takedown, and 6-3 after the second.

A Jacquez takedown in the third cut Faber’s lead to 7-6 but a Faber escape and takedown put him up 10-6. An escape point for Jacquez made up the final scoring in the match.

Jacquez is a three-time state qualifier who placed fifth at 113 his sophomore year.

“We were teammates back at Martinez (Fox Valley Elite) and we spent some time together working at Fargo,” Faber said of Jacquez. “So we’ve known each other for a while.

“I knew he’d be just like (Lopez). I just had to stay patient and take my opportunities. But that’s what’s great about the sport, when it’s two top guys going at each other. We’re all great technicians, we all have great conditioning, and it really comes down to who wants it more.”

“I thought both of those matches were a testament to his work ethic, because he was able to keep going in that third period in both cases,” Posegay said. “He kills it in the runs, he goes hard in practice, and he’s ready for those third periods.

“He’s also unflappable in those situations, where last year he was a little more flappable. This year he’s got a confidence about him.”

And with confidence comes a freedom that has Faber opening up in the circle more this year.

“I’m wrestling really loose,” Faber said. “I’m trying to focus on going out there and just wrestling my best match, and let the wins and losses handle themselves.

“When you’re wrestling loose you don’t have to think about anything. Everything comes instinctual. And that starts in practice. If you’re practicing more instinctually and loose, you’re going to wrestle loose. But if you wrestle tight and focus too much on whether you’re going to win or lose, then you change your style and you’re not wrestling the best you can wrestle.”

As much as Posegay enjoys coaching Faber the wrestler, it’s Faber the team leader that he truly appreciates.

“I knew after losing like ten seniors that I’d have to step up, if I wanted to have a good team,” Faber said. “I knew I’d have to try to set an example and push all these guys. Guys are starting to work after practice and they’re coming around.