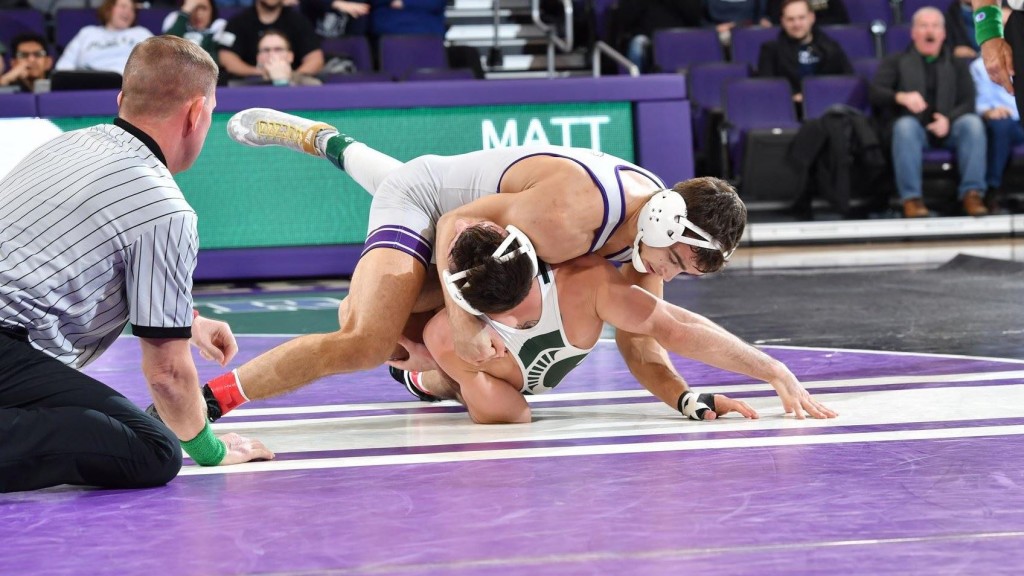 EVANSTON, Ill. — Northwestern secured its second Big Ten victory of the season with a 24-15 win over Michigan State in front of a Wildcat-laiden crowd on Senior Night at Welsh-Ryan Arena.

The ‘Cats won six of the 10 bouts on the night, four of which were bonus-point victories. The dual was headlined by major decisions from Alec McKenna, No. 1 Ryan Deakin and No. 13 Lucas Davison and a victory by disqualification for No. 18 Shayne Oster.

No. 16 Yahya Thomas started fast in his matchup against Alex Hrisopoulos, recording two takedowns in the first period. He kept the lead throughout en route to a 5-2 win by decision to extend the home team’s lead.

After a close first period for Deakin, the consensus No. 1 ranked wrestler in the nation entered the second up 2-1 but then got to his offense. Holding a lead in the final period, he took it up a notch with a trio of takedowns, with the third coming in the closing seconds of the match. The flurry gave Deakin yet another win by major decision, his seventh in nine dual matches.

At 165 pounds, Oster came back from a 6-0 deficit to win by disqualification against Drew Hughes, adding six more team points for NU. He wrestled tough in the third period to force a series of stalling calls on Hughes, with the fifth awarding Oster the victory. The senior has now won four consecutive duals in Big Ten action.

Lucas Davison started strong in the 197 bout with two takedowns in the first period against Nick May. After a tight second frame, Davison recorded a takedown and four nearfall points in the final seconds of the third period to notch a 12-2 major decision. Davison remains undefeated in the conference, improving to a perfect 9-0 in duals this season.

In the final bout, No. 11 Michael DeAugustino clinched the victory for the ‘Cats with a steady win over Logan Griffin. He started fast with an early takedown and remained strong throughout the dual, earning a 6-3 decision to close out the night.

With the win, Northwestern improves to 4-5 in dual action this season. The Wildcats will be back in action this Sunday, Feb. 9 as they take on No. 6 Ohio State at the Covelli Center in Columbus.

*All rankings come from FloWrestling as of Feb. 5.