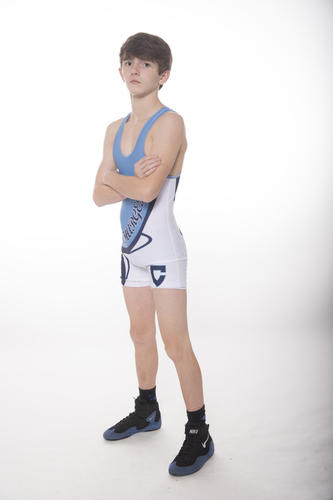 Then he got onto the mat.

“When he was a freshman, he didn’t look like he should even be in high school,” Centennial coach Ed Mears joked. “He looked small even in the smallest weight class, especially after everyone was given the two-pound limit. He had some tough opponents when he was younger, but he always seemed to live up to the competition and did really well.”

Despite being severely undersized when he entered high school, Cardani won 29 matches as a freshman and then 32 matches and qualified for state last year as a sophomore.

Now nearly 25 pounds heavier and four inches taller, Cardani actually had to cut weight this season and is having his best year yet.

Halfway through the season, Cardani has steamrolled the competition as he’s 18-0 with 13 pin falls, three technical falls, 94 takedowns, two tournament titles and is ranked No. 2 in Class 2A in the most-recent Illinois Matmen GO EARN IT Wrestling Apparel rankings.

“I think his confidence level from last season to this season has really changed and is obvious,” Mears said. “He wants to go out and take it to anybody who steps on the mat with him. He goes in confident, knows what his game plan is and executes.”

Safe to say that over the past three seasons, Cardani has grown into himself – literally.

“It was hard to give up so much weight when I was younger, but I still had good seasons,” Cardani said. “Now it’s a lot better and I feel a lot stronger than I did as a freshman.”

So far this season, he’s having one of the most dominant seasons in 2A as he’s had just two matches not decided by pin or tech fall.

He continued his solid season at last week’s Lincoln Tournament where Cardani won by fall in 45 seconds and by a 15-0 third-period tech fall before he earned a championship-winning pin at 3:41 over Marengo’s Landen Pfeiffer, who is ranked No. 3 at the weight.

“I think he really sticks to his plan well, and when he’s on the mat he’s one of the smartest kids I’ve ever been around,” Mears said.

Cardani has always been a successful wrestler since he began competing when he was in the first grade.

He won a state title as an eighth grader, and Mears inserted Cardani into the varsity lineup on Day 1 despite the weight differences.

“He has always been my guy,” Mears said.

Last season, Cardani – who competes year-round including in offseason freestyle tournaments – wrestled in his hometown when he qualified for the IHSA State Tournament. At state, he went 0-2 and lost to the eventual state champion in the first round, but his goal this year is to get back and reach the top of the podium.

“Coming into the season, my main goal is to win state,” Cardani said. “It’d be amazing. It’d be unreal, and then I’d have to focus on next year and trying to get another one.”

Being ranked No. 2 in the state has done nothing but fuel him.

“It’s actually really motivating,” Cardani said. “It really makes me want to work harder knowing that there could be someone out there who’s better than me.”

It’s just part of the hard-working attitude that’s made Cardani so great.

“It’s great to be able to coach a kid like him who is so good but also a wonderful young man,” Mears said. “He wants to be coached and takes coaching well from myself, my assistants and his father, who coaches him in the offseason during freestyle.” 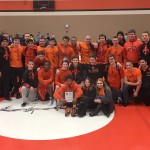