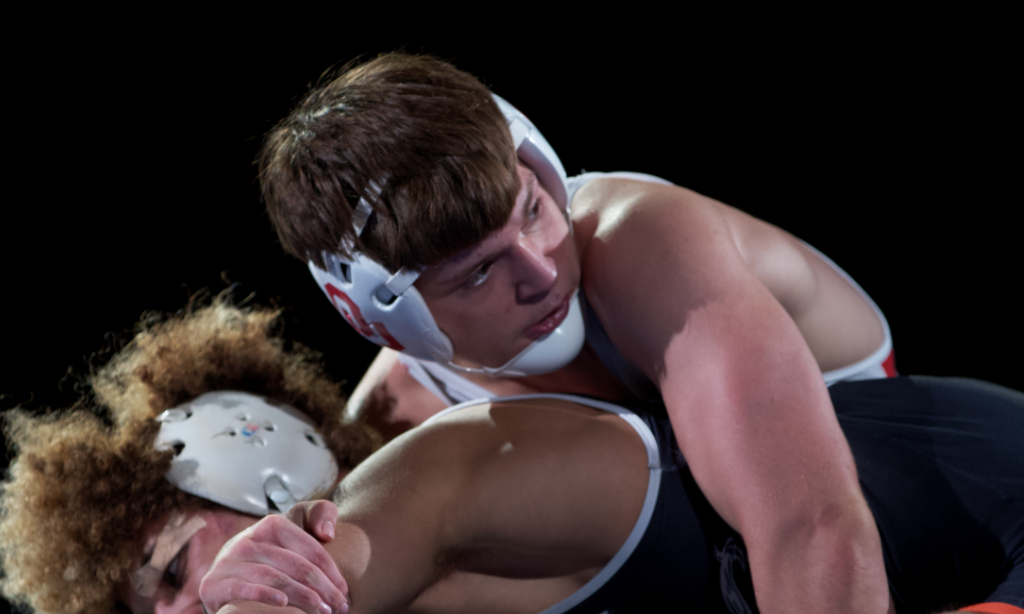 SPRINGFIELD • Conant High School’s last state champion was Jim Kassner winning a title at 215 pounds back in the 2000 season. Twenty-one years later, the Cougars would crown another state champion, this time via a sophomore transfer, Ethan Stiles, who came into the program as an already high-level wrestler and competitor.

As this season has brought on a number of changes for a number of student-athletes, Ethan Stiles was no different. The sophomore had started the school year out of state, and then would find his way back to Illinois.

“I went to Pennsylvania, to Wyoming Seminary,” Stiles explained, “and it was a great, a great environment out there—great partners and great wrestling. Unfortunately, it just didn’t work out there, so I came back looking to win a state title with the Conant Cougars.”

With a strong pedigree of wrestling in his family, Stiles was looking for comfort in his school more than anything else. Last season, while attending Montini Catholic, Stiles placed third at the state championships. This season, after starting the year out of state, and then enrolling in Conant, Stiles had his sights set on something more.

“When Ethan came to us,” Head Coach Chad Hay explained, “we just wanted to make him feel good and make sure he was where he needed to be for his matches. In our room he brings a different perspective—he instantly elevates the level of anyone that he is [wrestling]. He brings in a new energy and it has been great to see the team rally around him.”

And that energy and excitement followed Stiles through his individual Super Regional and Sectional championships, which led him to the Bank of Springfield Center on Saturday for the opportunity he was waiting for.

As the tournament opened, there did not seem to be anything or anyone that was going to stop Stiles’ title run. In his opening match, he would defeat Thomas Schoolman of Stevenson with a 16-1 technical fall in 4:05. In the quarterfinals, however, Stiles would have his most difficult match of the tournament. But it seemed as if it was more conditioning than technique. Still, he would advance with a win over Zach Santo Oswego, but Santo never backed down and he pushed Stiles for six minutes—particularly in the third period where Santo would outscore the soon-to-be-crowned state champion. When the match ended, however, Stiles would hang on for the 13-10 decision, and advance to the semifinals.

With one match separating Stiles and the Grand March, it would take him fifty-eight seconds to work into his first takedown against Grant’s Justin Warmowski. Adding an escape and another takedown in the second period, before two more takedowns in the third, a 9-1 major decision would be the momentum he needed heading into the championship match against the number-one ranked wrestler in the state, Dekalb’s Tommy Curran.

When then match began, Stiles would find his way in on a single leg in just six seconds; however, Curran, who is very strong defensively, fought it off as the wrestlers battled to the edge of the mat. On the edge, Curran tried to roll through the position and Stiles caught him on his back for the first takedown of the match, as well as scoring three more back points in the process. Stiles would take a 5-0 lead just forty-five seconds into the title bout before Curran was able to fight himself off the mat for a fresh start. Stiles would maintain control, and that five-point lead would stand moving into the second period.

Stiles would choose down to open the second period and, almost immediately, Stiles would find his way free and earn an escape point in twenty-eight seconds. Thirty-two seconds later, Stiles would be in on another shot, but Curran would create some great scrambles to fend off the scoring. With seventeen seconds left in the period, Curran would get caught reaching and Stiles would slide into a sweep single to his own right for an easy takedown and a 7-0 lead into the third period.

Tommy Curran would choose neutral to start the final period as he looked to make something happen, but the offense would again come from Stiles with another takedown at the 1:32 mark. Curran would be awarded an escape to bring the match within nine points. Eventually, Curran would find his way in on

Stiles’ legs, but Stiles would fight him off and then score his final takedown of the match to close out his first state championship with a dominant 12-1 major decision.

“Me and [Curran] have history,” Stiles explained. “We both beat each other last year, so I just came into the match knowing that I was going to dominate. I know what it takes to win that match, and that is putting lots of pressure on his head—I knew he would break and that’s what happened.”

As the final whistle blew, Stiles would celebrate his title by tearing off his ankle bands and throwing them into the air while he fired his two hand-loaded pistols shooting them down. “That’s my celebration,” Stiles said, laughing about his gunslinging ability. “I got a little excited—I’m a state champion now—I was just having some fun.”

And, once the official raised his hand in victory, Stiles would give the two-handed ‘broke him’ sign before he would exit the mat in a full sprint, running past his corner, and exiting the arena floor.

In regard to his first state championship and third school, Stiles commented how “I came into this tournament with wonderful coaches who support me. They helped me get ready for this, and they gave me whatever I needed to win my matches—I just love it and I am happy to be a Cougar.”

Stiles and his Conant teammates will have one final competition this season, and that will be on Tuesday for the Illinois 3A Dual Team Championships at Club at Prairie Stone in Hoffman Estates with the Round of 16 beginning at 9:00 a.m. 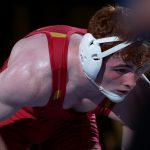 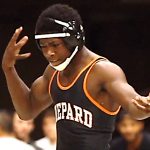