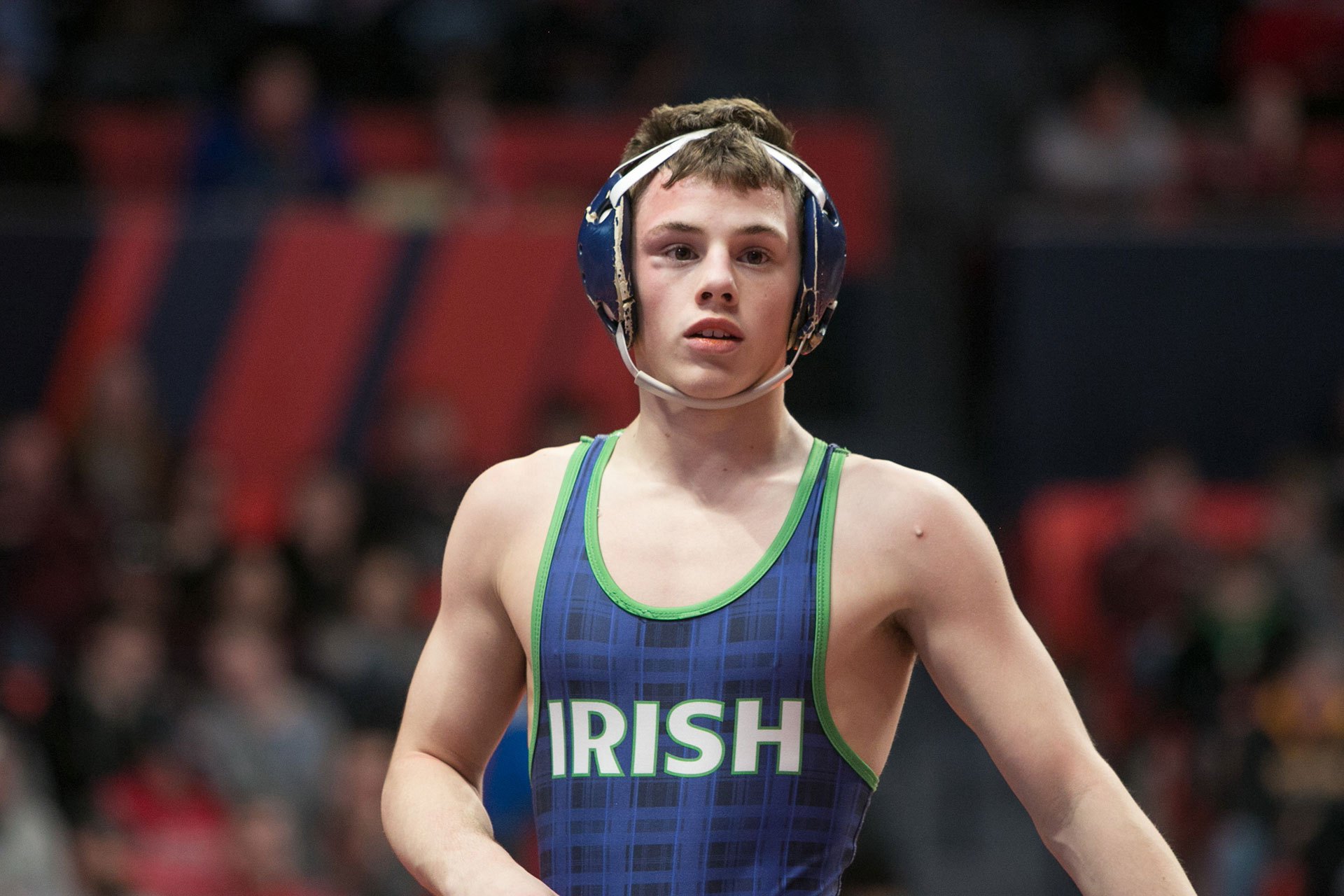 Tristan Daugherty was in for a battle.

As one of three finalists for this week’s FCA Wrestler of the Week award, the 126-pound senior from Peoria Notre Dame went back and forth in the voting with Edwardsville senior heavyweight Lloyd Reynolds. 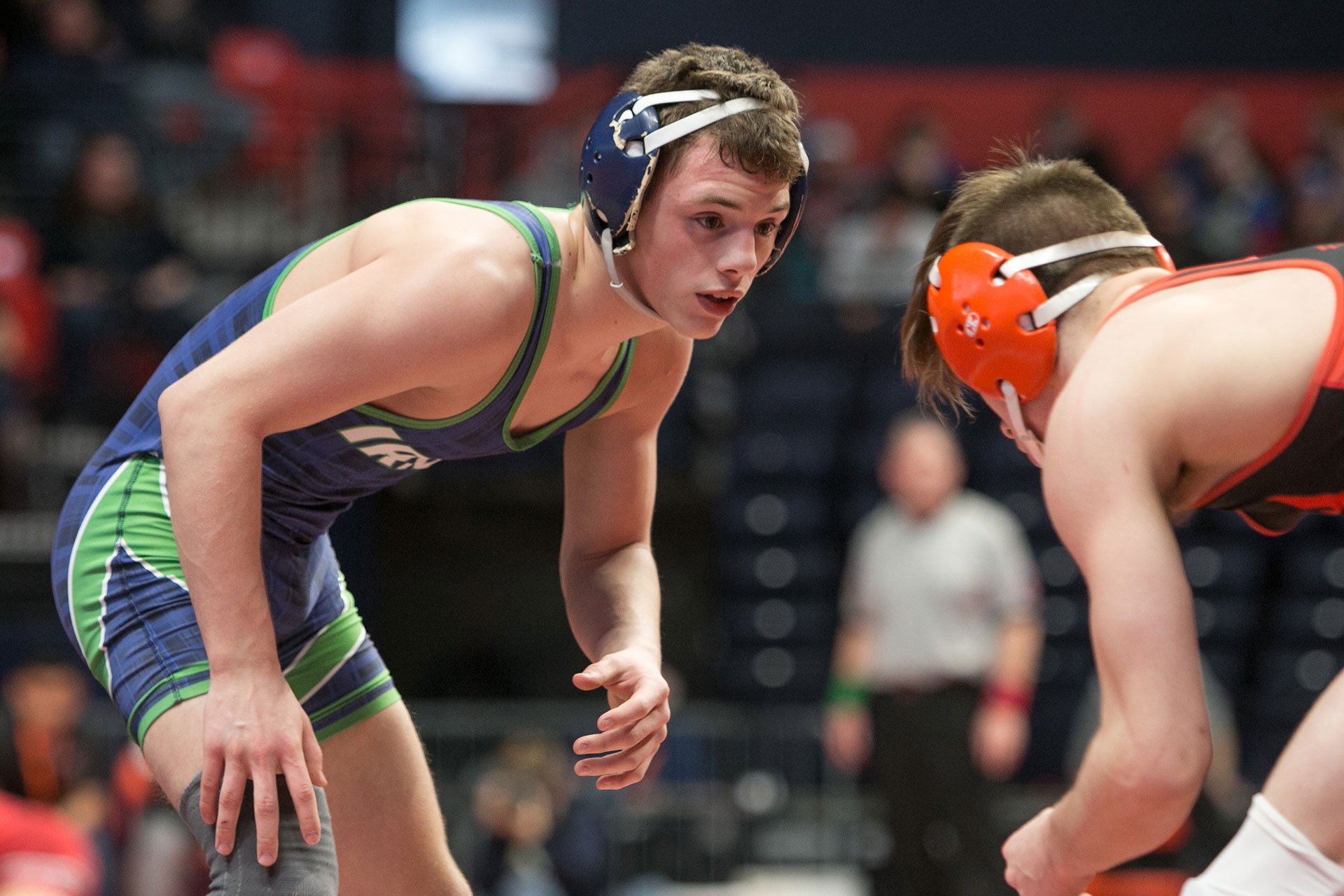 Voting was so close, in fact, that the two were tied with just 32 minutes left in the 28-hour poll.

“Some of my family was keeping me updated with the voting,” said Daugherty, a three-time state place winner. “We were watching it pretty closely the last 20 minutes and we saw that it kept switching back and forth between the both of us. It was pretty cool to watch.”

After Daugherty led by 17 votes with approximately 90 minutes left in the poll, Reynolds surged ahead before the two were tied with exactly 820 votes with 32 minutes to go.

Daugherty regained the lead by the slimmest margin and held only a one-vote advantage in the final minutes.

Luckily, the University of Buffalo recruit held on and ended up winning this week’s FCA Wrestler of the Week award by a mere four votes – the closest poll ever – as Daugherty finished with 832 votes to Reynolds’ 828 votes. 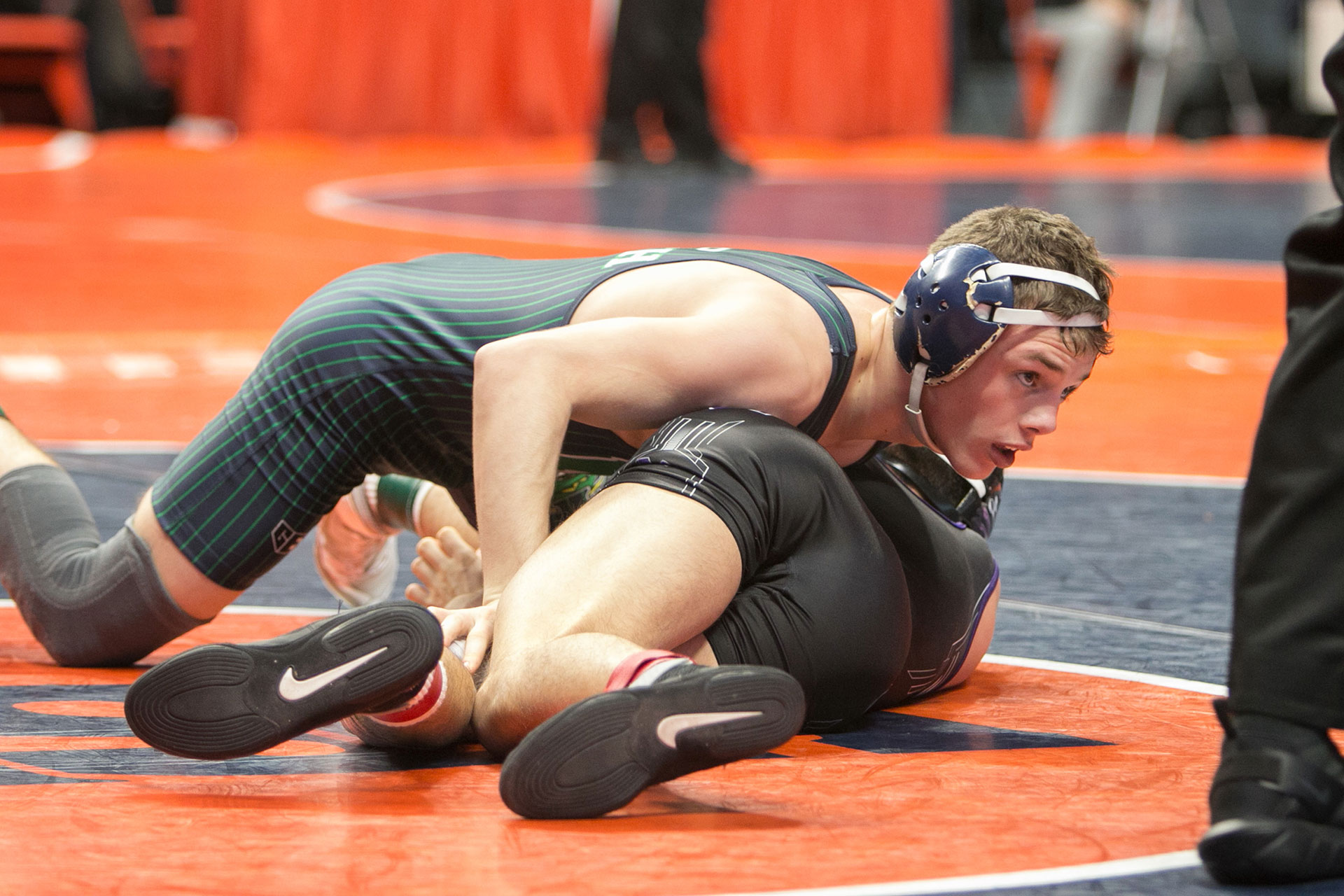 “I was down with about 20 minutes to go, and I didn’t know if I was going to be able to come back from it,” Daugherty said. “I’m not sure how I ended up coming back, but it was cool to see.”

It was a fitting result in Daugherty’s stellar season.

“He’s come so far over the course of the years,” Peoria Notre Dame coach Kevin Burk said. “He started wrestling in our youth program in second grade, so I’ve gotten to see him grow up through grade school and high school. He’s just one of those kids that if you tell him something needs to be done in order to have success, he’s more than willing to do it.” 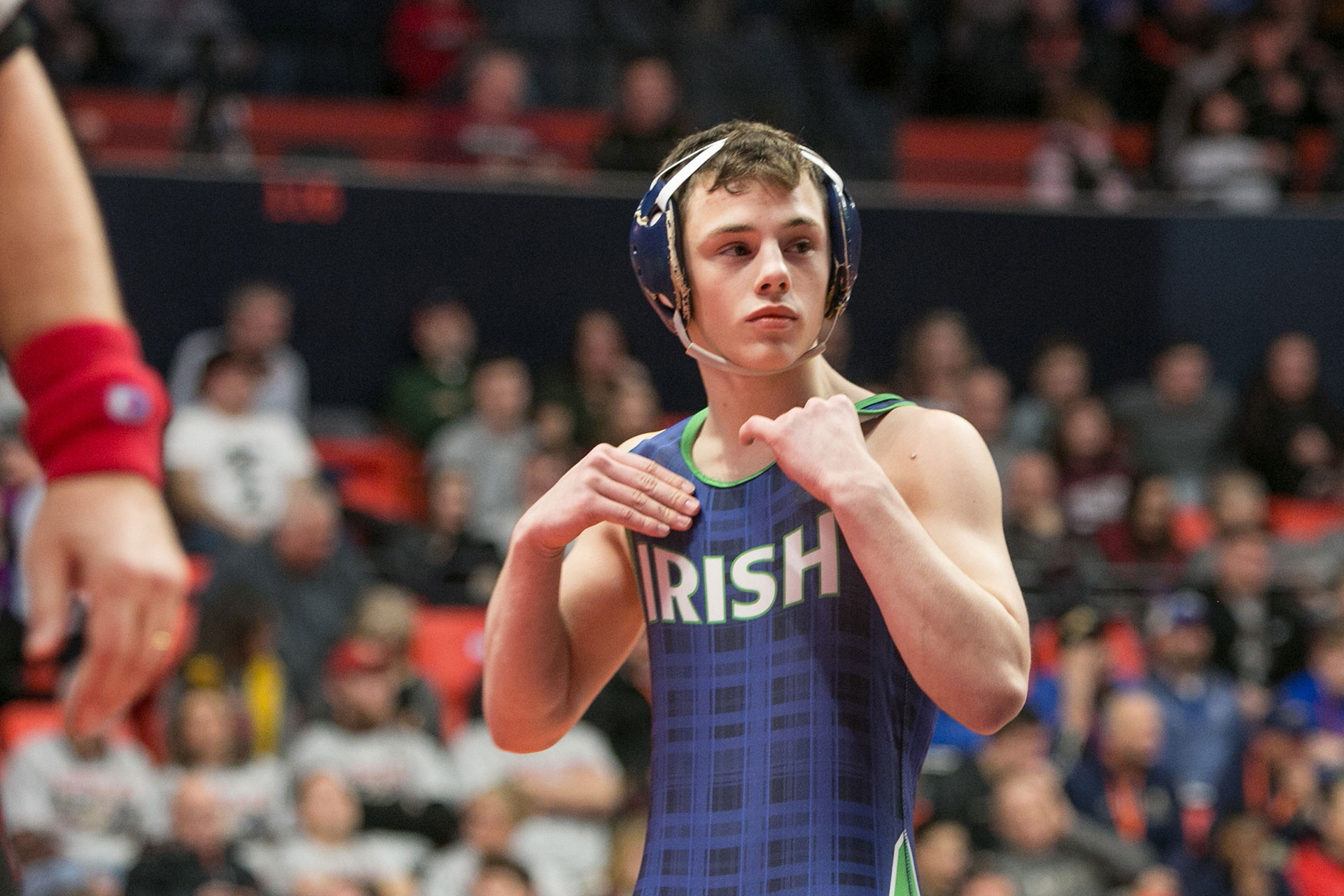 “It was awesome,” Daugherty said. “It’s a record that I’ve been wanting to break since I got into high school. It was neat that I was able to break it at my home school and in front of all the alumni on Alumni Day.”

After an incredible first three years in high school, Daugherty is having his best season yet as he’s currently 35-0 and ranked No. 1 in the current GO EARN IT Class 1A 126-pound rankings.

He does, however, have one big thing left to accomplish.

After he finished third in Class 2A as a freshman and then a sophomore and again a junior, he’s aiming to get over the hump and win an elusive state title as PND has fallen from Class 2A to Class 1A. 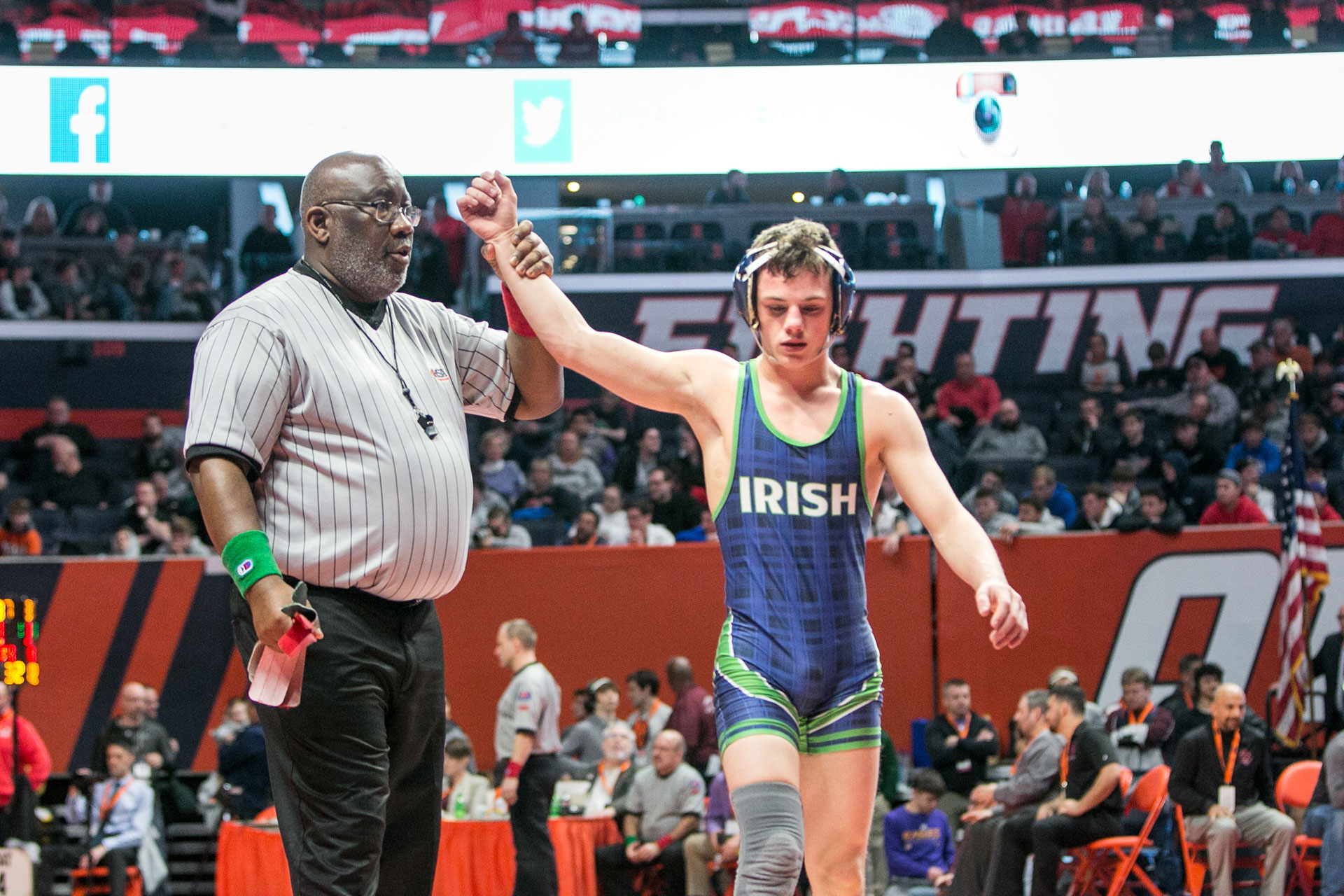 Daugherty and Kevin Burk have been working on improving to help Daugherty breakthrough.

“The biggest thing we’ve been working on after last year is mentally in big matches it felt like sometimes I’d let my opponent wrestle their match and not be where I needed to be,” Daugherty said. “It would end up costing me, so all season it’s been the biggest concern. We’ve really focused on making sure I’m ready for every match and making sure that no matter how good an opponent is that I still going out there and wrestle as hard as I can.” 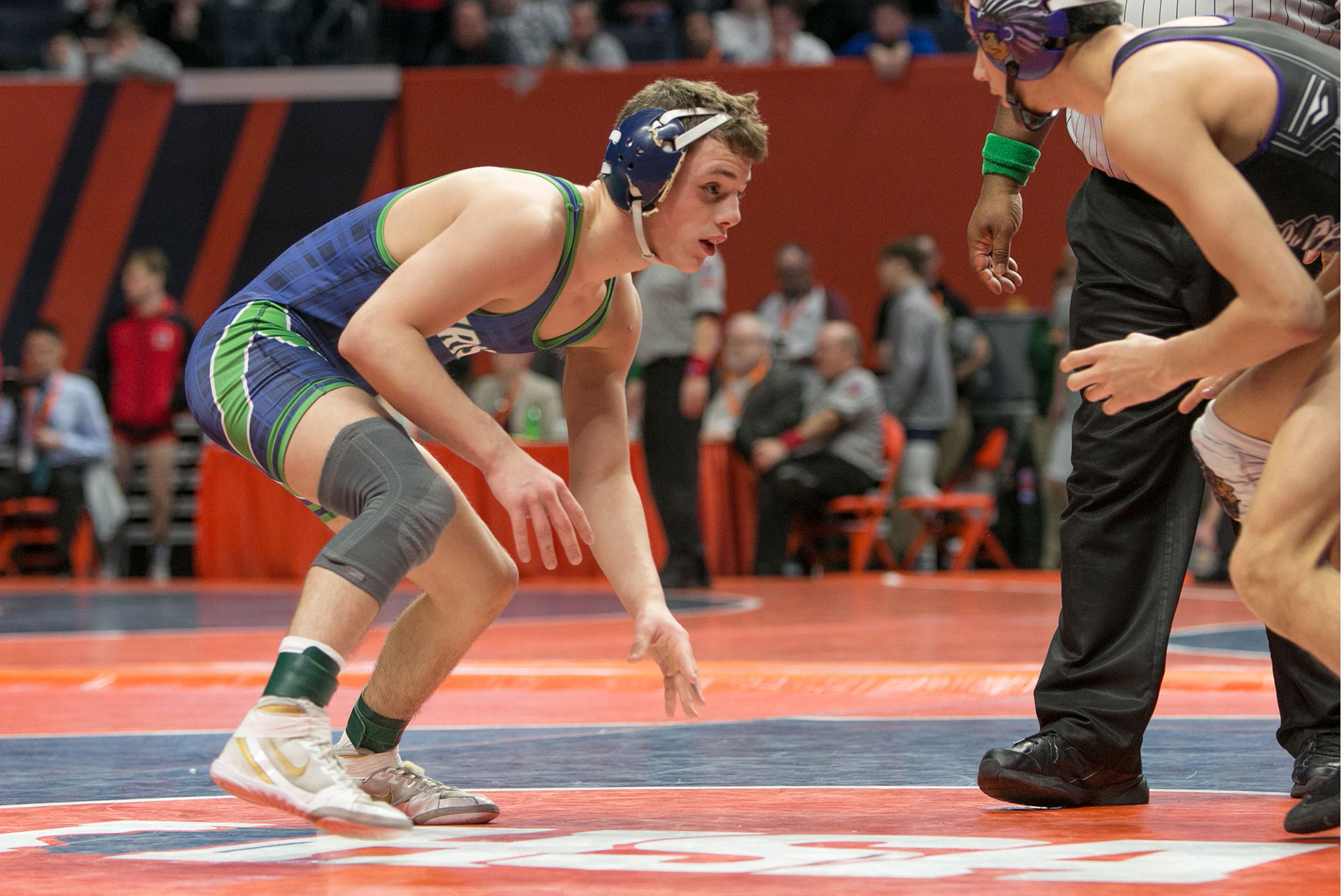 “I tend to get emotional when I talk about him because he’s meant so much,” said Kevin Burk, fighting back tears. “Obviously, winning a state championship would be tremendous, but after seeing everything he’s done just to give himself this chance is just as important to me. But if he can walk off that mat as champion… It’d mean a lot.”