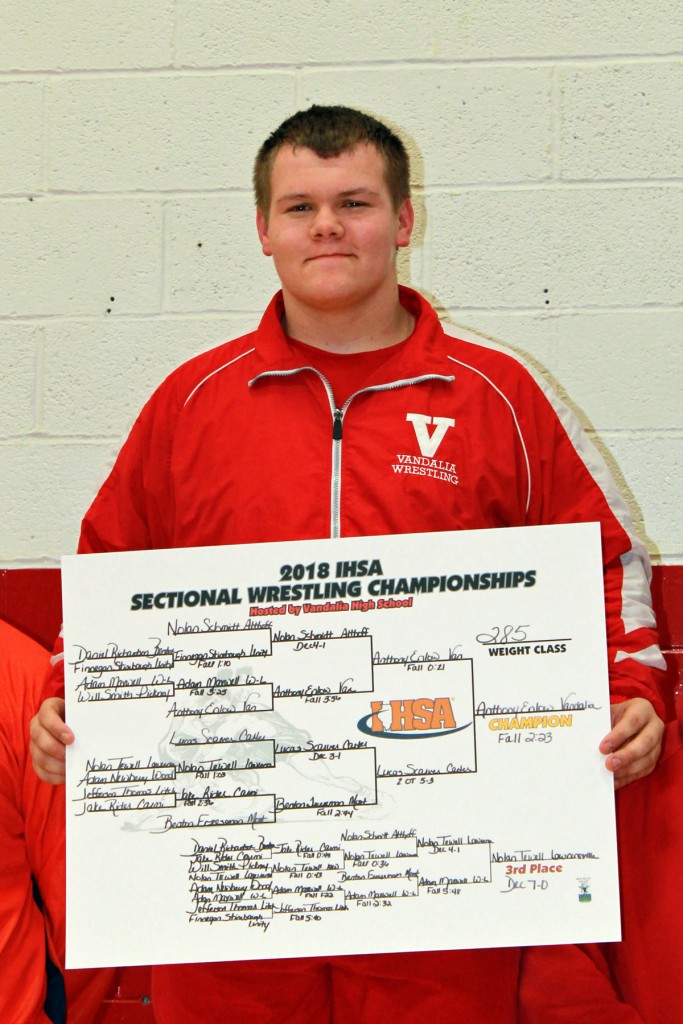 GO EARN IT Wrestler of the Week: Anthony Enlow aiming to cap off season with a state title

History repeated itself once for Anthony Enlow.

Now the 285-pound Vandalia junior is hoping that history doesn’t repeat itself twice.

At last year’s Litchfield Invitational, Enlow defeated Orion’s Logan Lee in the semifinals and then topped Lena-Winslow/Stockton’s Ian Kuehl in the finals to win the tournament title, but Enlow wasn’t able to continue the momentum and finish off his spectacular season with a state title.

He’s hoping this year is different.

At this year’s Litchfield Invitational on Saturday, Enlow – ranked No. 3 in the current 1A 285 GO EARN IT Illinois Matmen rankings – once again defeated No. 2-ranked Lee in the semifinals and once again topped No. 1-ranked Kuehl in the finals.

This time, he’s aiming to cap it off with a state title.

“Going into the tournament, I knew it’d be the exact same thing this year because that’s how we’re ranked (on Matmen),” Enlow said. “Hopefully, with this momentum that I gave myself, it’ll allow me to do even better in the postseason.”

For his performance last week, Enlow is this week’s GO EARN IT Wrestler of the Week. He’s first Class 1A wrestler to win the award this season.

“He had a great tournament and a great run,” Vandalia coach Jason Clay said. “It was a great confidence builder going into the postseason. He’s a confident kid, but if you beat two state champions in the same day it does a lot for you.”

Enlow’s semifinal match with Lee was a rematch of the 285-pound championship match at the Princeton Invitational earlier this month.

Lee prevailed at the PIT, but this time Enlow extracted revenge with a 3-2 decision.

“I wrestled (Lee) at Princeton,” Enlow said, “so I knew what I had to do to beat him, and I worked on it all week.”

In the finals against Kuehl, Enlow continued his surge as he had a five-point move to propel him to a 5-2 decision.

“With Kuehl, I had not seen him this year, but I knew the basis of what he does,” Enlow said. “I knew I just had to execute.”

An IKWF state champion as an eighth-grader and a two-time state qualifier in high school, Enlow placed third last year after he fell in the semifinals.

This year, he’s hoping to be atop the podium.

“It was heartbreaking losing in the state semifinals,” Enlow said. “It wasn’t what I planned to do – I planned to win it all – but it was definitely a motivator. I knew I had two more years to accomplish my mission.

“If I could win this year, it’d mean a lot to me and a lot to my hometown.”

Enlow has done a lot of work and preparation to achieve his goal.

“He’s always had high goals for himself and has really improved his body a lot,” Clay said. “He was a kid who came into high school and knew maybe one thing on his feet, one thing on the mat and one thing on top. Now he’s expanded his reach and his knowledge a lot. He’s always been a big kid, but he’s really filled out. He’s really been working hard at it and has really learned more techniques and has more confidence.”