Due to some unexpected surgery and recovery time for the site admin, we are going to do things a little differently this week. We will accept nominations until 8am Tuesday morning at which time the Illinois Matmen staff will pick a winner rather than taking a vote. 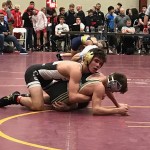