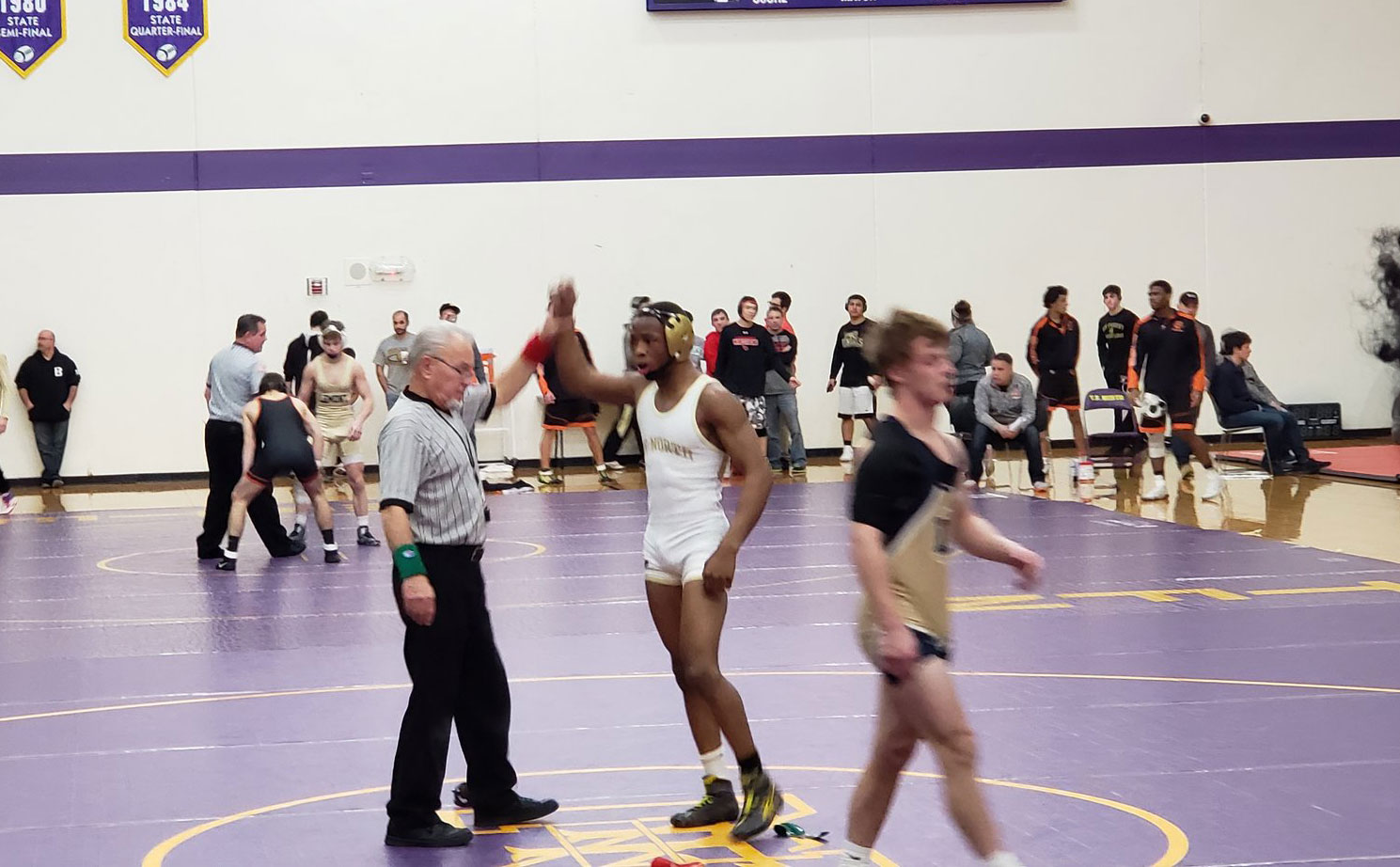 Sincere Bailey had no idea.

When the Thornton Factional North sophomore showed up at a practice earlier this week, a Meteor coach informed the 132/138-pound grappler that he was a finalist for this week’s GO EARN IT Wrestler of the Week award.

“My coach told me, ‘Congratulations on being nominated,’” Bailey said. “I said, ‘Huh?’”

Turns out, it was news to him.

After a standout last two weeks, Bailey was selected as one of four finalists for the weekly award.

During the past two weeks, the returning state place winner defeated both Lemont’s Kyle Schickel (#3 in 2A 138) in a dual meet and then Providence’s Josh Ramos (#3 in 3A 138) en route to his Geneseo title at 138.

He followed up last weekend by winning a 132-pound South Suburban Conference title with a 17-1 technical fall of Lemont’s Drew Nash (#4 in 2A 132) in the finals.

For his showing at the SSC, he received the Jim Craig Award as the most outstanding wrestler of the conference and was also voted as this week’s GO EARN IT Wrestler of the Week.

“The past couple of weeks, he seems a little more motivated and has been pushing himself extra hard,” TF North coach Tim Kirkwood said. “I talk to the kids about how the second half of the season is the time to turn it up, and he’s stepped up. He doesn’t care who’s in front of him. He’s just going to wrestle.”

Bailey is actually the second member of his family to win the award as his older brother, Bilal – now a 152-pound junior at TF North – claimed the honor last season.

In fact, Bilal actually won the award last year in the exact same week of the season that Sincere won this year.

“My brother, out of all the wrestlers I know, he’s my idol,” Sincere said. “I look up to him as a wrestler.”

Just like his brother, Sincere is making quite the name for himself.

Currently 24-1, his lone loss this season came at the Dvorak and he’s ranked No. 1 in the current Illinois Matmen GO EARN IT rankings – ahead of a returning state champion.

None of it matters to him, however, as Sincere is looking to complete some unfinished family business.

“It was a pretty devastating day for us,” Sincere said. “When it comes to state, we usually bring it home, so coming up short was pretty disappointing. But it did fuel us this year.”

If either were to capture a title, it’d be the first state title for a TF North wrestler in 51 years.

“If I were to bring a state championship home, it’d make my whole season – make my whole year,” said Sincere, who’s still unsure if he’ll wrestle at 132 or 138 in the postseason. “It’s pretty much why I wake up in the morning. Why I go run. Why I go to practice and work out after that. It is a big deal to me.”

After he found out that he was a finalist for the award, Sincere campaigned for himself amongst his friends and family. His parents also told everyone they knew, while TF North also showed its support as it spread the message throughout the school – including over the PA system – and with its youth wrestling program.

It helped Sincere notch one more victory this season.

“For both the Bailey brothers, they don’t dwell on things like this, but I know this is big – really big,” Kirkwood said. “Deep down inside, they want to celebrate, but they’re trying their hardest to stay focus.

“As a coach, it’s been a pleasure for me to have them. They’ve really helped to put the school and the program on the map.”