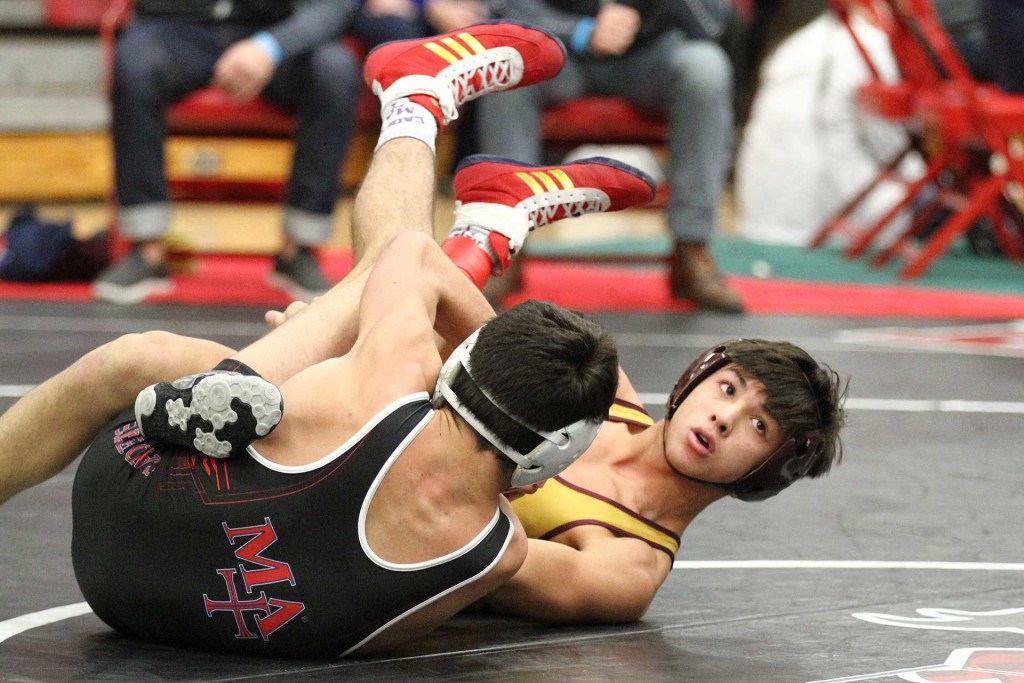 All are things Lockport 120-pound senior Matt Ramos conquered in the offseason or so far this season.

Winning the first GO EARN IT Wrestler of the Week of the season? Well, that’s a different story.

After a red-hot start to his senior season, the only loss the University of Minnesota recruit has suffered this year was in last week’s Wrestler of the Week poll.

“Yeah,” Ramos said painfully. “Everyone was giving me a hard time for that.”

Turns out, the loss didn’t last for long.

After yet another standout week, Ramos bounced back on the mat and in the poll as, in his second straight week being nominated, he claimed the season’s second GO EARN IT Wrestler of the Week honor.

“When I won, I thought, ‘Sweet, I won. Finally,’” Ramos joked. “The first time I put it up on social media and tried to get people to vote for me, but this time I just let it be. When I got home and saw the results, I was like, ‘Dang, I won.’”

After the weekend he had last Saturday, Ramos deserved the honor award.

He followed an Outstanding Wrestler performance at the Barrington tournament in the opening weekend of the season by beating returning 3A state champion Jake Rundell of Oak Park-River Forest and returning 2A state runner-up Joey Cape of Washington at the Washington Super Duals on Saturday.

His performance and voting support helped him claim this week’s award.

“We were joking with Matt that he was probably going to lose the nomination again,” Lockport coach Jake Oster said. “Our student marketing class does an athlete feature every week, too, and for wrestling I throw out a couple of kids who I think had a good week and the class votes on it. Well, Matt lost both of those votes, too, so I’m glad he won this. He’s a great kid who deserves it.”

A great kid who’s off to a great start to his season.

He’s 8-0 and ranked No. 1 on Illinois Matmen’s current 3A 120-pound rankings as he and the Porters head into this weekend’s Walsh Jesuit Ironman in Cuyahoga Falls, Ohio.

“I expect Matt to go out and compete in every match,” Oster said. “When he does that, he’s always tough to beat. With him, I know that I can always expect him to go out and wrestle as hard as he can and be prepared for every match. When you do those things, you tend to win a lot and he has been fortunate enough to do just that.”

Ramos’ strong start to the season is an extension of his outstanding summer.

After he lost last winter in the 3A 113-pound quarterfinals to eventual state champion Dylan Ragusin from Montini, Ramos took his training and game to the next level.

In the summer, he won the U.S. Cadet Freestyle Team Trials in Akron. After a few weeks training at the Olympic Training Center in Colorado Springs, he competed in Croatia where he won the Cadet World Freestyle championship.

“Not winning a state championship made me want to keep pushing in the offseason,” Ramos said. “Every time I lose, I try to determine what I can work on to make that not happen again, and that’s really what I focused on all offseason. I worked a lot on my explosiveness.”

He was the only American to win a world title.

“The running joke between him and (teammate and defending state champion Anthony) Molton is that Matt can win a world title, but he can’t win a state title like Molton did,” Oster joked. “Anthony is holding that over his head right now.”

Ramos is hoping to continue his success deep into February. A two-time state place winner, he’s hoping to breakthrough in Champaign.

“This season, I really want to dominate all of my matches, win a state title and hopefully win at the Ironman,” Ramos said. “I’d also love to win an NCAA title one day and, if I train hard enough, make the Olympics and win a gold medal some day.”