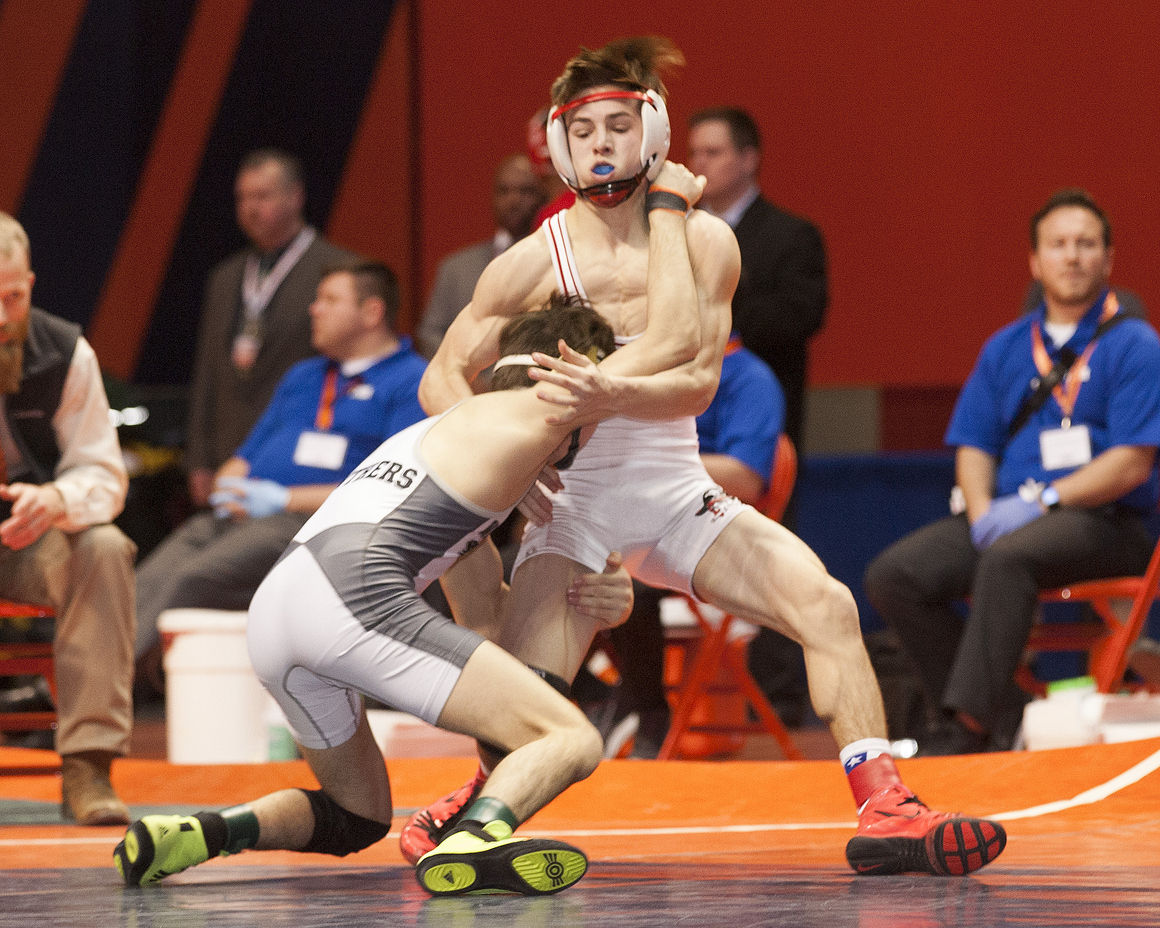 When Micah Krueger first encouraged Ethan Harsted to give wrestling a try, the then six-year-old Harsted didn’t exactly know what to expect.

“When I first heard ‘Wrestling,’ I was like, ‘Will I get hurt, and do I hit anyone?’” Harsted recalls. “I was thinking of body slams, leg drops and elbows. I was so confused.”

When Harsted arrived at his first-ever practice, what he discovered altered his and Krueger’s lives.

More than a decade later and now veteran members of the regional-champion Ottawa wrestling team, the Pirate pair has become two of the state’s best Class 2A wrestlers, fierce practice partners and close friends.

“I think part of the reason why we’ve both had the success that we’ve had is because we’ve pushed each other throughout the years,” Krueger said. “We’ve been wrestling against each other in practice for 12 years and we really push each other and have helped each other get to where we are.

“It doesn’t happen without each other.”

After both were state medalists last season, each has taken his skill to the next level this winter.

After Harsted finished second in Class 2A 113 pounds last season, the now 126-pound junior is currently 30-2, a 2A Plano Regional champion and ranked No. 1 at his weight in the current Illinois Matmen GO EARN IT Wrestling Apparel rankings.

The 132-pound senior Krueger, who placed sixth at 2A 132 last season, is 33-1 – the lone lose being an injury default – and ranked No. 6 at his weight after he also won a 2A Plano Regional title.

“We’re like brothers,” Harsted said. “We grew up together, and our parents are really close. I wouldn’t be where I am right now if it wasn’t for Micah or his dad.”

Where they are is chasing state titles.

After Harsted came close last season, both want to finish the job this year and become Ottawa’s first-ever state champion.

However, thanks to their competitive relationship, each wants to do it before the other.

“I joked with him, ‘I hope that you win a state title this year, but I hope that the state finals start at 132 so that I can win it first,’” Krueger joked. “Unfortunately, it’s 152 so he’ll hopefully get it first and, if there’s anybody who I’d be happy for to win a state title before me, it’d be him.”

Over the years, however, their relationship hasn’t always been so hospitable.

“Since I’ve been six years old, we’ve been practicing against each other and a few times we’ve almost gotten into fist fights,” Harsted said. “He always seems to get the better of me. I get in deep on a shot and think, ‘I’m going to finish this,’ but, somehow, he’ll gain control and I’ll get so mad.

“I haven’t had a huge blow up this year and he hasn’t either, but last year we had a few.”

The competitiveness has also spilled into tournaments where the tandem has tried to outdo each other by seeing who can advance the farthest or who can have the most pins.

“We were at a tournament one time and Micah had a really fast pin, so he comes up to me and says, ‘I think I’m going to get the fastest pin,’” Harsted said. “He told me, ‘Try to pin all your opponents and we’ll see who can wrestle the least amount of time.

“Well, he ended up getting beat so I had to rub it in, and he got so mad. It was pretty funny.”

Despite their feisty relationship, both are pushing each other in their quest for a state title.

“I’m rooting a little more for him to win a title than me because it’s his senior year and it’d be amazing to have him win a state title,” Harsted said. “I obviously want to win a state title myself, but I want him to succeed, too.”

Krueger thinks Harsted will win a title before before Harsted graduates.

“He’s so good that I wouldn’t be surprised if he wins this year,” Krueger said. “After he gets another year under his belt and gets even more fine-tuning of technique, good luck to everybody else in the state. I feel bad for you.”

The one lingering question that remains to be determined is between the two – who are just a weight apart – who would win in a match?

“I’ve always been bigger so that helps and, for whatever reason, I seem to have his number,” Krueger said. “Sometimes, he comes pretty close to winning (in practice), so we’ve had some great battles. It’d be a great match and I’d love to see it.”

“Hands down, it’d be Micah,” Harsted said. “He’s gotten into my head ever since I was six years old. Every once in awhile, I’ll catch him and take him to his back, but it’s one time out of 10.

“Even if we were at the same weight and the same body build, he’d beat me hands down.”