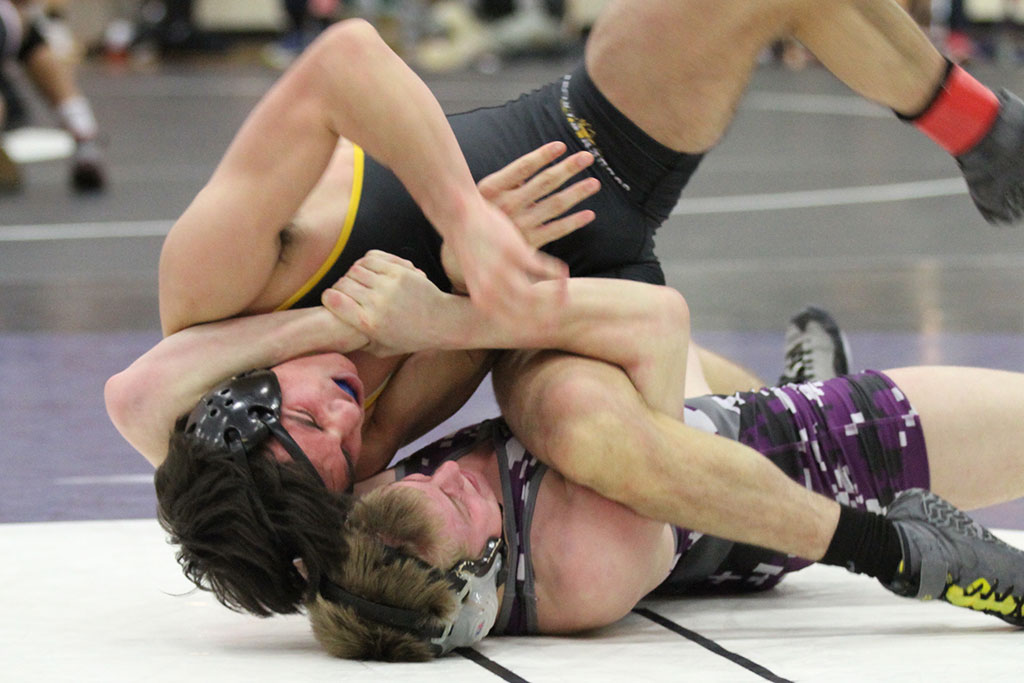 Flat on his back and wincing in pain with cramps in both of his calves, Hampshire’s Casey Allen had to wonder if dropping 14 pounds so he could wrestle at 132 pounds was worth it.

He got his answer when the third period ended, and his hand was raised as a 2016 Fox Valley Conference champion, thanks to a 7-3 decision over Jacobs’ David Dudych.

Allen literally spent the whole third period against Dudych without a good leg to stand on.

“That was difficult,” Allen said. “I just tried to tough it out in the third period and be stronger than (Dudych). This feels great. I’m only a sophomore and hopefully I can come here and do this the next two years.”

Individual champions from nine different schools scaled the highest step of the awards stand in Hampshire on Saturday, at this year’s 13-team FVC meet. When it was over, Huntley crowned the most individual title-winners and in the process won its first team conference title in program history.

Huntley trailed Crystal Lake Central by two team points heading into the final match of the tournament, which pitted Swanson against Dereck Pearson of Prairie Ridge.

Top-seeded Swanson came out on the good end of a scramble to pin Pearson at the 1:26 mark of the first period, and give his team a 194-190 edge over Central.

“He wasn’t totally balanced and I just rolled him through,” Swanson said. “Last year I used to throw a lot of kids on top of me and I’d get stuck but this year I’m a lot better on my throws and my offense, and I’m getting up from the bottom.”

Swanson knew he needed a win to give Huntley the team title.

“I just told him to go wrestle and win, and he did,” Huntley coach BJ Bertelsman said. “I wasn’t going to tell him that the conference title depended on it, but he knows that and he’s fine with that kind of pressure.”

Third-seeded freshman Kosowski pinned second-seeded Matt Guiterrez of McHenry in the semi’s at 106 before winning a 12-11 title-mat decision over top-seeded Jace Sparks of Prairie Ridge.

Top-seeded Stenger had two tech fall wins and a pin in winning the title at 120, one year after placing second at 113.

Afterwards, Stenger spoke to the importance of confidence heading into Saturday’s regional weekend.

“It helps to have my teammates out there supporting me and these past few months have been really good for me,” Stenger said. “Winning (tournaments) at Granite City, Sycamore, and now this – it’s a really big confident booster going into the regional. This is definitely where I want to be right now.”

Huntley won nine of 13 place matches in the final round to clinch the team title. Petros Mihalopoulos placed second at 195 and the Red Raiders got thirds from Zach Spencer (113), Joey Armijo (126), and Brad Zbilski (152).

Top-seeded Parks won 7-2 over Jacobs’ Jack Golnick on the title mat, and top-seeded Petersen improved to 32-4 with his 10-2 decision win over Jacobs’ Chris Dranka.

Where Hampshire’s Casey Allen battled the effects of cutting weight on Saturday, Petersen believes he’s benefiting from wrestling at his perfect weight.

“Last year I was cutting some weight and this year I’m at my walking-around weight. I can eat more, practice harder, and I’m better now that I can focus on my wrestling and not worry about my diet,” Petersen said.

Harrier got a third-period takedown and rode out Grayslake North’s Joseph Arroyo to win an 8-4 title-mat decision.

“This is kind of like a practice tournament for everyone, going into regionals next week, so it’s good to get good competition right now.”

Lane won his first FVC title via 5-0 decision against Woodstock’s Kevin Zange, and didn’t give up a single offensive point in three matches.

“I was fifth here last year and this feels great. I’ve worked so hard for this in the offseason,” Lane said. “The whole team has worked extra hard this year. We haven’t lost a dual meet and we work hard in the practice room. The coaches kill us.”

After reversing Fiorito early in the third period, Allen again took to riding, all the way to the final buzzer and a 6-1 decision win.

“Riding has always been the best part of my wrestling,” Allen said. “I didn’t have a great shot last year so I’ve dedicated a lot of time since then getting better on my feet, and bottom is all about attitude.

“I feel great, a hundred times better than last year. I know who’s at the regional and the guy that gave me one of my two losses will be there – George Strang of Kaneland. He’s very tough but I wasn’t a hundred percent the first time we wrestled and I’d love to wrestle him again.”

Only two wrestlers left Hampshire with unbeaten records, and both are top-ranked by Illinois Matmen in their respective classes: Travis Piotrowski of Prairie Ridge, and Christian Brunner of Dundee-Crown.

Piotrowski used two pins and a major decision win on the title mat to win his fourth FVC title, and improve his record to 31-0 at 126 pounds.

“I’m definitely where I want to be at,” Piotrowski said. “I don’t even call it a peak. I’m just training as hard as I can. I’ll never reach my peak and I’ll keep trying to push through it and train harder every single day.”

Piotrowski lost a 9-8 decision in a Class 2A state semifinal last year before wrestling back to place third at 120 pounds. Piotrowski placed third in Illinois at 106 his freshman year.

The unbeaten, top-ranked senior has his eye fixed firmly on the top of the awards stand in Champaign this year.

Brunner (38-0) placed second in Illinois at 182 as a sophomore, and placed third at 195 last season. He pinned all three of his opponents during the two-day FVC tournament, capped by a second-period fall against Huntley’s Mihalopolous on the title mat.

Brunner has been an exceptional mat wrestler during his high school career, and has worked hard to develop his shots. He used takedowns and back points to build a 13-2 lead in Saturday’s title match before winning by fall.

“I’ve wrestled a lot over the summer and I’ve worked hard to get better on my feet,” Brunner said.

Brunner has also pinned 31 of his 38 opponents this season but the unbeaten senior isn’t looking past anyone in his pursuit of a state title.

“I want to know who I’m going against at the regional because sometimes you can take someone lightly but at the end of the day I have to wrestle no matter who steps out there,” Brunner said. 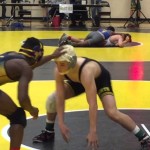