MADISON, WIS.— In a match that the Orange and Blue trailed for most of the afternoon, Coach Heffernan’s grapplers showed great resolve in fighting back. Trailing 13-8, the Illini swept the final four bouts of match to defeat the Badgers 21-13. Zane Richards notched his 20th straight win to start the season, while Martinez got back on track with his 12th technical fall of the season. The victory improves the Illini to 2-4 in the Big Ten, while the Badgers drop to 0-4.

“As a team we were pretty solid but need to keep improving,” explained Head Coach Jim Heffernan. “There are still a bunch of things we need to improve on.”

Johnny Jimenez started the match off for the Badgers with an early take down and a two=point near-fall that had him leading Francis Edelen 4-0. The Badger freshman stretched his lead out in the second period with another near fall, this time holding it for the full four points. In the third period, Jimenez added two more takedowns to his his score to complete his day, defeating Edelen by major decision 13-3.

The most intense match of the day came at 133 pounds, where #2 Zane Richards battled 2015 All-American Ryan Taylor. The match was a scramble that went back-and-forth for the full seven minutes, with both grapplers controlling parts of the bout. Richards started off strong with a takedown and escape point to lead 3-1 early on in the second period. Taylor responded with a takedown of his own in the second period to knot the duo at three-a-piece. An exchange of escapes, first by Richards and then by Taylor, held the tie at 4-4 through the match’s final seconds. However, the Fighting Illini junior’s ability to control Taylor for an extended portion of the bout earned him a riding-time point to overcome Taylor, 5-4. The win was Richards’ 20th of the season, and his fifth over a ranked Big Ten opponent.

“Zane’s looked good all year,” said Coach Heffernan. “He’s been consistent, he’s matured and is making good decisions. That was a very good win against a really good opponent.”

The Wisconsin Badgers netted their largest lead of the afternoon after consecutive wins at 141 pounds and 149 pounds. Luke Rowh got the Badgers back in the win column with a victory in a defensive struggle against Mousa Jodeh, filling in for injured Brock Ervin. Jodeh battled Rowh tough, allowing only one takedown, but Rowh controlled the match throughout and earned a riding-time point to cement his 4-2 decision. At 149 pounds, Illinois’ Kyle Langenderfer stayed close throughout the seven minutes, but Andrew Crone kept him at arm’s length. In the end, Crone led wire to wire to claim an 8-6 decision over the Illini’s red-shirt sophomore.

With the Orange and Blue trailing 10-3 after four bouts, Isaiah Martinez returned to the mat for the first time since having his 54-match winning streak snapped. The second-ranked wrestler at 157 pounds wasted no time in getting back on track with two four-point near falls in the first period, leading T.J. Ruschell 10-0. From there, Martinez tacked on three more takedowns to finish off Ruschell with a 16-1 technical fall. The technical fall pushed his NCAA-leading total out to 12, surpassing his total from last season.

After Martinez cut the lead down to two before intermission, #3 Isaac Jordan and #4 Steven Rodrigues battled at 165-pounds with the team lead at stake. Entering the match, a perfect 15-0, Jordan started the bout off with an early takedown. After the duo exchanged escapes, Jordan used a second takedown to stretch the lead out to its largest of the day, 5-1 after five minutes. Although Rodrigues managed another escape to shrink the lead, third-ranked Isaac Jordan proved too tough for the Illini senior this afternoon, winning the bout 5-2 and pushing the Badger lead back out to 13-8.

Trailing the Badgers through the first six bouts this afternoon, the Fighting Illini pulled within one of Wisconsin at 174 pounds. Zac Brunson used a takedown and four-point near fall in period one to put Wisconsin’s Liegal on his heels. Liegal rebounded in period two, only allowing Brunson an escape during the two minutes but still trailed 7-0. Brunson returned to his offense in the final period, netting six more points, and only conceding two escape points, to finish off Liegal 13-2.

Looking to forge ahead of Wisconsin for the first time on the afternoon, #16 Jeff Koepke faced off against Ryan Christensen at 184 pounds. Koepke started the Illini off with a takedown in period one, but after a Christensen escape the duo remained in stalemate through the period’s final minutes. Koepke kept the pressure on the Badger with a reversal in period two to lead 4-1. The senior finalized the victory with two more takedowns in period three en route to a 9-3 decision.

Looking to put the Badgers away and all, but cement, an Illini victory, Andre Lee got off to a fast start with a takedown of Wisconsin’s Eric Peissig in the match’s opening minute. After an escape by Peissig, Lee got back to work and took the red-shirt sophomore down to the mat again to lead 4-2 after the opening three minutes. Adding on three more points in the final frame, Lee cemented his first victory of 2016. a7-2 decision.

“Andre’s good and will continue to figure things out with experience,” said Heffernan. “He showed a lot of offense today which is good to see. He needs to be offensive to have success.”

With a five-point cushion for the Illini entering the heavyweight bout, Brooks Black extinguished any remaining doubt with a victory over opponent Brock Horwath. After deadlock in period one, Black escaped to start period two and then took down Horwath to lead 3-0. Horwath managed two escapes in the final three minutes of action, but couldn’t overcome Black’s early lead. Brooks Black’s 4-2 decision finalized a 21-13 victory for the Illini, and gave Black his 15th win of the season.

After just two matches in a two-week span, the Orange and Blue will wrestle twice next weekend. On Friday, February 5, the Illini will battle the Huskers of Nebraska in Lincoln in their final road dual of the season. After battling the tenth-ranked Huskers, the Fighting Illini return home to face Northwestern at Huff Hall on Sunday, February 7 at 1 p.m. For complete coverage of both matches, visit fightingillini.com and follow @IlliniWrestling on Twitter. 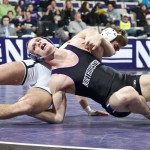 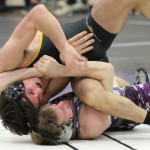