CHAMPAIGN, Ill. – No. 15 Illinois wrestling pushed past Michigan State with an 18-12 victory Friday night at Huff Hall. With the score tied at 12-12 heading into the final two bouts, redshirt sophomore Matt Wroblewski (197) and freshman Luke Luffman (285) were able to pick up wins in the final matches to give Illinois the dual win. The Illini also saw wins on Friday night from senior Travis Piotrowski (133), redshirt junior Dylan Duncan (141), redshirt freshman Danny Braunagel (165) and redshirt senior Joey Gunther (174). Illinois is now 6-3 on the season, 3-2 in Big Ten Duals, and still undefeated at Huff Hall at 4-0.

“It was an ugly win,” said head coach Jim Heffernan. “Gunther and Wroblewski both showed real guts in their wins. We looked flat at some weights and need to get off bottom at others. Back to practice tomorrow to get ready for Sunday.”

Senior Travis Piotrowski got Illinois on the board with a win over Garrett Pepple in the 133-pound bout. Piotrowski was sharp in the first period, getting two for a takedown and turning Pepple for a four-point nearfall. Piotrowski would get the riding time point, and win the match in a 7-3 decision. Ranked seventh nationally by FloWrestling, Piotrowski is now 18-2 on the season, including 9-0 in dual bouts.

Redshirt sophomore Dylan Duncan followed up with a win at 141-pounds to put Illinois in front. Taking on Matt Santos, Duncan picked up a takedown late in the second period that would prove to be the difference. Duncan, ranked 12th nationally at 141, would take a 3-2 decision, which pushes his record this season to 14-6.

Redshirt freshman Danny Braunagel was in control in his 165-pound matchup with Drew Hughes. The 15th-ranked wrestler in the nation at 165, Braunagel picked up two takedowns in both the first and second periods on his way to a 9-2 decision over Hughes. Braunagel is now 17-5 this season, and 4-1 in Big Ten matchups.

After Braunagel’s win, the dual score was tied at 9-9. Redshirt senior Joey Gunther would come up with a clutch victory in the 174-pound bout. Taking on No. 23 Layne Malczewski, No. 22 Gunther was trailing, 5-3, late in the third, but forced a takedown in the closing seconds of the period to force overtime. Gunther then got a quick takedown at the start of Sudden Victory to win the match, 7-5, and put Illinois back in front of Michigan State, 12-9. Gunther is now 13-4 on the season.

After the Spartans took the 184-pound match to even the score, redshirt sophomore Matt Wroblewski faced off against Nick May in a critical matchup at 197. The two wrestlers went into Sudden Victory, tied 1-1, with escape points being the only scores of the match through the first three periods. Wroblewski then picked up the bout-winning takedown midway through Sudden Victory-1, winning the match over May, 3-1. Wroblewski’s win put Illinois back ahead of the Spartans, 15-12, going into the final match.

After Wroblewski’s win, freshman Luke Luffman looked to close out the dual in his matchup with Christian Rebottaro. Luffman scored two in the second with a reversal, and that would prove to be the difference. Tacking on the riding time point, Luffman won the heavyweight bout, 3-1, and clinched an 18-12 match victory for the Illini. 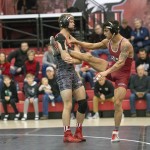